Please ensure Javascript is enabled for purposes of website accessibility
Log In Help Join The Motley Fool
Free Article Join Over 1 Million Premium Members And Get More In-Depth Stock Guidance and Research
By Travis Hoium - Apr 2, 2021 at 9:04AM

New business models are emerging in the autonomous ride-sharing market and some surprise companies are entering the arena. Polaris Industries (PII 5.84%) announced that it is partnering with Optimus Ride to bring a custom fully autonomous vehicle to market. 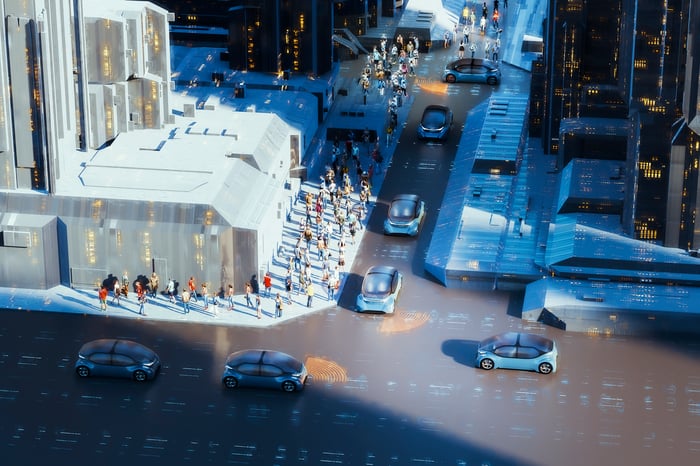 Last year, Polaris invested in Optimus Ride, which has been testing Polaris GEM vehicles -- small, no-frills, electric vehicles -- for two years, putting them through over 75,000 rides. This partnership aims to take Optimus Ride from the prototype phase to a fully developed, custom-made vehicle. Here's how the two companies put it in their press release:

Under this joint development agreement, an exclusive line of Polaris GEM electric low-speed vehicles (LSVs) will be manufactured to fully integrate Optimus Ride's autonomous software and hardware suite direct from the factory for deployment nationwide on streets in residential communities, corporate and academic campuses, and other localized environments.

As far as Polaris goes, GEM is a very small portion of the business that's gone almost unnoticed for years. While off-road vehicles, snowmobiles, and motorcycles garner most of the attention, GEM sits in the "global adjacent markets" segment that generated just $424.6 million of the company's $7.03 billion in sales during 2020. And it's only a small portion of that segment.

What a deal like this could do is make GEM a more well-known brand for local EV deployments. And if Optimus Ride grows its deployments at college campuses, urban areas, and retirement communities, this could be a valuable partner to have.

The modularization of vehicle manufacturing

I look at a deal like this as a similar strategy to what General Motors is doing with Cruise. Polaris is effectively making its GEM vehicles a modular input into Optimus Ride's autonomous ride-sharing platform, becoming a specialized supplier to what might ultimately be the more valuable part of the value chain. This leverages Polaris's manufacturing and design services and takes away the ups and downs of marketing, sales, and working with dealerships. That end of the business will be handled by Optimus Ride.

Becoming a supplier to a technology company like Optimus Ride, or in GM's case Cruise, may be the best way to stay profitable long term. We can see that these autonomous ride-sharing services are coming and as they do, the vehicle itself will be commoditized. Having partners to sell your manufacturing services to will be a solid, albeit potentially less profitable, business.