Please ensure Javascript is enabled for purposes of website accessibility
Log In Help Join The Motley Fool
Free Article Join Over 1 Million Premium Members And Get More In-Depth Stock Guidance and Research
By Daniel Foelber, Scott Levine, and Lee Samaha - Apr 10, 2021 at 5:00AM

These leading stocks are set to boom from $2 trillion in government spending.

With a price tag of $2 trillion in spending over the next 10 years, President Joe Biden's infrastructure plan, The American Jobs Plan, is a monumental push toward creating jobs and stimulating the economy. "Infrastructure" may conjure ideas of roads and bridges, which make up a respectable $115 billion of the plan -- we'll discuss that. But there's a whole other 95% allocated toward digital infrastructure (like high-speed broadband for all Americans), clean water infrastructure, investing in research and development, modernizing schools and hospitals, and a whole lot more.

We asked some of our contributors which companies they thought stood to benefit from Biden's new infrastructure plan. They chose Tetra Tech (TTEK 1.64%), ChargePoint Holdings (CHPT -7.31%), and Quanta Services (PWR 0.64%) 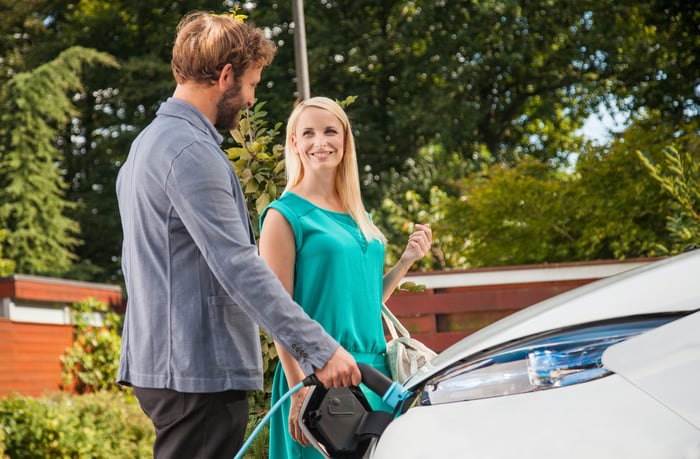 Tetra generates 30% of its revenue from federal spending, with 15% coming from U.S state and local spending, 25% from U.S. commercial spending, and the remaining 30% from international markets. As such, it has direct exposure to U.S. government spending on water and environmental programs, including water and wastewater treatment, stormwater, and disaster recovery.

Meanwhile, the Biden administration is seen as leading to more environmental regulatory requirements and renewable energy spending -- something that would benefit Tetra Tech's expertise in both areas within its commercial end markets.

In addition to a potential boost from an infrastructure bill, Tetra Tech has long-term growth potential from the need to maintain and build on water infrastructure. Also, given the growth in smart digital technologies (think analytics to detect leaks in water networks or smart metering to monitor usage or theft), it's likely that more utilities and public bodies will spend on high-end services and digital technologies.

Trading at 42 times current earnings, Tetra Tech isn't a superficially cheap stock. Still, the consulting business is all about scale, and some more critical infrastructural investment would quickly lead to revenue and profit margin expansion. Tetra is a stock to watch.

Daniel Foelber (ChargePoint): The largest share ($621 billion) of Biden's infrastructure plan is allocated for "transportation infrastructure and resilience." The biggest subcategory of that $621 billion is electric vehicles (EVs), which garners a staggering $174 billion, or nearly 10% of the whole plan.

According to a statement from the White House, the U.S. market share of plug-in EVs is one-third the size of the Chinese market. The American Jobs Plan calls for U.S. automakers to overhaul their supply chains and factories to make EVs and support battery development. It also calls for a network of 500,000 EV chargers by 2030, as well as electrifying public transit vehicles like school buses and federal fleets used by the U.S. Postal Service. Simply put, the bill supports American-made EVs and all the infrastructure that goes with them. Looking at the share prices of General Motors and Ford over the last six months, which are both outperforming Tesla, it's clear to see investors are optimistic about a countrywide EV rollout. 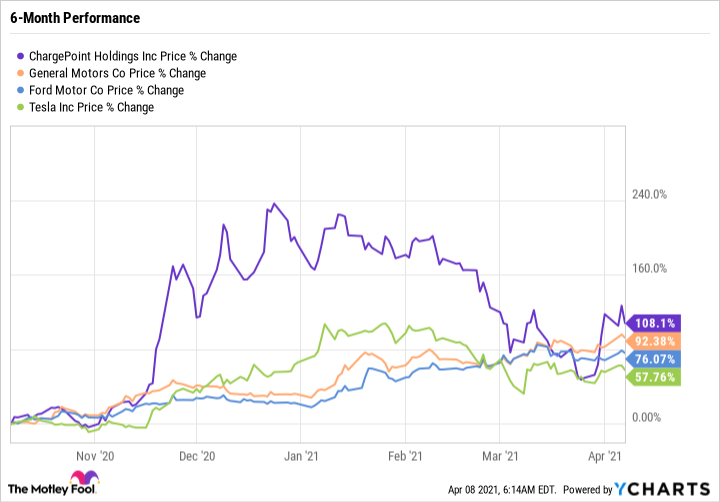 Supporting it all is ChargePoint, which controls 71% of the U.S. EV Level 2 charging network. At 240 volts, Level 2 chargers pack more punch than a standard 120-volt wall outlet. ChargePoint has been around since 2007 but merged with a special purpose acquisition company (SPAC) to go public on March 1. It serves commercial, fleet, and residential customers.

ChargePoint's business model is unique. Unlike gas stations that make money by selling gas, ChargePoint doesn't make money by selling electricity. Rather, it operates what it calls a "capital-light" model by selling its charging station hardware to customers. Customers can then subscribe to software that allows them to manage the charging stations. In the case of fleet customers, ChargePoint offers software for charging, scheduling, and reducing energy costs.

Subscription revenue was one of the few bright spots in ChargePoint's fiscal 2021 results, growing 40% year over year to make up 28% of total revenue. The company expects to grow revenue by 37% in fiscal year 2022. ChargePoint reported a net loss of $197 million in fiscal year 2021 and grew revenue by just 1%. However, its low growth rate is understandable given the absence of travel and less need to charge in public during the pandemic. ChargePoint is due for a surge in revenue growth in the coming years that looks to be amplified by the infrastructure bill.

The American Jobs Plan could supercharge this infrastructure stock

Scott Levine (Quanta Services): From rebuilding bridges to securing domestic supply chains, Biden's proposed plan addresses a wide swath of the nation's infrastructure. But one area that Biden is acutely focused on is the electrical grid. Citing a Department of Energy study that "found that power outages cost the U.S. economy up to $70 billion annually," the White House is requesting $100 billion from Congress to update the aging electrical grid. In addition, Biden seeks $35 billion to help combat climate change and "position America as the global leader in clean energy technology and clean energy jobs." In order to accomplish these goals, companies that are adept at providing electric power infrastructure solutions will be in great demand -- companies like Quanta Services.

It's not only the interest in modernizing the electrical grid that could be a boon for Quanta Services; Biden's enthusiasm for spurring growth in electric vehicles and charging stations could also help the company to prosper. But wait, there's more. It also can benefit from the interest in communications spending. One of the stated goals of the American Jobs Plan is to "bring affordable, reliable, high-speed broadband to every American." In this regard, Quanta Services can also benefit since the company provides communications infrastructure solutions. Already, excluding the implementation of the American Jobs Plan, Quanta Services estimates that it has an opportunity for $1 billion in annual revenue.

Even before the details of the infrastructure plan were revealed, Quanta Services appeared to be in a fortuitous position. During the company's fourth-quarter 2020 earnings presentation, it reported that it ended the year with a record $15.1 billion in backlog. Should Biden's plan come to fruition, Quanta Services can certainly expect that backlog to grow even further.

Should Stantec Inc.'s Weaknesses Concern You?