What happens to Roku when you don't need a streaming stick?

If you're buying a new TV these days, it's probably a smart TV. Over half of TVs currently in use are smart TVs and 70% of TV households have at least one smart TV, according to data from Hub Entertainment Research.

Growing adoption of smart TVs could eliminate the use of streaming devices from Roku (ROKU -4.01%) and Amazon (AMZN 0.67%), benefiting companies like Vizio (VZIO -0.40%) and Samsung. What's more, it could put pressure on the platform developers' relationships with television manufacturers. 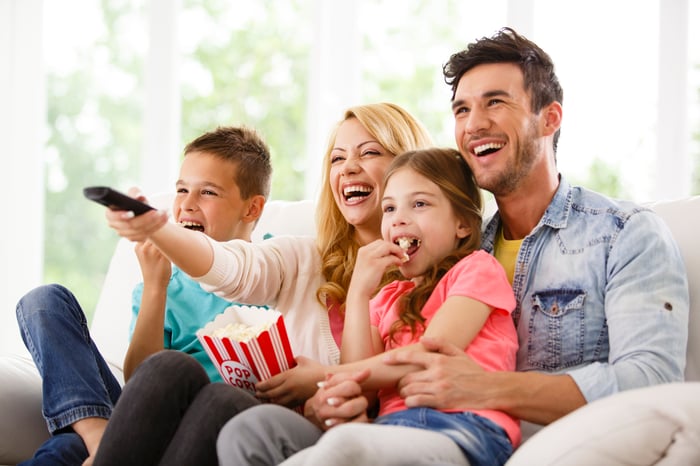 Breaking down the threat to Roku

David Tice, senior consultant to Hub and co-author of its Connected Home study, believes eliminating the need for a streaming stick or other connected-TV device could result in a negative impact on Roku's platform business. That's because "'eliminating of the middleman' will have a direct impact on how future revenue is split from advanced TV businesses like streaming, interactive shopping, and addressable advertising."

In other words, Tice thinks Roku's increased reliance on manufacturers to get its operating system into consumers' homes gives the TV makers more negotiating leverage against Roku.

Analysts have long questioned whether manufacturers will start demanding a revenue split from Roku. The streaming platform's annual average revenue per user reached $28.76 last year, with a gross margin over 60%. And that's recurring revenue every year. By comparison, Vizio generated less than $26 in gross profit per smart TV it shipped in 2020. And that's a one-off sale.

Some manufacturers may see the current disparity in profits and ask for more in compensation for putting Roku's operating system on their devices, so the argument goes. But Roku has several competitive advantages that will protect its platform business and enable it to keep its revenue share as is.

What Roku brings to the table

A lot of those new smart TVs everyone's buying, they're Roku TVs. While Roku's manufacturing partners made some excellent TVs, Roku brings a lot to the table that makes it the top-selling smart TV OS.

What's more, if the majority of new TV sales are smart TVs, small manufacturers can't afford not to work with a platform developer like Roku or Amazon. Creating a good connected-TV operating system is difficult and costly. On the other hand, Roku can bring its reference designs to a handful of electronics manufacturers and get a product line off the ground pretty quickly.

Second, Roku has a strong brand. The ability to put Roku's brand on its boxes is extremely valuable for smart TV manufacturers.

Third, Roku develops relationships with retailers for placement in stores, including preferred shelf space and displays. That boosts sales for manufacturers without boosting marketing expenses.

The shift to smart TVs could help Roku

As mentioned, Roku is the No. 1 smart TV brand in the U.S. The company has gained market share each year since it went public in 2017 as it expands the number of manufacturing partners and it builds its brand.

As a result, more consumers' default option for their connected-TV platform is Roku OS. That gives Roku a significant advantage over its competition in the connected-TV device space like Amazon. Amazon may actually sell more stand-alone Fire TV devices than Roku sells of its own devices. But the disparity in Fire TV smart TV sales and Roku TV sales is massive.

If a household buys a new smart TV with Roku OS pre-installed, it may be inclined to get a Roku stick for its old TV, too. That could result in continued growth in engagement per account, which has steadily climbed higher each quarter as well. That should translate into even greater revenue per user.

The threat of manufacturers demanding a share of revenue from Roku is overblown. The growing popularity of smart TVs makes the tech company an even more essential partner to manufacturers, not the other way around.