Please ensure Javascript is enabled for purposes of website accessibility
Log In Help Join The Motley Fool
Free Article Join Over 1 Million Premium Members And Get More In-Depth Stock Guidance and Research
By Nicholas Rossolillo, Anders Bylund, and Billy Duberstein - Apr 18, 2021 at 7:00AM

5G networks are live, but far from fully developed.

2021 will go down as the year nationwide 5G networks made their debut -- at least in the U.S. It was the culmination of years of research and buildout of new network equipment operating behind the scenes, but the movement is far from over. Network providers are in a never-ending process of improving performance and expanding coverage, and consumers have only just begun purchasing devices that can connect to 5G. Though stocks that play in the space had a great run since last summer, there's plenty of room for some of them to run higher. To that end, three Fool.com contributors think Skyworks Solutions (SWKS 1.79%), American Tower (AMT 0.90%), and Western Digital (WDC -0.05%) are a buy right now.

Nicholas Rossolillo (Skyworks Solutions): After a few years of slumber that started in 2018 (the start of the last chip and tech hardware downturn, hastened by the U.S.-China trade war and culminating in the economic lockdown last spring), Skyworks Solutions has been on a tear. Shares of the connectivity chipmaker are up nearly 60% since the start of 2020. However, even after the big jump higher, the stock trades for 36 times trailing-12-month free cash flow.

Sure, it's not the cheapest name in the semiconductor industry. But I like where Skyworks is at right now. It's poised to benefit from a massive 5G smartphone upgrade cycle. Its largest customer, Apple, makes up about half of sales, so it has a lot to gain as iPhone fans purchase a new device with a 5G connectivity chip. It's won some other design contests for other tier one smartphone makers that could send sales soaring higher for the rest of this year, and its non-smartphone portfolio (about one-quarter of revenue) is also growing by double-digit percentages as businesses and consumers start to upgrade to Wi-Fi 6 hardware.

As to specific growth figures, Skyworks' first-quarter 2021 revenue grew 69% year over year to $1.51 billion and management forecast second-quarter sales to jump 50% from a year ago to about $1.15 billion. I'd expect the trajectory to moderate as the year progresses, but I nonetheless think demand will remain high for some time. A global chip shortage is putting a top on how many devices manufacturers can crank out right now (which should extend this sales up cycle for a while). Additionally, tech researcher Gartner estimates smartphone shipments will increase 11% in 2021, but only about one-third of phone shipments will be equipped with 5G hardware. It's a big jump from very few 5G phones sold at all in 2020, but hundreds of millions of consumers around the globe will still end 2021 without 5G.

Put another way, this next smartphone upgrade supercycle is only just beginning this year. Skyworks Solutions is in prime position to sell lots of next-gen connectivity equipment for the foreseeable future. Shares aren't totally unreasonable given the rosy outlook, so now's the time to give this semiconductor leader another look. 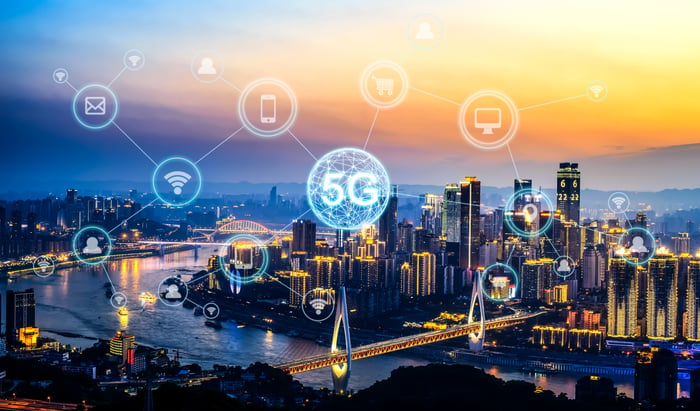 The best of many worlds

Anders Bylund (American Tower): Mobile devices, their components, and the network operators that serve them are crucial pieces of the 5G networking puzzle, but none of them matter without a nationwide network of cell towers. That's where American Tower comes in.

The company operates 186,000 towers and small cell sites around the world. Despite the all-American name, American Tower is a global giant. Only 43,000 of the operating sites are found within the U.S., with large tower networks in high-growth markets such as Mexico, Brazil, and Nigeria. American Tower's largest market is actually India and its 76,000 cell sites.

American Tower owns and maintains the physical infrastructure around each communications base station, leaving the networking technology to its tenants. Adding more clients to an existing tower is an effective way to increase the revenue generated by that site at a forgettable cost of capital upgrades. Allowing each customer to move in more equipment is another method. 5G networks are particularly well suited to support edge computing, which gives AMT another opportunity to boost its revenue per installation.

I'm talking about a highly profitable company with a generous dividend policy. American Tower's adjusted earnings before interest, taxes, depreciation, and amortization (EBITDA) increased by an annual average of 14% in the last decade. Dividend payouts have doubled in four years, offering an effective yield of 2% today. Meanwhile, the stock has gained just 8% since the start of 2020. The S&P 500 rose 29% in the same period.

That's how American Tower offers a unique combination of 5G-based growth, bountiful dividends, and reasonable share prices. It really is the best of several worlds.

All of that 5G data needs to be stored somewhere

Billy Duberstein (Western Digital): The advent of 5G will bring with it a massive amount of data flying back and forth among customers, businesses, and the data centers in between, both in the cloud and at the edge.

IDC anticipates data creation will grow at a 23% annual growth rate between 2020 and 2025. Even more stunning, that means the world will create over two times the amount of data during those years as the entire amount stored since data storage was created! Massive data storage needs could spell good things for Western Digital, which produces the two dominant types of data storage today: hard disk drives and NAND flash.

The data storage industry is coming off of a rough two years since the beginning of the U.S.-China trade war. Western Digital's profits have plummeted, and the company suspended its dividend after new CEO David Goeckeler took over last year, opting to use all excess free cash flow to pay down debt.

Yet there is reason for optimism. First, Western Digital's profitable HDD business, while thought to be in decline due to the rise of the faster and more dynamic NAND flash, should have longevity thanks to the massive storage needs of cloud data centers.

But perhaps more important, NAND flash prices, which have plummeted over the past two years amid oversupply, are supposed to grow about 3% to 8% this quarter, according to Trendforce. That may not seem like much, but it's actually rare, since NAND flash prices tend to decline over the long term. Flash producers attempt to keep pace with cost reductions from more advanced manufacturing techniques. For its part, Western Digital targets 15% per-bit annual cost declines.

While NAND flash is definitely a growth industry, it has more competitors than the more consolidated (and more profitable) DRAM memory and HDD industries, each of which only has three large players.

However, that could be changing. Last year, Intel (INTC 0.82%) agreed to sell its NAND Flash unit to SK Hynix. More recently, the Wall Street Journal reported Western Digital and another rival were considering buying Japan's Kioxia, the private equity-owned NAND flash producer that used to belong to Toshiba. Western Digital may have a leg up, as it's already a joint venture partner with Kioxia, and the two companies share manufacturing facilities.

If Toshiba is bought, either by Western Digital or someone else, the major NAND producers will have gone from six to four -- a significant consolidation that could lead to structurally better profit margins. Of course, there are also rising Chinese NAND players to watch out for, so consolidation may be necessary.

If a deal for Kioxia happens, significant industry consolidation right at the beginning of a potential NAND price up cycle could be a recipe for success for all industry players -- especially Western Digital, the stock that's perhaps most closely tied to NAND flash prices.