Please ensure Javascript is enabled for purposes of website accessibility
Log In Help Join The Motley Fool
Free Article Join Over 1 Million Premium Members And Get More In-Depth Stock Guidance and Research
By James Brumley - Apr 22, 2021 at 8:30AM

Don't blindly believe the hype. Plenty of retailers are still connecting with consumers.

The so-called "retail apocalypse" may still be in full swing, but it's a mistake to assume that every brick-and-mortar name is in trouble. Retailers just need to make sure they're positioning themselves properly with the right products in the right place at the right price.

Granted, that's easier said than done, but it's not impossible. Here's a rundown of four retailing stocks investors can actually get excited about owning this year and beyond. Notice that all four of them are specifically focusing on things like price, place, and product.

1. Farm for profits with Tractor Supply

Consumers were slowly falling in love with the idea of self-sufficiency and nicer gardens even before COVID-19 took hold in the United States, but the pandemic accelerated the trend. Tractor Supply (TSCO 1.27%) saw its sales grow 27% in 2020, with same-store sales improving to the tune of 23%. 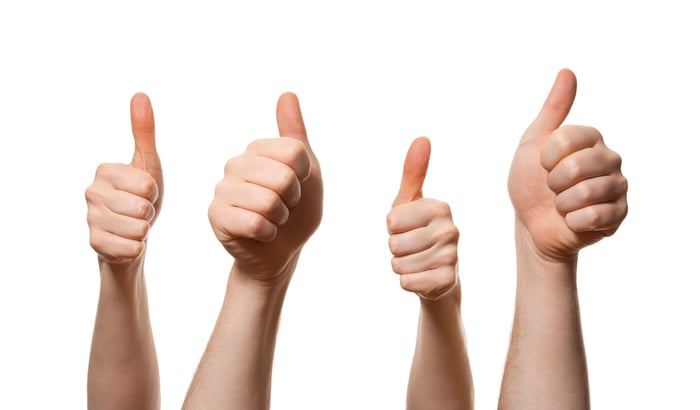 Analysts expect sales to slow dramatically this year, which should in turn drag the bottom line from last year's $6.87 per share to $6.74. Don't underestimate this company, though, as the analyst community often does. This lifestyle retailer tops earnings estimates far more often than it doesn't, and this year's bar is set relatively low.

Whatever's in the cards this year, know that Tractor Supply has a strong second act ahead. Analysts are calling for record earnings of $7.24 per share next year, driven by reaccelerated sales growth.

2. Bed Bath & Beyond has moved beyond its past

Although up from its low hit last April, Bed Bath & Beyond (BBBY -5.23%) remains a long-term underperformer. While most stocks have hit record highs this year, even with its recent rally off of last April's low Bed Bath & Beyond is still valued at only a third of its peak price from early 2015. This company just didn't adapt well enough -- or soon enough -- to the new norms in the world of retailing, like omnichannel shopping and a product mix that differentiates the brand.

If you've already written the retailer off, you may want to put it on your radar again. This is not yesteryear's Bed Bath & Beyond. Though he's been at the helm for less than two years (and one of those years was complicated by the coronavirus), CEO Mark Tritton has made sweeping changes that are having an effect. New inventory-management technology and less cluttered stores are hallmarks of the overhauled home goods store chain, but what shoppers are most likely to notice are a bunch of new exclusive brands and similarly exclusive owned brand products. This week's debut of Haven marks the third of eight new private label brands the company is launching this year. Private label goods are not only more profitable to the retailer, but fill in product gaps.

Whatever Tritton is doing is working. The company's fourth-quarter same-store sales growth of 4% is the third quarter in a row Bed Bath & Beyond has logged such progress.

3. Not the Dollar General you remember

With at least 30,000 of them peppered across the country, the dollar store industry looks quite saturated. The biggest (and arguably the best) name in the business, however, is moving forward with big growth plans. That's Dollar General (DG 0.60%). Though it employs more than 157,000 between its 17,266 stores and support facilities, it's looking to hire as many as 20,000 more before the end of the month. The plan speaks volumes about the amount of untapped opportunity that's still out there.

Not all of these workers will necessarily be working for or at a Dollar General store. In October the retailer unveiled a new store concept it's calling popshelf, aimed at larger, more urban markets that haven't quite been the company's target in the past. These customers also generally earn more than their rural counterparts, and as such will see a different mix of merchandise.

Between popshelf and Dollar General's deeper dive into more fresh foods, the company's got plenty of room to grow in the future.

Yes, it's a painfully obvious pick. It's also a less-than-thrilling one. After last year's pandemic-driven sales surge of nearly 8% and its corresponding 10.6% increase in operating income, investors are bracing for a slight revenue contraction this year. The company's also warned us it's planning to make $14 billion worth of capital expenditures this year versus its more normal capex figure of around $10 billion, further chewing into this year's bottom line.

Think bigger picture though. These investments are largely being made in automation and in its supply chain, which will help make the company into the efficient e-commerce player it didn't have time to become in the midst of the COVID-19 pandemic. With just a little more time and tweaking, Walmart will finally be in a position to put pressure on e-commerce powerhouse Amazon.

And these tweaks are evident in the longer-term outlook. Analysts are calling for record earnings of $5.83 per share next year on the heels of 3% sales growth, which is quite solid for a company of this size. The stock's relative weakness since November's high (it's down 8% since then) only makes Walmart an even more compelling prospect.

2 Growth Stocks to Buy in April