Please ensure Javascript is enabled for purposes of website accessibility
Log In Help Join The Motley Fool
Free Article Join Over 1 Million Premium Members And Get More In-Depth Stock Guidance and Research
By Selena Maranjian - Apr 23, 2021 at 6:06AM

Fat dividends, the promise of robust growth, or both? Check out these contenders for your portfolio.

We're all going to need money in retirement, and one good way to build a fat portfolio for your future is to fill it with companies that are likely to have their stocks grow in value over time -- while they regularly kick out cash to you in the form of dividends.

Here are three such companies to consider. There's a good chance you've only heard of one of them. 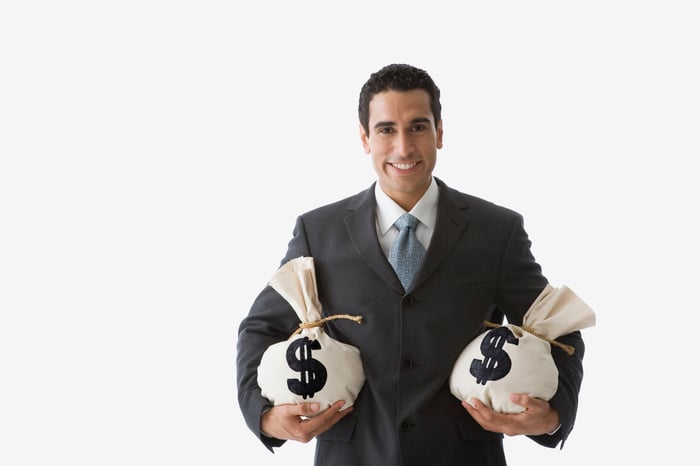 Perhaps the most obviously attractive thing about Enbridge (ENB 0.95%) is its dividend -- which recently yielded nearly 7.1%. Better still, it has upped that payout for 26 consecutive years.

So what does the company do? It's a midstream oil and gas company. In the energy business, an upstream enterprise is busy exploring for and extracting fuel, while a downstream one, like a refinery, puts the finishing touches on it, converting it into a marketable form. Midstream specialists, meanwhile, do the middle part of this big process -- transporting and storing fuels such as oil and natural gas.

Enbridge, based in Canada, has pipelines that transport about a quarter of North America's crude oil and about a fifth of the natural gas used in the U.S. It even has a renewable power generation business. You may worry about Enbridge's dependence on fossil fuels for much of its profits because fossil fuels are giving way to alternative energies such as solar and wind. But that's not happening quickly, and we're likely to require oil and gas for quite some time. An arguably more worrisome aspect about Enbridge is its heavy use of leverage -- i.e., taking on debt. So far it has been managing its debts, even in our recently challenging economic environment.

If you're intrigued, read more about Enbridge and see if you think its risks are outweighed by its strengths -- and its 7% dividend, which can generate $700 and more annually from a $10,000 investment.

Recently yielding a hefty 4.9%, International Business Machines (IBM -0.05%) is an intriguing tech stock to consider for your portfolio. It has struggled over the past decade or so, not quite keeping up with a changing technological landscape. But it's got a new plan and focus now, and a newish CEO in Arvind Krishna. The company is planning to split up, spinning off what used to be its primary focus -- computer hardware for businesses. IBM will end up a smaller company, focused on growing niches such as artificial intelligence and cloud computing -- which means it will be capable of growing more briskly.

In fiscal 2020, IBM's revenue declined about 4% year over year, but in his letter to shareholders, Krishna noted that cloud-related revenue grew 20% on an organic basis, making up a third of IBM's total revenue. He added:

Free cash flow is the fuel for our growth, and for the year we generated a solid $18.2 billion of net cash from operations and free cash flow of $10.8 billion. ... We continued to return capital to our shareholders in the form of $5.8 billion in dividends. We raised the dividend for the 25th consecutive year in an uninterrupted 105 years of paying a dividend.

This is a company you may well be unfamiliar with. Sometimes likened to Warren Buffett's Berkshire Hathaway, Boston Omaha (BOC 5.57%) is somewhat similar and a whole lot smaller, with a recent market value under $1 billion, compared to more than $625 billion for Berkshire. Like Berkshire, Boston Omaha (which actually does have Buffett's grandnephew as a co-CEO) owns a variety of businesses (entirely or partially) and shares of stock in a variety of companies.

Areas of focus for the company include advertising, insurance, telecommunications, and real estate, and one of its specialties is the billboard business (it owns more than 3,000 billboards). Its companies include Link Media Outdoor, Logic Commercial Real Estate, Crescent Bank, 24th Street Asset Management, General Indemnity, Dream Finders Homes, AireBeam, and Utah Broadband. It has even launched a special purpose acquisition company (SPAC) in order to bring privately held businesses public.

This is still a very small business, and if it manages to grow as it aims to, it has a big runway ahead of it. As of March, though, it had just 217 employees. Investing a portion of your retirement portfolio in Boston Omaha won't be like getting in on the ground floor of this company, but it will be close.

These are just some of many companies that could bankroll your retirement. If any of them interest you, dig deeper into them so that you can understand them better. Or just keep looking, as there are plenty of other great companies that can build your wealth powerfully over time.

This Stock Is Like a Mini-Berkshire Hathaway, and It Could Soar Soon