Please ensure Javascript is enabled for purposes of website accessibility
Log In Help Join The Motley Fool
Free Article Join Over 1 Million Premium Members And Get More In-Depth Stock Guidance and Research
By Jeremy Bowman - Apr 24, 2021 at 10:15AM

The stars are aligning for a digital advertising boom.

There's no doubt that the economy is heating up.

Retail sales jumped nearly 10% from February to March, fueled by stimulus checks, increasing vaccination rates, and a strong desire to return to normal life. CEOs sound as bullish as they have in a long time. JPMorgan Chase CEO Jamie Dimon said the emerging economic boom could last through 2023. Brad Jacobs, the CEO of XPO Logistics, said that GDP growth could potentially reach 10% this year. 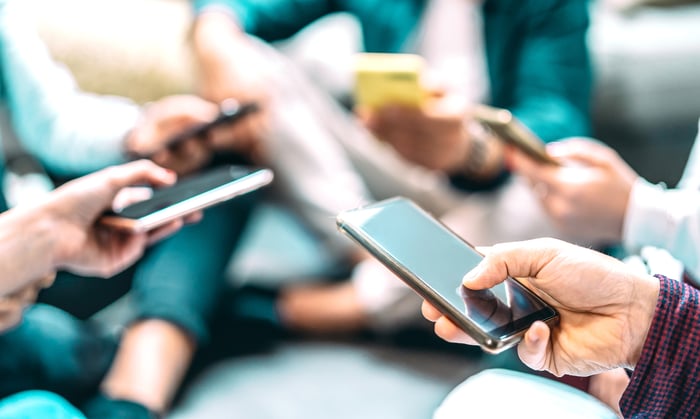 The rising stock market is yet another bullish signal for the economic recovery. All of this is good news for cyclical stocks, which thrive in strong economies, but it's especially promising for advertising stocks, which are also cyclical and look primed to take advantage of the reopening as retailers and other businesses that have suffered through the pandemic are desperate to get customers back. The digital advertising industry is already coming into 2021 with strong momentum, having seen sales ramp up in the second half of last year in spite of pandemic-related headwinds.

In fact, there are already signs that ad spending spiked in the first quarter. Online media platforms like, Insider, formerly Business Insider, Bloomberg Media, Bustle Media Group, and Vice all posted ad revenue growth between 25% and 30% in the first quarter, according to The New York Times, and ad agency conglomerate GroupM projected that digital advertising would grow 22% this year, up from 7% in 2020.

Those signals are all overwhelmingly positive for digital advertising stocks.

How to take advantage of it

Both of these sectors saw breakout growth last year as digital advertising benefited from an accelerated transition during the pandemic with advertisers shifting their budgets away from traditional media and toward digital platforms. That momentum is likely to stick as these technological shifts like video streaming, e-commerce, and digital media consumption were already taking place before the pandemic, and have gained more relevance because of it. Advertisers are following the eyeballs to digital media, and many of them prefer the data-rich nature of digital ads. .

All of these stocks have handily beat the S&P 500 since the beginning of 2020, and six of them more than doubled in value. 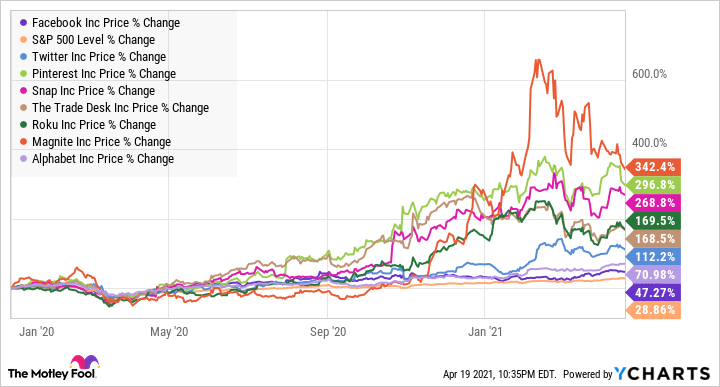 High expectations may be priced into these stocks, given their strong growth over the past year, but if the economic rebound is even stronger than expected, these ad stocks should all benefit.

All eyes on Snap

Snapchat parent Snap (SNAP -0.69%) will kick off earnings season for digital advertising stocks after hours on April 22. Analysts expect revenue growth to be slightly ahead of the company's guidance, calling for a 60.6% increase in the top line to $742.8 million. Snap delighted investors earlier this year, when management said it expected to deliver 50% revenue growth for the next several years, which shows both the strides the company has made in developing its ad products and strong demand from advertisers.

In addition to the numbers from the first quarter, investors should also pay attention, with the recovery just starting to hit its stride. Economic growth is expected to peak in the second half of the year as most Americans should be fully vaccinated by then and able to return to the kind of activities they enjoyed before the pandemic, like travel, live entertainment, and eating and drinking in restaurants and bars.

With the stock market at all-time highs and Americans flush from stimulus checks and savings from the pandemic, the economy is primed to take off. Keep an eye on Snap's report on Thursday as strong numbers from the social media stock could unleash another bullish wave for its digital advertising peers.