Please ensure Javascript is enabled for purposes of website accessibility
Log In Help Join The Motley Fool
Free Article Join Over 1 Million Premium Members And Get More In-Depth Stock Guidance and Research
By Billy Duberstein - Apr 26, 2021 at 7:30AM

The current upcycle could last longer than prior semiconductor booms. That means there's still opportunity.

Last week, key semiconductor equipment supplier ASML Holdings (ASML 2.41%) reported its first-quarter earnings. The company delivered positive results while raising its full-year 2021 growth outlook to 30% -- even coming off a strong 2020. The stock climbed on the news. 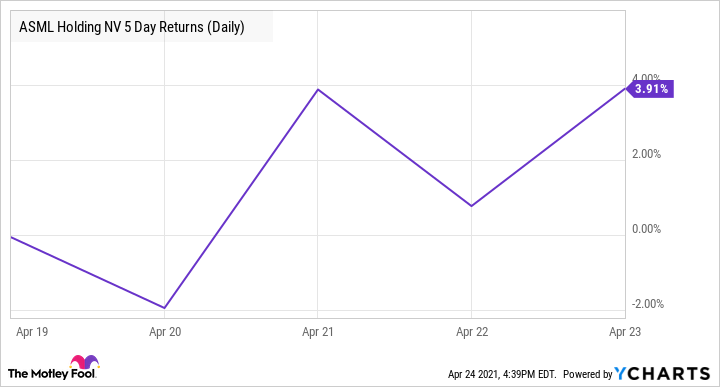 ASML sells not only EUV lithography systems that make leading-edge logic semiconductor production possible, but also DUV systems that produce chips on lagging-edge nodes, along with e-beam metrology systems. It also serves the memory sector across both NAND and DRAM.

As such, ASML management is a great source of insight into the entire chip sector, which has become the focus of investors and politicians alike amid the recent shortage. While the semiconductor sector is known to be cyclical, several quotes from the recent earnings conference call suggest this current boom could go on for years. 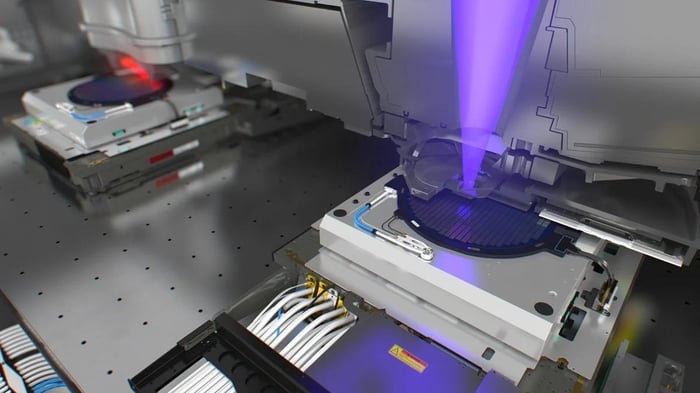 3 bullish trends all happening at once

You've probably read about the massive global semiconductor shortage, which first affected auto suppliers but has since spread to many other parts of tech. CEO Peter Wennink shared his take on the key reasons for the current supply-demand imbalance, which is the result of three massively bullish trends occurring all at once:

The first trend, in the shorter term there is a more cyclical or "catch-up" driven demand from decisions made in 2020 due to the global pandemic. ... The second, is a secular growth trend driven by the digital transformation taking place as we become a more connected world, across both people and machines. This transformation was further accelerated over the past year with the increased remote activity and reliance on technology to stay connected. ... And the third trend, which we are starting to see now and which we will likely continue to see longer term, is the desire for more technology sovereignty which includes semiconductor and silicon based technology, leading to a geographical decoupling as different governments put initiatives in place to localize supply chains and become more self-sufficient. This inevitably will create some level of inefficiency in the semiconductor supply chain and creates additional equipment demand as more fabs are strategically built across the globe.

The industry is coming off a big downturn spurred by the 2018-2019 trade war, and then COVID hit in 2020. The previous downturn led to caution on the part of OEMs in ordering chips and suppliers in adding capacity.

However, not only are we getting the cyclical bounceback from the extended downturn, but the pandemic also accelerated digital trends, leading to a massive upswing in semiconductor demand. On top of that, with all developed nations now looking to secure some capacity domestically, there will probably be some excess capacity built into the system now, which means even more sales of semiconductor equipment. 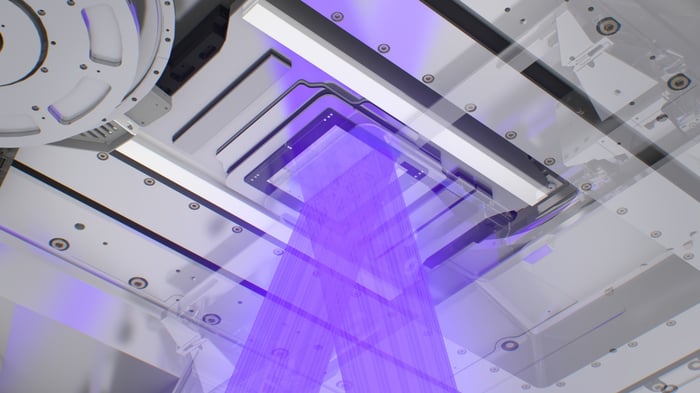 EUV demand could outstrip supply beyond next year

Not only are there shortages of end-market semiconductor chips made by ASML's machines, but there could also be shortages of the semi equipment machines themselves by next year. Wennink went on to say:

Limited by available modules and parts this year, we're still planning for growth of around 30% in EUV revenue this year. With the expanding adoption of EUV at our customers, we see increased demand building in 2022 and beyond. We are improving our manufacturing cycle time and are planning our supply chain for a capacity of around 55 systems next year and as a reminder, all of our planned shipments in 2022 will be NXE:3600D systems with the increased productivity capability.

And there still appears to be growth beyond 2022. One analyst brought up the prospect of needing to increase capacity beyond 55 machines after 2022. Management said it was a distinct possibility that it's working through now, given that the U.S. may be looking to increase foundry capacity, with Intel (INTC 1.46%) announcing two new fabs and Taiwan Semiconductor Manufacturing (TSM 1.50%) announcing it would build a large fab in the U.S. as well. The construction lead time for a new foundry is two to three years, so bringing those online should create demand even beyond the 2022 guidance. 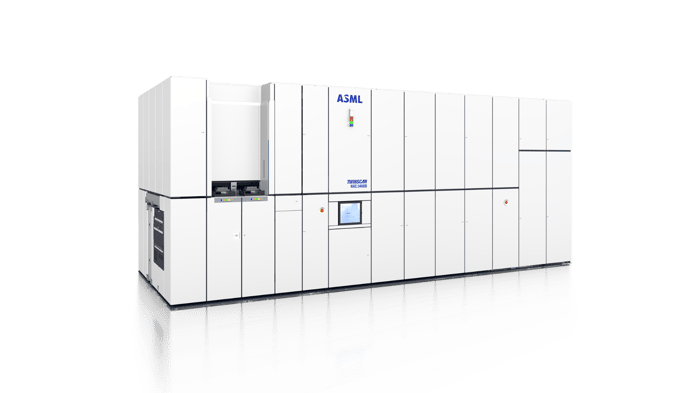 Even DUV and mature nodes are in for reacceleration

While a lot of attention goes toward EUV and the latest, most advanced chips, the Internet of Things, autonomous vehicles, and "smart everything" applications run on sensors and RF filters made on older nodes. That's leading to a renewed boom in demand for older DUV machines for less-advanced nodes, which still make up a majority of ASML's revenue.

In fact, with EUV capacity already booked up for the year, it's the increased DUV demand that spurred ASML to increase its revenue outlook for the year. And management sees this DUV boom as greater and broader than the last upcycle in 2017-2018:

[A]s compared to three years ago 2018, I think we have a different view and that's driven by the fact that across our entire Deep UV portfolio which is immersion and dry, we have -- we cannot fulfill the demand of our customers on time and that has to do with the fact that our analysis shows that with the combination of, let's say, advanced sensing technology, 5G, the ability to process all that data through high performance compute and that in a distributed fashion basically leading edge compute also goes to the edge, I call that distributed systems and a distributed system is, for instance, a car, but it's also one of our machines in the field. ... And that increasingly requires collection of data, transport of data, processing of data not only through the most advanced high-performance compute, but as part of a distributed system. And that system inevitably includes mature technology, which could be image sensors, power ICs, MEMS, analogs solutions. It's the whole thing.

Thus, high-performance chips in 5G and big data/AI applications, rather than replacing older nodes, are counterintuitively spurring a demand boom on the lagging edge as well. That's leading to surging demand for ASML's older and highly profitable machines as well. And don't forget memory: "We are just starting"

ASML also makes DUV and e-beam machines for the memory industry, and some DRAM players are even beginning to use EUV in DRAM production these days.

Another part of the increase in ASML's 2021 guidance was an increase in memory machine growth to 50% for 2021, up from an initial 20% growth outlook. That eye-popping 50% growth number made some analysts nervous, who remember past instances when memory capital spending got way ahead of itself and led to oversupply. In fact, that happened as recently as 2018.

Still, Wennink, again, thinks the memory up-turn is more sustainable into next year as well:

[I]f you look at a bit growth of 20% this year, then our calculations show that we are very quickly at the max output capacity of our DRAM customers in this year, where we would reach that pretty quick. So we would need more capacity addition. That's exactly what we have seen. So I think it's just the beginning of all these things. So, yeah, I think, yes, [memory machine growth] will move into next year. Now you've been around also long so that in the Memory business, yes, there is more tendency to have from time to time some overcapacity and some under capacity. How long that will last, I don't know, but still there is something about telling me, hey, the secular trend when such a high demand in Logic, all this stuff doesn't only work with only Logic, also in Memory... Now I think having said that, Memory is more cyclical than Logic, but nothing that indicated to me at this moment in time that we are looking at building an overcapacity. There is nothing I can see at this moment in time. We're just starting.

Investors in the semiconductor sector know all too well that just as boom times feel terrific, busts can be just as harrowing. As such, many may be nervous about investing in the midst of such a severe upswing.

Still, if ASML management's commentary is any indication, there are some deeper structural and secular things going on right now that may give the current cyclical upswing longer legs than some may think. While semiconductor stocks have admittedly gone up a lot since November, they are still by and large much cheaper than, say, software-as-a-service stocks, even though they all play into the same technology trends.

So with eyes open, I'd stick with these booming semi stocks through 2021 and into 2022 for now.