Please ensure Javascript is enabled for purposes of website accessibility
Log In Help Join The Motley Fool
Free Article Join Over 1 Million Premium Members And Get More In-Depth Stock Guidance and Research
By Daniel Foelber, Scott Levine, and Lee Samaha - May 1, 2021 at 6:00AM

The global chip shortage could present a buying opportunity for savvy investors.

Aside from impacting everyday life, the COVID-19 pandemic also took a toll on the global supply chain. Only now are we beginning to realize the magnitude of this disruption, especially in the semiconductor industry.

Throughout the pandemic, consumers shifted their spending from services to goods like cars and electronic devices. And with the global economy starting to boom, other industries are following suit. The result has been a global chip shortage, which is straining suppliers around the globe.

With that, we asked some of our contributors which semiconductor stocks could benefit from the rising demand for chips. They chose Taiwan Semiconductor Manufacturing (TSM -0.07%), Entegris (ENTG 0.69%), and NXP Semiconductors (NXPI -0.29%). 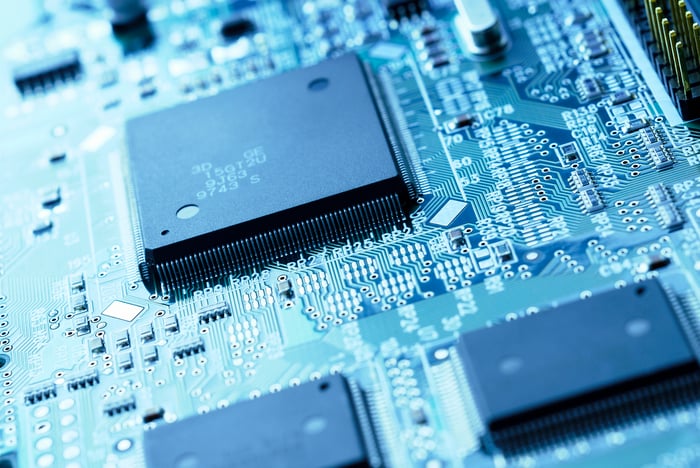 The Saudi Aramco of chipmakers

Daniel Foelber (Taiwan Semiconductor Manufacturing): History tells us that each era is defined by a different commodity. From foodstuffs like rice and wheat, and sugar and salt, to steel and coal, then oil and natural gas -- the relevance of a commodity can tip the balance of geographic regions. Just as oil amplified the power of the Middle East, so too are chips giving rise to China, South Korea, and Taiwan.

Few tailwinds transcend sectors, and chips are one of those tailwinds. Chips form the bedrock of the digital age and will likely only increase in importance as devices and machinery become ever more connected.

Taiwan Semiconductor Manufacturing is like the Saudi Aramco of chipmakers. With a market cap of $550 billion, it is the 11th-largest U.S.-traded company and the third-largest foreign company available on U.S. exchanges (behind Tencent and Alibaba). Taiwan Semi is widely regarded as having the largest and most sophisticated production capability in the world -- making it responsible for producing many of the chips that the global supply chain relies on.

Taiwan Semi is growing fast, especially for a company of its size. After notching record-high revenue, net income, and spending in 2020, the company is guiding for a staggering $30 billion in 2021 capital expenditures, which is nearly double what it spent last year. 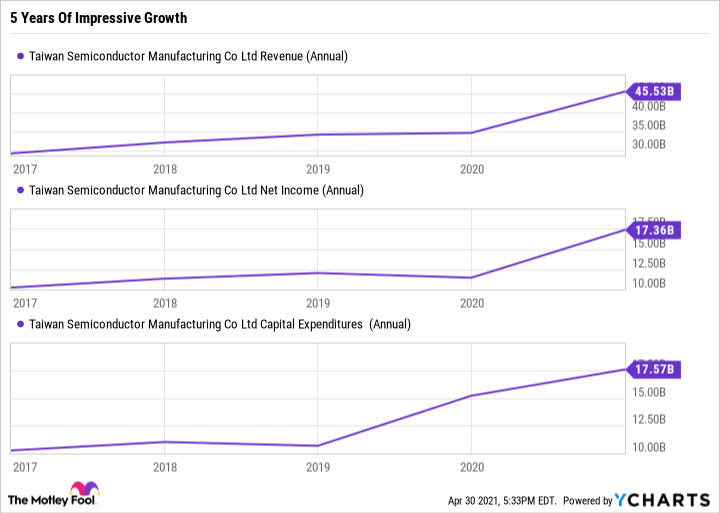 Eighty percent of that figure is going toward advanced process technologies like 3-, 5-, and 7-nanometer chip production in an effort to stay ahead of competitors like Samsung and Intel. Seventy-five percent of Taiwan Semi's first-quarter revenue came from smartphones and high-performance computing, but the company is seeing rapid growth in other industries like Internet of Things (IoT) and automotive. With a P/E ratio of 31, Taiwan Semi isn't necessarily a cheap stock. But its market-leading position and growth trajectory makes it a core chip stock to buy and hold over the long term.

Advanced technologies to meet the moment

Lee Samaha (Entegris): It's no secret that the semiconductor industry is in a hurry to ramp volumes and capacity to meet end demand and take advantage of high prices. Thus, there's going to be a capital spending boom in the industry. In such situations, semiconductor manufacturers may well increase spending on more advanced technologies that reduce costs and improve performance.

That's where advanced materials and process solutions company Entegris comes in. The company generates 90% of its revenue from the semiconductor industry. Given that 70% of its total revenue comes from products consumed during the manufacture of semiconductors, it's fair to say Entegris is a direct play on a ramp in industry volumes. Entegris' specialty chemicals, micro contamination controls, and advanced materials handling solutions make it a play on the need to increase purity in production and use new materials to improve semiconductor performance.

Current trading conditions are strong and strengthening. During the recent earnings call, management upgraded its expectations for its end markets to grow 13% to 14% in 2021 compared with a previous estimate of 7% to 8%. Meanwhile, it expects to increase sales by 17% to 19% versus an earlier estimate of 11% to 13%.

Therefore, Wall Street analysts now expect the company's sales to hit $2.4 billion in 2022 -- a year ahead of the illustrative model that Entegris gave in November of last year. In a sense, you could think of the current boom as pulling forward a year of sales for Entegris -- a good demonstration of how leveraged the company is to increased spending on semiconductors. Throw in a long-term runway of growth coming from the inexorable rise of IoT spending, and Entegris stands very well placed for many years of growth.

Hitch a ride with this chipmaker

Scott Levine (NXP Semiconductors): From Apple and its iPads to Caterpillar and its mining and construction equipment, the ripple effects of the global shortage of semiconductors are affecting companies across a wide swath of industries. But savvy investors, undoubtedly, recognize an investment opportunity. The likely challenge for them, however, is where exactly to turn? With so many semiconductor stocks on the market, the choices can seem overwhelming. Fortunately, the search can come to an end since NXP Semiconductors represents a compelling opportunity -- not only for the short term as the semiconductor shortage plays out but for the long haul.

Of course, there's no guarantee what the future has in store for the company (and its investors), but a look in the rearview mirror suggests that this stock certainly has the potential to provide market-beating returns. Over the past year, its shares have risen 82%, while the S&P 500 has climbed 43%. Extend the time horizon out to when NXP held its IPO, and the contrast becomes incredibly apparent. Since August 2010, when NXP Semiconductors hit the public markets, the stock has skyrocketed 1,280%, vastly outperforming the S&P 500, which has climbed 272%.

In terms of its financials, NXP Semiconductors is coming off a strong start to 2021. The company recently reported revenue of $2.57 billion, slightly better than analysts' expectations of $2.56 billion. But it's the bottom of the income statement where the company really shone. Whereas analysts were expecting the company to report earnings per share (EPS) of $2.27, NXP Semiconductors reported EPS of $3.22. While generating a profit is obviously important, I find it more compelling how the company has consistently generated strong cash flow. With creative accounting, companies can "massage" noncash charges to present misleading EPS figures; cash flow, however, provides a more reliable sense of the company's finances. In the first quarter, NXP Semiconductors reported $732 million in operational cash flow, a 43% year-over-year increase. And it's not only the company's recent feat that I find compelling; it has a long track record of growing cash flow (both cash from operations and free cash flow) at a greater clip than that at which it's growing revenue. 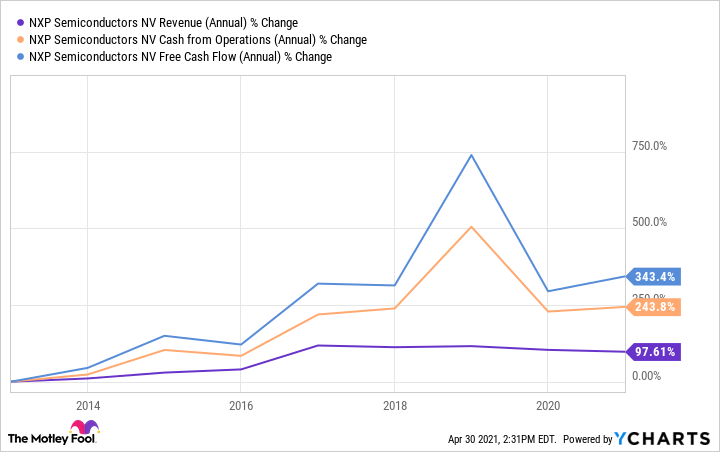 While the company provides semiconductors to various industries -- Industrial IoT, mobile, and communications infrastructure -- I think that the company's dedication to gaining a greater foothold in the automotive market will be of particular benefit to shareholders. Addressing the automotive vertical, for example, Kurt Sievers, the company's CEO, said on the Q1 2021 conference call that "with us being 50% exposed to the Automotive end market, this is clearly one place where we do understand now how content increases are contributing significantly to this very, very robust demand environment, where we absolutely see no reason why that should ease off or should go away."