Please ensure Javascript is enabled for purposes of website accessibility
Log In Help Join The Motley Fool
Free Article Join Over 1 Million Premium Members And Get More In-Depth Stock Guidance and Research
By Robin Hartill, CFP® - May 2, 2021 at 4:15AM

Is the president's plan enough to save Social Security for future generations?

Social Security wasn't exactly a hot topic during the 2020 presidential race. COVID-19, rampant unemployment, and election theatrics dominated headlines. But for the roughly 1 in 6 Americans who receive benefits, Social Security is very much top of mind.

President Joe Biden's platform included several proposals that could modestly increase Social Security benefits for some recipients. But the real question for taxpayers who won't get benefits for at least a decade is: What will Biden do to ensure the program's solvency?

Social Security recently started paying out more money than it's taking in. The Old-Age and Survivors Insurance (OASI) Trust Fund, which pays retirement and survivors benefits, has enough to continue benefits as promised through 2034. But beyond that, payroll taxes will only fund 76% of its obligations.

Biden hasn't talked a lot about specific plans for Social Security since he was sworn into office in January. But his platform said this about Social Security: "The Biden Plan will put the program on a path to long-term solvency by asking Americans with especially high wages to pay the same taxes on those earnings that middle-class families pay."

But who will pay higher taxes, and will that be enough to protect Social Security for future generations? 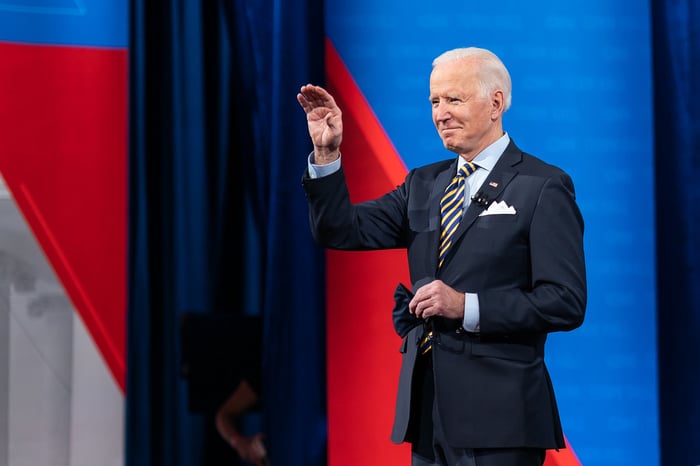 Can a tax hike on high earners save Social Security?

The proposal would create a so-called doughnut hole for Social Security, where earnings between $142,800 and $400,000 wouldn't be taxed. But the doughnut hole would shrink each year as the cap that's currently at $142,800 increases. Keep in mind that capital gains and dividend income aren't subject to Social Security taxes.

Biden's proposal would raise an estimated $740 billion in additional Social Security revenue over 10 years. The Urban Institute estimates that, if enacted by Congress, the plan would be enough to extend solvency by about five years.

The bottom line: Even if Biden gets his wish to make Americans with "especially high wages" pay Social Security taxes at the same rate as lower earners, it still wouldn't be enough to fix the shortfall.

What other Social Security changes has Biden proposed?

Biden hasn't discussed any sweeping changes to Social Security. But his campaign platform includes the following proposals that could modestly increase benefits for some recipients:

Should you expect Social Security to be around for you?

Social Security isn't going to disappear. In the event that nothing changes, Social Security can still fund 76% of its obligations from the money it generates through payroll taxes.

But nothing that Biden is proposing will be a silver bullet. Fixing the shortfall might very well require increasing Social Security taxes for workers with lower salaries or raising the full retirement age for younger people.

Even if you expect to receive 100% of your promised Social Security benefit, it's essential to remember that living solely on those monthly checks is incredibly difficult. COLAs haven't kept up with actual costs of living for most seniors, so it will only get harder. Saving as much as you can in a retirement account while you're still working is vital if you want to be comfortable in your golden years.