Please ensure Javascript is enabled for purposes of website accessibility
Log In Help Join The Motley Fool
Free Article Join Over 1 Million Premium Members And Get More In-Depth Stock Guidance and Research
By Lawrence Nga - May 11, 2021 at 11:18AM

Grab is following in the footsteps of its Chinese peers to become a superapp.

Thanks to the wave of digitalization sweeping over Southeast Asia, which still lags the United States in terms of internet penetration, Sea's growth has been nothing short of monumental. Its revenue surged over sevenfold between 2015 and 2019, fueled by growth in its gaming, e-commerce, food delivery, and digital payments businesses. The rapid rise has also encouraged competitors to get into the business.

Investors looking for the next big thing from Southeast Asia are eyeing Altimeter Growth's (AGCU.U) plan to take Grab Holdings public through what is considered the biggest SPAC deal to date. Grab Holdings, Sea's biggest rival, is backed by Softbank, known for its early investments in Alibaba and Uber Technologies. At a $40 billion valuation, Grab will be the biggest Southeast Asian company to go public in the U.S.

But can it live up to the hype? Here's what you need to know about this deal, which is set to close in July. 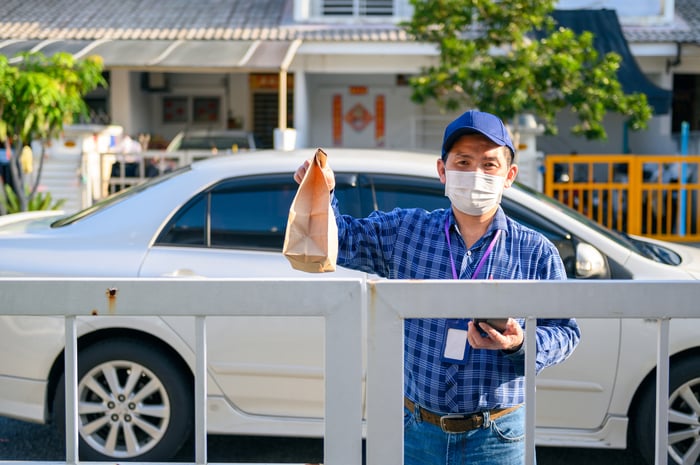 Grab began in 2013 as an Uber-like ridesharing business, matching drivers with passengers. Over the years, it has grown into a super app for food deliveries, e-commerce, and financial services. Grab today is like Uber, Paypal, and Instacart all rolled into one. It operates across 400 cities in eight Southeast Asian countries, matching 25 million monthly users to 5 million drivers and 2 million merchants.

Grab's biggest business is food delivery, which made up $5.5 billion of the company's $12.5 billion in gross merchandise value (GMV) last year. In return for connecting food orders with delivery riders -- and managing the whole shebang, including customer service -- Grab earns a fee of 15% from restaurants. As Grab has been investing heavily to grow this business, the segment is still unprofitable.

On the flipside, Grab's flagship ride-sharing service is already profitable on an EBITDA (earnings before interest, tax, depreciation, and amortization) basis. This segment was hit hard due to COVID-19 lockdowns, with GMV falling 44% to $3.2 billion in 2020. Over the years, Grab has grown its share of the ridesharing market. At the same time, its take rates have improved, rising from 8% in 2018 to a projected 20% this year.

Like China's biggest tech companies, Grab's sprawling business empire includes financial services such as GrabPay, a digital wallet similar to Square's Cash App. Grab also offers a range of financial products including lending, insurance, and wealth management. It's setting up a digital bank in Singapore, which will offer loans, deposits, and other services.

With this extensive range of services, Grab wants to create an "everyday everything app," keeping users coming back throughout the day to book rides, order meals, make an investment, or shop online. As Grab continues to grow its user base, it will naturally attract more merchants and drivers. With a growing user, merchant, and driver base, Grab can roll out even more services. This in turn draws in more users, fueling a virtuous cycle of growth in Grab's user base and services.

Why Grab is well-positioned for growth

Grab has grown rapidly over the past three years. Adjusted revenue quadrupled from $400 million in 2018 to $1.6 billion in 2020, driven by horizontal expansion into new markets. But Grab is just scratching the surface of a massive market opportunity. This is because, in Southeast Asia, industries like food services, transport, and financial transactions are still in the early innings of digital transformation.

Grab estimates that in Southeast Asia, online food delivery, ride-hailing, and digital wallet payments have only captured 11%, 3%, and 17% of their market opportunities, respectively. For comparison's sake, online penetration across these segments in China is 21%, 15%, and 43% respectively. As Southeast Asia catches up to China, secular trends toward digitalization should speed up. As a result, Grab expects its total addressable market to more than triple between 2020 and 2025, rising from $52 billion to $180  billion.

In 2020, Grab had a 72% share of regional GMV for ride hailing, 50% of GMV for online food delivery, and 23% of total payment volume (TPV) for digital wallet payments. This puts it in a pole position to ride expected market growth. Furthermore, Grab's sheer scale will allow it to offer better services at a relatively lower cost.

For example, restaurants will prefer to partner with Grab Food as it is the biggest online food delivery service. As more restaurants join the platform, broadening the selection of food available in the super-app, customers will naturally follow. This creates a snowball effect as the larger customer base attracts more restaurants, and so on. Finally, Grab can tap its extensive network of drivers to deliver orders fast, enhancing the customer experience.

As long as Grab keeps its users and merchants happy, it has a good shot at sustaining (or even growing) its market share.

Still, the path to success will have twists and turns. Competition is Grab's biggest risk and the company is far from the only game in town. In Singapore and Malaysia, Grab's main rival is Sea Limited -- the leading e-commerce player and an up-and-coming digital wallet provider. Sea has also just entered the food delivery space, setting the stage for a turf war with Grab. In Indonesia, Grab faces local players Tokopedia and Facebook-backed Gojek. Gojek and Tokopedia are reportedly planning to merge, forming a stronger rival to Grab.

That being said, Grab is already the leader in its key verticals and stands a good chance of defending its market share. What's more, its addressable market is massive -- big enough for a few players.

Should you buy Grab on its listing day?

By now, it's not hard to see Grab is well-positioned for years of exciting growth. The company expects to grow its GMV and revenue by a compound annual growth rate (CAGR) of 40% and 42%, respectively, over the next three years.

But for investors, Grab's potential comes with a hefty price tag. At a $40 billion valuation, Grab will go public at 25 times its 2020 sales. Uber, for perspective, trades at a third of that multiple.

So investors are better off staying on the sidelines for the moment -- unless they are into high-risk, high-reward stocks and are willing to wait for the company to grow into its valuation.