Please ensure Javascript is enabled for purposes of website accessibility
Log In Help Join The Motley Fool
Free Article Join Over 1 Million Premium Members And Get More In-Depth Stock Guidance and Research
By Anthony Di Pizio - May 12, 2021 at 7:38AM

As the accounting software provider to millions of small businesses, the company faces a depleted addressable market -- at least in the near term.

The pandemic has crippled many small businesses since they've contended with government-mandated closures and reduced foot traffic as consumers try to avoid COVID. Intuit (INTU -2.89%) built a company in large part on serving these small- to mid-sized enterprises, offering accounting software solutions and online tax assistance at affordable prices.

Despite the government providing trillions in stimulus dollars, including specific programs to support businesses through the crisis, several surveys over the last six months suggest small business closures -- many on a permanent basis -- are still elevated. Intuit derives more than half of its revenue from this segment, yet its share price is near all-time highs. Investors should take note as the company may start to feel the effects of these headwinds. 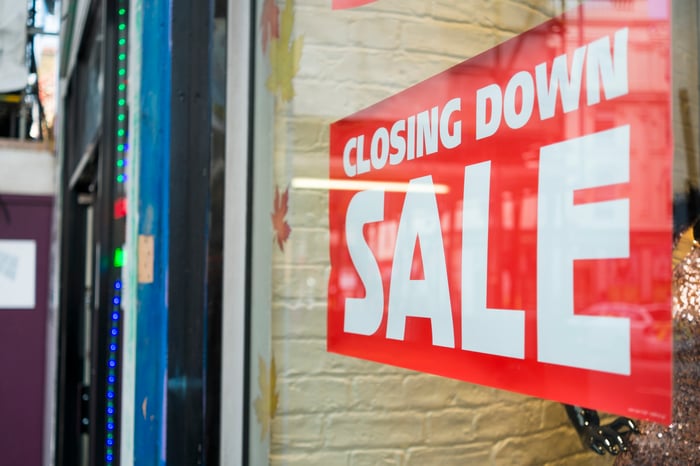 Despite its focus on businesses, Intuit has a sizable consumer offering under the TurboTax brand. It allows individuals to compile and file their own tax returns at the end of the fiscal year, without the need for an accountant -- although that option is available.

The tax season typically begins in January each year and runs through most of April, so the brand's revenue is usually concentrated in the fiscal third quarter. During a year when much of the country was locked down, it's easy to see how do-it-yourself tax returns would grow in popularity, especially for people who normally like to visit their accountant in person but couldn't.

For fiscal 2020, TurboTax reported $2.61 billion in revenue, up 16% from the prior year. The IRS shuffled some dates around for fiscal 2021, opening tax season in February instead of January, so investors will need to wait an extra quarter to see if this growth is sustained in the current tax season. After experiencing the convenience of self-filing, consumers might stick around and continue using the service.

Last month, Facebook conducted a survey of 35,000 small businesses across the world and discovered 22% of those in the U.S. were still closed -- just a single percentage point off the pandemic highs in May 2020. The figure varied widely from state to state and across demographics, but the aggregate number could be evidence that various stimulus efforts, including the Payroll Protection Program, were insufficient.

Of the survey respondents, 27% said they had to reduce their workforce, and almost half of them had to cut at least 50% of their employees -- with no plans to rehire in the short term.

Intuit's Quickbooks accounting software is used by over 5.6 million businesses, and the subscription payment structure is really important in context with the above data. In addition to the regular accounting software cost, the company offers a payroll add-on for businesses that have employees.

The payroll add-on provides the business with a suite of tools, including paycheck and tax calculators, a workforce portal, and payroll reports.

When selecting the $45 monthly option, the business owner needs to pay an additional $4 a month, per employee. Larger businesses that need more features pay $10 a month, per employee. Aside from the sizable percentage of U.S. businesses that are still closed, investors should consider the magnitude of workforce reductions among those that are still open and the pressure it will put on Intuit's results.

The Facebook survey is just one source of information, but it highlights the same issue as a report from Yelp back in Sept. 2020. The company noted that of approximately 163,000 U.S. small businesses on its platform that were closed at the time, almost 100,000 of them had become permanent closures.

So far, Intuit hasn't seen a contraction in its revenue streams grouped as "small business and self employed," though growth tapered noticeably on a year-over-year basis in the most recent quarter.

Businesses that closed during the fiscal year may keep their accounting software current until the end of tax season to assist with their reporting. In other words, Intuit may not see the adverse effects of extensive small business closures until at least a few quarters from now, or maybe even a year.

This could be partially offset by an uptick in individual usage of TurboTax, but ultimately, the small business segment accounts for over half of the company's revenue, so that would be a tall order.

Intuit earned $7.86 per share in fiscal 2020, valuing the stock at an earnings multiple of 50 times. Management is guiding for fiscal 2021 adjusted earnings of $5.40 per share (at the midpoint), which would bring the current multiple down to about 48 -- assuming the company hits that target. Given some of the potential struggles ahead, investors should opt for caution at such valuations.