Please ensure Javascript is enabled for purposes of website accessibility
Log In Help Join The Motley Fool
Free Article Join Over 1 Million Premium Members And Get More In-Depth Stock Guidance and Research
By Prosper Junior Bakiny – May 13, 2021 at 10:10AM

Over the past year, several biotechs involved in the hunt for COVID-19 vaccines have been grabbing scores of headlines. And while some of these companies have managed to live up to the hype (in terms of stock performance), others have, thus far, been a flop.

We can safely put Inovio Pharmaceuticals (INO 2.68%) in the "flop" category, as the company's shares have thoroughly underperformed over the past 12 months, despite its stratospheric rise in the first half of 2020.

Some might argue that this poor showing represents a buying opportunity, but in my view, Inovio's stock remains unattractive even at current levels. Read on to find out why. 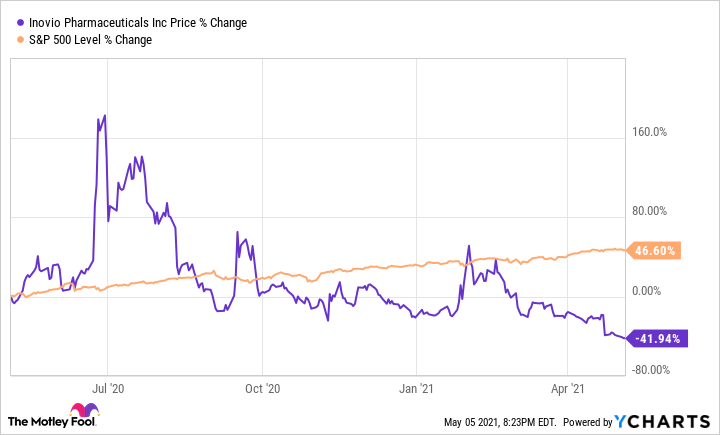 Where did it go wrong?

Inovio threw its hat in the coronavirus vaccine ring as early as January 2020. The company claimed to have designed its vaccine, INO-4800, in a mere three hours after Chinese researchers publicly released the genetic sequence of the SARS-CoV-2 virus that causes the disease.

Inovio kicked off phase 1 clinical trials for its candidate in April of 2020 -- before almost any of its competitors -- and it secured funding from several third parties to help in its efforts to see this project to completion. All of this sounds great, so what exactly went wrong for Inovio?

Two of the most important missteps in the company's COVID-19 vaccine hunt were as follows. First, the U.S. Food and Drug Administration (FDA) had serious questions regarding Inovio's Cellectra 2000, a proprietary device it uses to administer INO-4800.

In September, the regulatory agency issued a partial clinical hold for Inovio's planned phase 2/3 clinical study for INO-4800. And while the FDA eventually gave the company the green light to start the phase 2 portion of the study, the phase 3 part remains on partial clinical hold until Inovio can adequately address the agency's concerns. 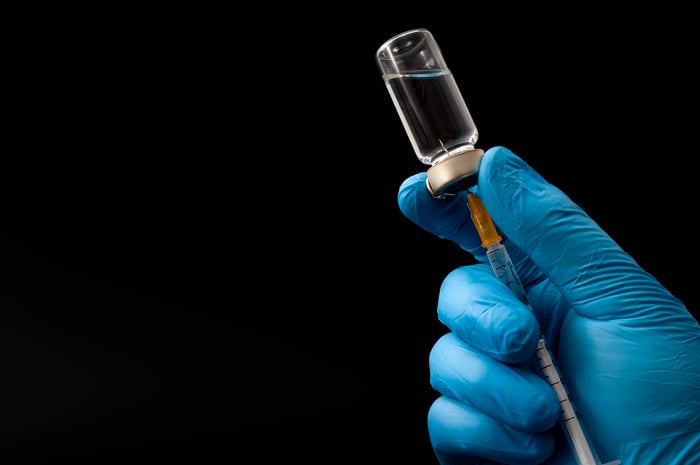 Second, the company recently announced that the U.S. Department of Defense (DoD) -- which had committed to pay for the phase 3 portion of its phase 2/3 study for INO-4800 -- decided to discontinue funding for this trial. Putting all of this together, Inovio's coronavirus-related efforts are in a bit of trouble. No one knows when (or if) the FDA will allow the company to start its phase 3 study.

And even if the biotech gets the all-clear from regulators, it will have to conjure up the capital necessary to support this trial. The vaccine maker is now looking to conduct its phase 3 study outside the U.S. Inovio could also choose to issue new shares to raise the money it needs, something it already did earlier this year.

However, that would lead to more dilution, and would likely sink its stock price. While Inovio is busy figuring out its path forward, some companies have already delivered millions of doses of their vaccines (Moderna, Pfizer, and Johnson & Johnson). Others look set to join the party sooner than Inovio (Novavax, and perhaps Ocugen).

At this point, betting on Inovio to make a serious dent in the coronavirus vaccine market is little more than speculation.

The good news is that Inovio has many other clinical programs it is currently working on. In fact, the company's pipeline looks ambitious: Inovio is trying to develop vaccines or treatments for several forms of cancer, Ebola, and even HIV.

While most of these candidates are still in phase 1 or phase 2 testing, Inovio's VGX-3100 is currently being tested in a phase 3 study. VGX-3100 is a potential treatment for a human papillomavirus (HPV)-associated precancerous condition called cervical dysplasia.

The biotech recently announced positive efficacy results from a phase 2 clinical trial for this therapy. The market opportunity for VGX-3100 could be relatively attractive, too. The annual incidence of cervical dysplasia is 195,000 people in the United States and 233,000 people in Europe, and there are currently no FDA-approved treatments for it.

Why Inovio isn't worth the risk

Inovio's coronavirus-related efforts look very unlikely to bear fruit anytime soon. By the time the company's vaccine hits the market -- if it goes that far at all -- others will have already established a strong presence in this space. That doesn't mean Inovio won't generate any sales from INO-4800 somewhere down the line.

But the way things look, it is impossible to justify putting your hard-earned money in Inovio rather than other biotechs that are far ahead in the coronavirus vaccine race. And while VGX-3100 seems promising, it will take at least another year (an optimistic prediction) to earn FDA approval.

With all that in mind, Inovio's stock looks far too risky. There are plenty of much better biotech stocks to consider investing in.