Please ensure Javascript is enabled for purposes of website accessibility
Log In Help Join The Motley Fool
Free Article Join Over 1 Million Premium Members And Get More In-Depth Stock Guidance and Research
By Nicholas Rossolillo - May 14, 2021 at 12:27PM

This lending technology specialist is ramping up its sales in a big way this year.

Upstart (UPST -5.34%) has been a stock market hit since its IPO in December. Shares of the company, which operates an artificial-intelligence-powered consumer-lending platform, have doubled since then -- even after it took part in the recent sell-off of high-growth tech stocks that left it trading more than 50% below its all-time high.

But the stock has begun to rally following its first-quarter 2021 financial update released earlier this week. This fintech firm is the real deal and has a long runway for growth ahead of it. Here are three reasons why. 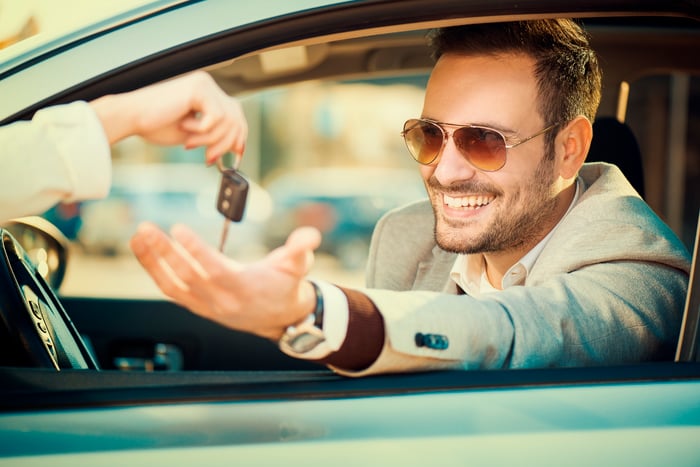 1. Upstart is a platform for better lending practices

Upstart itself is a lender, but 96% of its revenue came from the fees that banks and other lending institutions pay to use its AI-based platform. Upstart's AI uses hundreds of data points to construct a more accurate picture of a borrower's true credit risk rather than relying on traditional credit metrics like FICO scores. The result is lower interest rates and higher approval rates for consumers. And because the process is automated, it frees up resources, allowing banks to lend more to customers while also improving their credit profiles by helping them avoid making potentially troublesome loans.

Numerous banks have already signed up to make use of Upstart. As a result, its revenue rose 90% year over year in Q1 to $121 million. Bank partners used its platform to originate $1.73 billion in personal and auto loans in the quarter, a 102% increase. And economies of scale are clearly at work here too. Adjusted EBITDA for the quarter was $21 million, up from a negligible amount a year ago.

2. Upstart's AI is only getting better

Machine-learning systems are designed to improve over time, because the more data they're fed, the better they get at assessing new information. For Upstart's AI platform, one key metric is its conversion rate -- how many loan applications get approved as a percentage of total inquiries. In Q1, the conversion rate was 22%, up from 14.1% a year prior.

As the AI-based lending system handles more applications, it's also getting more financially efficient. The contribution margin (which measures the profitability of a product line) was 48%, also up significantly from 38% last year. And this is a win-win for bank partners too. Of the loans Upstart helped approve, 71% of them were fully automated and instantly approved. That reduces overhead costs for bank teams, which are still trying to navigate the new digital and remote-work protocols that were put in place due to the pandemic. Upstart offers a tool that can help them adapt.

3. Management made a huge upgrade to its 2021 outlook

Upstart was already forecasting triple-digit percentage revenue growth for 2021, but along with its Q1 report, it provided a big upgrade to its previous outlook. At the time of its fourth-quarter 2020 earnings update, the company forecast revenue for this year of about $500 million, which would amount to growth of about 115%. Now, it's predicting revenue will be about $600 million in 2021. That's right, an additional $100 million in expected revenue. If that proves accurate, the company will deliver top-line growth of about 158%.

The addition of auto loans to its list of proficiencies (via its recent acquisition of Prodigy Software) was the reason for that improved outlook, and the company is eying further expansions. The platform can currently handle unsecured personal loans and auto loans, but Upstart management has noted that adding mortgages and credit card originations would increase the total value of its addressable loans to $3.4 trillion a year in the U.S. alone. Clearly, there's plenty of room for this AI technologist to grow its footprint.

After the Q1 update, Upstart stock trades for 12 times expected full-year 2021 sales. Given its rapid expansion and improving profit profile, this fintech stock is worth keeping an eye on for the long haul.