Please ensure Javascript is enabled for purposes of website accessibility
Log In Help Join The Motley Fool
Free Article Join Over 1 Million Premium Members And Get More In-Depth Stock Guidance and Research
By Adam Levy - May 18, 2021 at 5:30AM

The company had built a big lead, but the pandemic strengthened the competition.

As we entered 2020, Walmart (WMT 1.85%) had built a substantial lead in online grocery service, offering order pickup at 3,200 locations in the U.S. and delivery from 1,600 of those stores. When the pandemic hit and consumers restricted their in-store shopping, Walmart was well positioned to win. 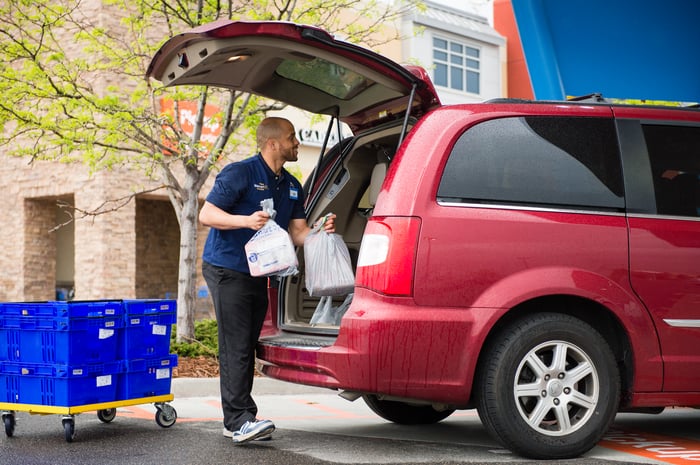 The drop in Walmart's market share of online grocery should be especially concerning for Walmart investors.

Online grocery sales in the U.S. grew 54% in 2020, according to estimates from eMarketer. Based on that number and Walmart's market share estimates, the retailer's online grocery sales grew about one-third slower than the overall market. On an absolute basis, it only contributed $4.5 billion to $5 billion of sales growth, with total sales nearing $30 billion last year.

But as online grocery sales growth falls back down to normal levels this year and next, Walmart may have trouble increasing sales at all. That's especially true considering Target only introduced curbside pickup for groceries last summer, and rolled it out to all of its stores by late fall. Likewise, Amazon's online grocery selection and availability is still expanding after a big push last summer.

As a result, online grocery may go from a driver of Walmart's e-commerce business to a drag on sales and profit growth. That's especially true considering Walmart viewed online grocery as a gateway to convert customers to general Walmart.com shoppers. But that's an area where it's struggling to keep pace with the rest of the market as well. The memo also showed Amazon and Target cutting into Walmart's general merchandise market share during the pandemic.

Walmart revamped its grocery delivery subscription service and launched it as Walmart+ last September. The service saw some early success. Following its running start, it counted as many as 8 million subscribers by February, according to data from Consumer Intelligence Research Partners. But it's struggling to retain subscribers and convert trial members into paid members, according to the memo.

Walmart+ is a key initiative to increase customer loyalty, especially considering the majority of Walmart's top spenders are Amazon Prime members. In fact, as Walmart struggles to plug its subscription leakage, Amazon just saw its best year of Prime subscriber growth ever. It's added roughly 50 million Prime subscribers around the world since the start of the pandemic.

What does the future hold for Walmart?

Walmart entered 2020 in a strong position to cater to the growing number of online grocery orders, but it quickly found itself struggling to service the sudden spike in orders and keep items in stock for both in-store and online customers in the early days of the pandemic. It was difficult to book a pickup or delivery window, which led customers to seek alternatives.

It entered 2021 with nearly twice as many stores offering same-day grocery delivery, and nearly all of its grocery locations offering curbside pickup. Still, the company isn't quite keeping up with the competition.

The initiatives at Instacart, Amazon, and Target during the pandemic give customers more options. Instacart now delivers general merchandise from some retailers, Amazon offers both curbside pickup and delivery from Whole Foods, and Target now offers curbside pickup or straightforward same-day delivery options with Shipt from its own website.

With its market share of online grocery already falling to 31%, it may not be long before Walmart's share of online grocery falls below its share of the overall U.S. grocery market, which stands around 26%. As more grocery sales move online, that could be a real pain point for sales growth for Walmart, considering the category accounts for the majority of the retailer's revenue.