Please ensure Javascript is enabled for purposes of website accessibility
Log In Help Join The Motley Fool
Free Article Join Over 1 Million Premium Members And Get More In-Depth Stock Guidance and Research
By Harsh Chauhan - May 26, 2021 at 7:30AM

These 5G stocks are trading at attractive valuations amid the tech stock pullback, but they could explode in the long run.

The S&P 500 has delivered double-digit percentage gains so far in 2021, but several tech stocks have been hit by volatility as investors have panicked at the sight of rising inflation and rich valuations and are now trading at correction-level lows. The tech-heavy NASDAQ-100 Technology Sector has underperformed the S&P 500 as some investors cashed in on the terrific gains they scored last year.

But the tech sell-off has also created a great opportunity for investors to pick up discounted shares in some fast-growing companies that take advantage of hot technology trends. Palo Alto Networks (PANW -0.06%) and Skyworks Solutions (SWKS -0.47%) are two stocks investors should look at.

These two stocks are not only cheap at the moment, but they also stand to win big from the arrival of 5G (fifth-generation) wireless networks -- a market that's still in its early phases of growth. Let's see how. 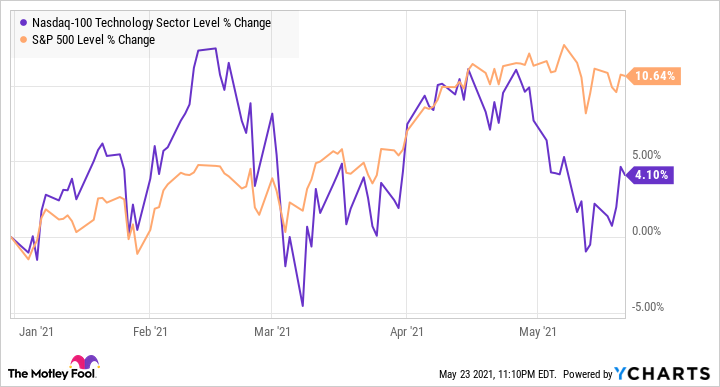 The growing deployment of 5G networks across the globe is throwing up new cybersecurity challenges. That's because 5G is driving massive growth in the number of connected devices across several verticals, including the Internet of Things (IoT), connected cars, factory automation, and smartphones, among others.

Telecom operators will need to secure local small-cell sites that are key to the deployment of 5G, while also dealing with the challenge of software-defined networks that decentralize data from one location to many. In simpler words, 5G deployment is expected to create a bigger surface area for bad actors to attack. As a result, organizations and governments will have to shore up their cybersecurity capacities to keep their systems up and running in a secure manner in this new era of high-speed networking technology. 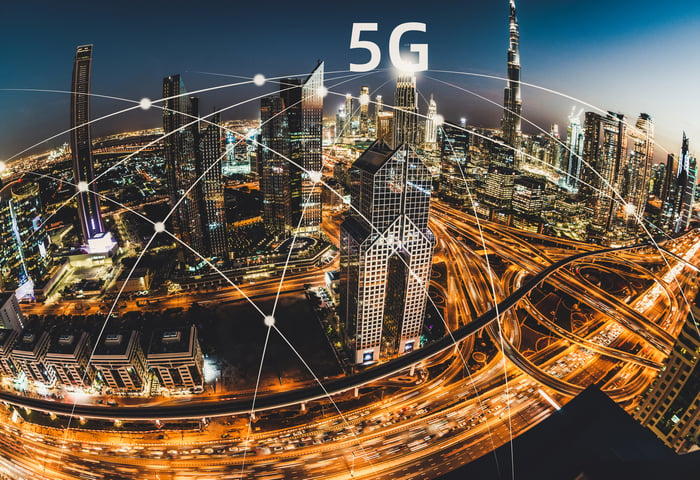 Not surprisingly, spending on 5G security is expected to grow at a solid 44% annually through 2026 to $5.2 billion, as per a third-party estimate. That would be a huge step up from the $580 million spent last year.

Palo Alto Networks is a great way to take advantage of this surge in 5G-related cybersecurity spending. The cybersecurity specialist launched what it calls the "industry's first 5G-native security offering" in November last year. This solution allows enterprises and service providers to secure the core of their 5G networks, and protect edge networks and applications that are closer to the source of incoming data rather than the centralized hub. An autonomous car is an example of edge computing, as data generated by the vehicle must be processed quickly to help it make fast decisions on the road.

Palo Alto Networks is already growing at an impressive pace thanks to the cloud security market, and the addition of 5G into the mix could give it a nice shot in the arm. Analysts expect Palo Alto to clock strong double-digit revenue growth over the next two fiscal years, while the long-term bottom-line growth forecast of over 60% is also outstanding.

Throw in the fact that Palo Alto is trading at 8.7 times sales and 52 times forward earnings, compared to the 2020 average multiples of 9.6 and 65, respectively, and the stock looks enticing right now. A stock market crash could make it even more attractive, which is why investors looking to add a 5G stock to their portfolio should keep Palo Alto within their sights.

Skyworks Solutions has been in fine form from a financial perspective, but the Apple (AAPL -0.29%) supplier has fallen out of favor on the stock market. Investors were quick to press the sell button even though Skyworks delivered an outstanding Q2 report and guidance at the end of April, and the sentiment hasn't changed since.

But there are a few simple reasons why investors looking to take advantage of the 5G market should be buying Skyworks' crash -- the company's terrific growth being one.

The Apple supplier's revenue was up 53% year over year in Q2 to a record $1.17 billion, and non-GAAP earnings shot up 72% year over year to $2.37 per share during the quarter. Soaring sales of 5G smartphones played a key role in this terrific growth, as Skyworks gets 67% of its revenue from selling chips to smartphone OEMs (original equipment manufacturers).

Apple does most of the heavy lifting for Skyworks' massive growth. The iPhone maker accounts for 56% of the chipmaker's revenue thanks to its usage of multiple radio-frequency chips in the latest iPhone 12 lineup, whose success has rubbed off positively on Skyworks. The iPhone 12 is dominating the 5G smartphone sales charts, and Apple is reportedly on its way to break its existing annual sales record by shipping an estimated 240 million-plus iPhones this year. It could build upon that success next year, as production of this year's iPhone models is expected to be higher than that of the iPhone 12.

Additionally, noted Apple analyst Ming-Chi Kuo predicts that Apple could launch a 5G-enabled version of the entry-level iPhone SE in early 2022. Such a move could give Apple access to a wider 5G smartphone audience, and give Skyworks' prospects a nice shot in the arm. Moreover, investors shouldn't forget that the 5G smartphone market is set to explode in the coming years. Skyworks is supplying its chips to the top companies in this space, while also finding terrific traction in the Internet of Things markets.

These tailwinds indicate why analysts expect Skyworks' earnings to clock an annual growth rate in the high teens over the long run. The company is winning big from 5G smartphones and has other catalysts in the bag as well that could help it exceed expectations in the future. All of this makes Skyworks one of the top growth stocks investors should be buying right now -- or in a market crash -- as it is trading at just 15 times forward earnings.