Please ensure Javascript is enabled for purposes of website accessibility
Log In Help Join The Motley Fool
Free Article Join Over 1 Million Premium Members And Get More In-Depth Stock Guidance and Research
By Harsh Chauhan - Mar 9, 2021 at 8:45AM

The smartphone giant is turning on the heat, but its stock has actually gotten cheaper.

It is surprising to see that Apple (AAPL -1.92%) shares have taken a beating in 2021 despite the terrific sales momentum of the iPhone 12, which helped the smartphone giant recently deliver a record quarter.

However, Apple's dip gives investors an opportunity to buy a stock that could deliver long-term upside, driven by multi-year growth on the back of the 5G smartphone revolution. Let's take a closer look at the reasons why buying Apple stock right now looks like a great idea. 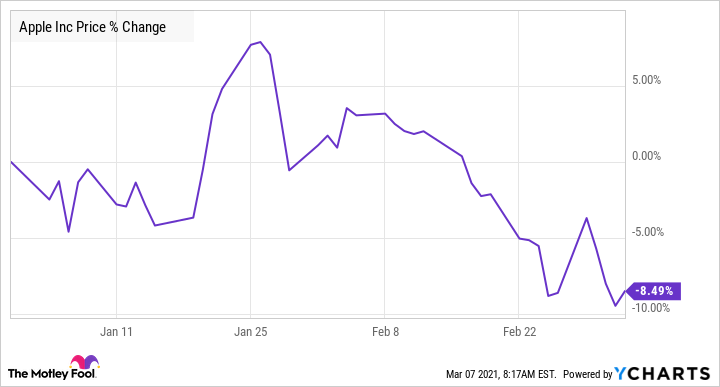 Apple is just getting started in 5G smartphones

The success of Apple's 5G iPhones catapulted the company to the top of the smartphone sales chart last quarter. The company should be able to build upon that success, as iPhone 12 demand continues to outpace supply. DigiTimes predicts that Apple could ship over 60 million iPhones in the first quarter of 2021, and IDC estimates that Apple shipped 36.7 million units in the first quarter of 2020, indicating that the company is on track to deliver yet another blockbuster quarter.

More importantly, Apple's sales momentum could last beyond just one quarter. Wall Street chatter suggests that Apple could place an initial order for 100 million units of its 2021 iPhone model, up from the 80 million iPhone 12 orders it placed last year. AppleInsider reports that JPMorgan Chase supply chain analyst William Yang holds a similar opinion. Yang believes that as many as 90 million units of the 2021 iPhone may be built in the second half of the year, compared to an estimated 76 million iPhone 12 builds last year.

A substantial jump in the initial builds of the rumored iPhone 13 wouldn't be surprising either, as 5G smartphone shipments are expected to more than double from 280 million units last year to 600 million units in 2021, according to DigiTimes. Apple is expected to corner 35% of the global 5G smartphone market in 2021 as per a third-party estimate, thanks to a huge installed base of users waiting to upgrade. All of this indicates that this year's iPhone lineup could exceed the iPhone 12's sales.

What's more, noted Apple analyst Ming-Chi Kuo predicts that the company could come out with a 5G iPhone SE smartphone in the first half of 2022. The iPhone SE is Apple's entry-level device, and a 5G-enabled version could help the company boost sales in price-sensitive markets like India, where the switch to 5G networks is expected to begin early next year.

Additionally, it is worth noting that 5G smartphone penetration is expected to increase to 37% of the overall market in 2021. So the new-generation wireless devices will still have a lot of room for growth beyond this year, which could pave the way for multi-year growth in Apple's shipments. The smartphone giant's shipments are expected to rise 13% in 2021, according to JPMorgan analysts, but it could go one step better next year, as the supply chain gossip indicates.

A great chance to buy

Apple's dip has made the stock cheaper than last year. It is trading at just under 33 times trailing earnings, compared to 2020's average price-to-earnings (P/E) multiple of more than 40. The current price-to-sales ratio of 7.1 is also lower than last year's average of nearly 8.5.

However, Apple is expected to deliver a massive improvement in its fiscal 2021 financial performance. Analysts expect over 21% revenue growth from Apple this fiscal year, along with a 35% increase in earnings per share. The company's revenue was up just 5.5% in fiscal 2020. So investors can buy Apple at a relatively cheap valuation compared to last year and see the company deliver a much-improved financial performance. That's why now would be a good time to buy this growth stock, as it could regain its market mojo sooner rather than later.