Please ensure Javascript is enabled for purposes of website accessibility
Log In Help Join The Motley Fool
Free Article Join Over 1 Million Premium Members And Get More In-Depth Stock Guidance and Research
By Rich Smith - May 31, 2021 at 6:07AM

Americans are going back to the moon. But who will build their cars?

Weighing in at an $87 billion market capitalization, and with $9 billion in annual profit, General Motors (GM 0.83%) is a 10 P/E stock. GM is also an industrial giant, and its chances of becoming popular enough to send its stock price "to the moon" -- like a meme stock -- aren't great.

But sending GM's products to the moon is another story. 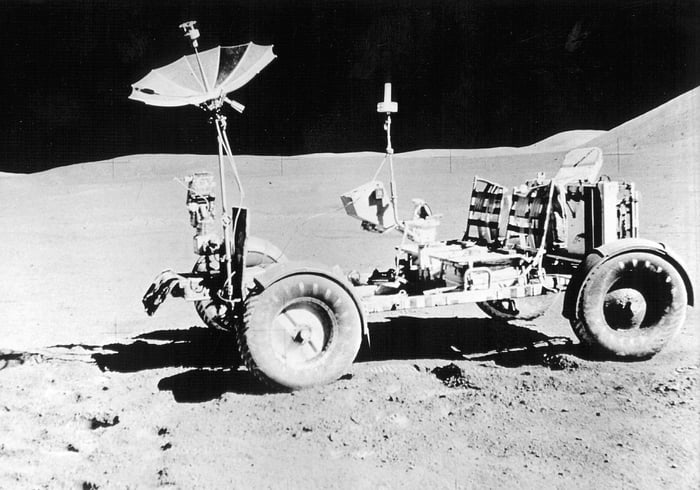 Fifty years ago, General Motors teamed up with Boeing (BA 0.89%) to build the battery-powered, four-wheeled Lunar Roving Vehicle (LRV) that NASA astronauts used to motor around the moon on Apollo missions 15, 16, and 17. Fifty years later, GM is going to get another chance to build a moon buggy -- this time with Lockheed Martin (LMT -0.51%).

Last week, as you may have heard, GM and Lockheed announced they are teaming up to design a Lunar Terrain Vehicle (LTV) for Project Artemis, the NASA program that will send American astronauts back to the moon for the first time in five decades. Utilizing a modern, battery-powered LTV, astronauts will be able "to explore the lunar surface farther than ever before," promised the companies -- "significantly farther" than the 4.7 miles total that the LRV ever traveled. What's more, thanks to advances in remote operation and situational awareness that GM has been developing for its electric cars here on Earth, the LTV will feature "autonomous, self-driving systems" that should permit the LTV to be delivered and begin doing work on the moon even before the astronauts get there.

Now before you get too excited, GM investors, be aware that this contract is not in the bag yet. Far from it, in fact. NASA hasn't yet even begun accepting bids to build the lunar rover, much less picked General Motors and Lockheed Martin as the winners.

We don't know precisely when bids will be invited, or when a contract will be awarded. Presumably the contract must be awarded soon if NASA is to meet its self-imposed deadline of returning astronauts to Luna by 2024 -- but no one has said that officially yet.

Still, the fact that these two companies have thrown their hats in the ring already places them first in line to win a contract, and GM's position as the incumbent (read "only") builder of moon buggies is certainly a mark in this team's favor.

What's more, if GM and Lockheed win this contract, we could be talking about more than just one single moon buggy getting built. As the companies pointed out in their press release, "the LTV is the first of many types of surface mobility vehicles needed for NASA's Artemis program." Under Project Artemis, you see, the plan is for NASA to first establish an Artemis Base Camp on the lunar surface, and then begin building infrastructure to support exploration of the moon over an extended period of time -- and if that's the case, there may be a need for not just moon buggies, but for moon dump trucks, moon fuel trucks...in short, everything that you might need to build a brand new "infrastructure" on another celestial body.

What it most definitely will do, though, is hand General Motors and Lockheed Martin a big PR win. And you can expect GM to exploit that to the fullest in its TV advertising, as the race to win market share in electric and self-driving cars on Earth starts up in earnest.

Again, that's if they win the contract.