Please ensure Javascript is enabled for purposes of website accessibility
Log In Help Join The Motley Fool
Free Article Join Over 1 Million Premium Members And Get More In-Depth Stock Guidance and Research
By Rich Smith - Jun 1, 2021 at 7:33AM

Arianespace promised a reusable rocket in 13 years -- but it's starting out four years late.

Space launch company SpaceX launched its first rocket in March 2006 -- an expendable "Falcon 1" rocket that failed to even reach Earth orbit. It only took the company six years, though, to both fix its design and begin sending rockets to orbit with regularity, and decide that the real future of rockets -- and the key to making rocket launch affordable -- was in making them reusable.

In September 2012, SpaceX inaugurated its reusable rocket program with a test launch of the "Grasshopper", the vehicle that would eventually evolve into the Falcon 9, Falcon Heavy, and Starship programs.

Throughout all that time, SpaceX's primary competitors in space launch, America's United Launch Alliance (a 50-50 joint venture of Boeing and Lockheed Martin) and Europe's Arianespace (a 50-50 JV of Airbus (EADSY -0.07%) and Safran (SAFRY -0.28%)), have continued flying expendable rockets that are each discarded after one use. But nearly a decade after Grasshopper made its first hop, Ariane, at least, has decided that it's time to develop a reusable rocket of its own. 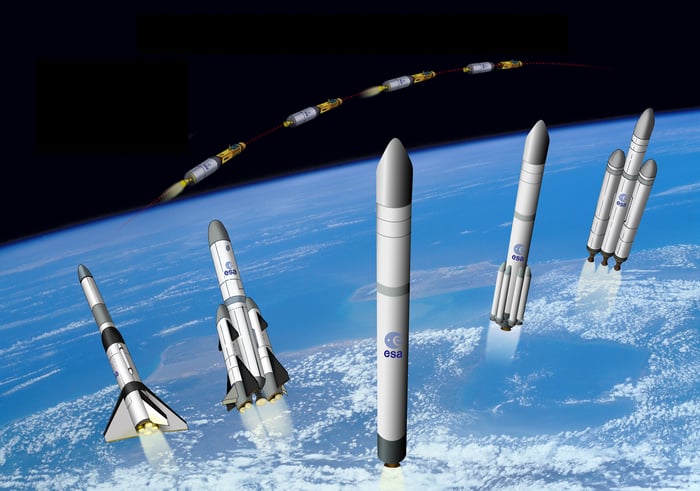 To make this possible, Ariane has announced plans to develop a reusable "Prometheus" engine to power its reusable rocket. The company first sketched out the Prometheus project four years ago, estimating that it would cost $91 million to develop, be ready for testing by 2020, and be ready to launch by 2030.

But progress has been slow.

In 2019 France's independent state auditor, the Cour des comptes (Cdc), blasted Arianespace for having "lost global leadership in the commercial market to the American company SpaceX," and warned that the company might "not [be] competitive over the long term" if it didn't develop a reusable rocket of its own. Unfortunately, the coronavirus then shut down the global economy, costing Ariane more than a year of progress toward its goal.

Now Ariane is scrambling to play catch-up. Last week the European Space Agency finally announced it will provide nearly $165 million to Ariane to fund the development of the Prometheus "ultra-low cost reusable rocket engine demonstrator." This was in addition to the roughly $40 million ESA awarded Ariane in December to develop a "Themis Initial Phase" prototype reusable rocket stage.

The money will be used to fund static fire tests on "two existing full-scale Prometheus engine demonstrators," leading to refinements of the design and the construction of four more demonstrator engines. ESA says it plans to test-fly a Prometheus-powered Themis in 2023, and suggested that the Prometheus engines might be used on Ariane's upcoming Ariane 6 rocket design "as early as 2025."

But will Ariane's reach exceed its grasp? Reporting on the story last week, Inverse.com predicted the Prometheus engine will turn Ariane into "a huge competitor" to SpaceX. I have my doubts about that -- at least in the near term.

Although Ariane hasn't been completely inactive since announcing its Prometheus project in 2017, the construction of just two early stage prototype engines in four years won't set any records for development speed. Ariane seems to have largely squandered the past four years. If its 2017 goal was to have a working reusable rocket ready by 2030, then the chances of hitting that target after getting off to a four-year-late start have probably gotten worse, not better.

Could Ariane surprise us? Sure. Its ambitious promise to test fly Themis as soon as two years from now, and its suggestion that Prometheus might be installed in an Ariane 6 just two years after that -- moving the goalposts forward, not backward -- suggest that Ariane has finally committed to this project, and will try to accelerate its development.

All I'm saying is that by starting off nearly half a decade late, Ariane has made hitting its original goal harder -- let alone hitting these two new, advanced goals. It's given SpaceX time to move beyond Falcon 9 and its reusable first stage, beyond Falcon Heavy and its increased payload capacity, and begin work on its next generation Starship, which will be completely reusable and vastly more capable than Falcon 9.

Ariane is stuck playing catch-up, and in a race with Elon Musk, that's not where you want to be.