Please ensure Javascript is enabled for purposes of website accessibility
Log In Help Join The Motley Fool
Free Article Join Over 1 Million Premium Members And Get More In-Depth Stock Guidance and Research
By Adam Levine-Weinberg - Jun 6, 2021 at 9:05AM

United Airlines just announced a deal to buy supersonic jets to serve key international markets. But can it make money flying faster than the speed of sound?

United Airlines (UAL 2.19%) made a big splash on Thursday. The global airline giant announced plans to become the launch operator for Boom Supersonic's first commercial jet. United will offer its substantial technical expertise to help the start-up bring its Boom Overture supersonic aircraft to market by 2029.

Alas, there are very good reasons why there are no supersonic commercial jets flying today, more than half a century after the Concorde's first flight. United Airlines will struggle to find a profitable niche for supersonic flights on the Boom Overture -- assuming the product gets built in the first place.

United Airlines says that it has signed a commercial agreement with Boom to buy 15 Boom Overture supersonic jets, with options for another 35. The aircraft purchases are conditional on the Overture meeting "United's demanding safety, operating and sustainability requirements," not to mention achieving FAA certification.

It will take a long time for Boom to reach those milestones. So far, it has built a 71-foot-long demonstrator aircraft that has yet to take flight. The start-up hopes to finalize the Boom Overture's design later this year, begin building the production line in 2022, roll out the first completed Overture jet in 2025, and launch commercial service by 2029. (Even that timeline could prove overly ambitious.) 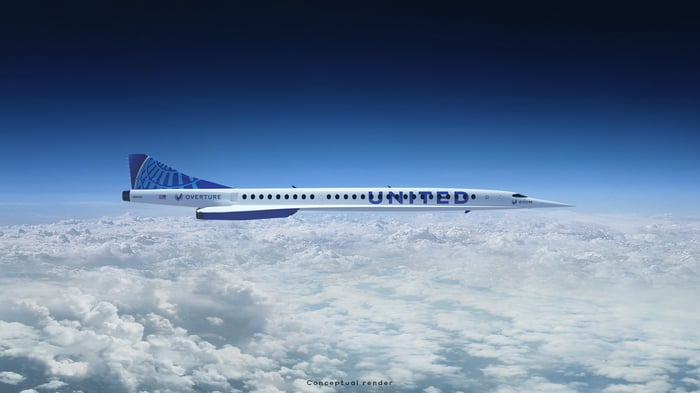 The Boom Overture is designed to fly at Mach 1.7: twice the speed of today's long-haul jets. That will allow it to carry up to 88 passengers between New York and London in as little as 3.5 hours. Furthermore, the Overture is designed to run on sustainable aviation fuel -- made from things like used cooking oil -- enabling it to boast net-zero carbon emissions.

As I noted last year, supersonic jets face a huge uphill battle to become commercially viable. The Boom Overture is no exception.

First, commercial jets generally aren't permitted to fly at supersonic speeds over land, due to the sonic booms they create. Realistically, that means supersonic jets can only fly long overwater routes.

Second, supersonic jets burn significantly more fuel than comparable subsonic jets. That limits their range. Sure enough, Boom advertises a 4,250 nautical mile range for the Overture. For comparison, most modern wide-body jets feature at least 7,000 nautical miles of range. This range limitation means that the Overture (as currently designed) can't fly nonstop to anywhere in Asia from United's hub in San Francisco. The need to stop to refuel along the way chips away at its speed advantage and is inconvenient for customers.

Third, supersonic speeds offer limited utility for travelers heading from New York (or elsewhere in the Northeast) to Europe. Full-service airlines like United offer luxurious business-class seats that convert into flat beds for long-haul flights. Business travelers on eastbound flights to Europe can leave in the evening, arrive in the early morning, and get a decent amount of sleep during the flight. There isn't enough time to sleep on a supersonic flight, though. Ironically, customers flying on the Boom Overture would need to leave much earlier in the day, so they could arrive in the evening and sleep at their hotel. 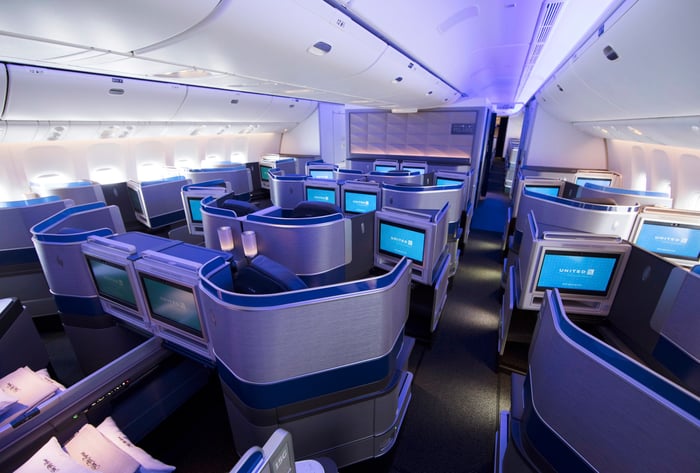 Supersonic travel is much more useful heading from Europe back to the Northeast: You can "arrive before you leave" -- in local time, anyway. But United Airlines won't be able to make money flying the Overture unless customers are willing to pay extremely high fares in each direction.

To their credit, United Airlines executives acknowledge that they are taking a calculated risk with Boom Supersonic. If it looks like Boom won't be able to deliver the product it has promised, United will walk away with a fairly modest financial impact.

Viewed from this perspective, the limited downside may make United's deal with Boom worthwhile. Still, investors should recognize the low odds of success.

United Airlines would need to command a big premium over subsonic business class fares to make money flying the Boom Overture. Given the Overture's inability to fly nonstop from San Francisco to Asia and the limited utility of supersonic speeds when flying to Europe, there isn't much of a business case for buying this supersonic jet.