Growing the Navy to 355 ships will require some more helping hands.

Huntington Ingalls Industries (HII 0.68%) isn't America's biggest military shipbuilder, but it seems to want to be.

With $9.4 billion in revenue in 2020, it was just edged out last year by the Marine Systems division of General Dynamics (GD 1.25%) -- with revenue of $10 billion. But on Wednesday, Huntington laid out a growth plan that includes hiring approximately 3,000 full-time shipbuilders, including shipfitters, electricians, pipefitters, pipe welders, and structural welders to staff its growing Ingalls Shipbuilding division. 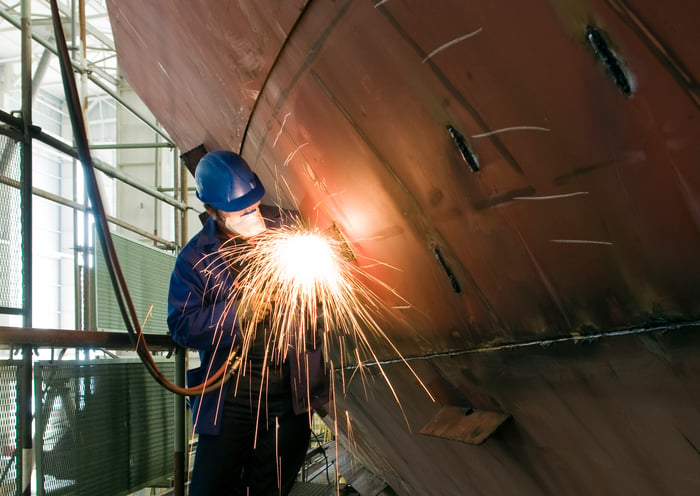 Such an increase would amount to more than a 7% expansion in the company's workforce.

"We are steadily adding new team members to our growing workforce," said Ingalls Shipbuilding President Kari Wilkinson, offering incentives like competitive pay and health insurance, and a healthcare clinic for shipbuilders and their families. It will also provide free training for those who lack shipbuilding experience.

As the Pentagon moves forward with plans to grow the Navy battle fleet to 355 ships, analysts see Huntington Ingalls as a prime beneficiary. According to S&P Global Market Intelligence estimates, the company's revenue is set to grow 14% through 2025, to $10.6 billion.

Profits could grow even faster, nearly doubling from the $13.03 per share forecast for this year, to as high as $23.65 by 2025. And free cash flow could more than triple from this year's estimated $255 million to nearly $800 million four years from now.

And with such bright financial prospects, growing the workforce by 7% should be easily affordable for Huntington Ingalls.