Please ensure Javascript is enabled for purposes of website accessibility
Log In Help Join The Motley Fool
Free Article Join Over 1 Million Premium Members And Get More In-Depth Stock Guidance and Research
By Rich Duprey - Jun 9, 2021 at 5:14AM

The meme stock rally is a perfect time to teach the right way to think about a company.

We know the GameStop (GME -3.80%) story is not going to end well. Not that the video game retailer is going to go bankrupt or anything, but its stock's moon shot -- up more than 15-fold from its January lows at Monday's closing price -- is going to come to an ugly end, probably sooner rather than later.

Yet we should be thankful to the Reddit crowd that got this movement started, because the crazy trading frenzy they launched ended up introducing the stock market to a whole new class of investors who might not otherwise be interested in investing: teenagers.

Wells Fargo surveyed hundreds of teens and their parents and found that while chat room traders were flocking to the video game retailer's stock, the social media sensation it caused also attracted the attention of 13- to 17-year-olds.

Because the stock market holds the greatest potential for long-term wealth building, that bodes well for the financial future of these kids. But the key is to make sure they don't take away the wrong lessons from this singular event. 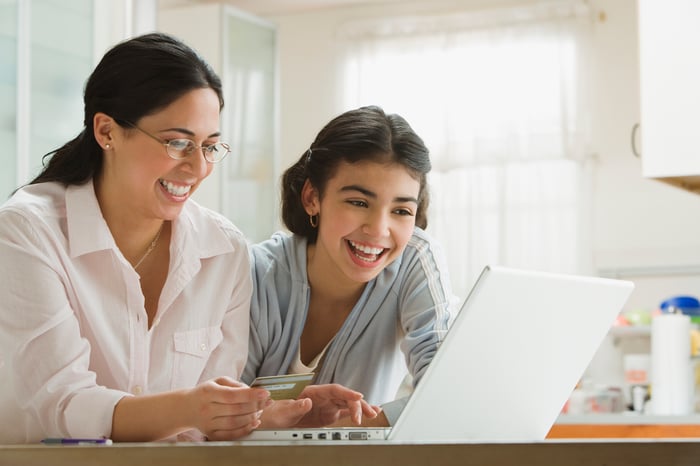 Wells Fargo surveyed 318 teens and 304 parents of teens about household finances, and found a heightened interest in investing because of the massive short squeeze Reddit traders engineered on GameStop's stock.

The January rally that saw shares of the video game retailer rocket 1,800% higher in just a few weeks also piqued the interest of teenagers. The survey found 45% of teens became more interested in investing in 2021 specifically because of the GameStop saga. Even more encouraging is that 75% of all the teens said they're ready to learn about investing.

Yet teens need to learn that what they're seeing is not investing, but just another example of the greater fool theory -- namely, that investors keep bidding up the price of a stock as long as they can sell it to a bigger fool, until there are no more fools left who are buying. At that point, the stock price will crater.

GameStop's business still has potential, but the stock is completely untethered to the retailer's underlying fundamentals. At a recent market valuation of around $20 billion, the video game retailer is worth 8 times as much as recreational vehicle maker Winnebago Industries, 4 times as much as tire maker Goodyear Tire & Rubber, and twice as much as Taser maker Axon Enterprise, arguably all companies with better growth prospects than GameStop.

A rare opportunity to seize

The survey follows news that Fidelity Investments is creating a new brokerage account for teens that lets them buy and sell stocks, exchange-traded funds, and Fidelity mutual funds commission-free.

It's arguably not perfect, since there are concerns it could open parents to the so-called "kiddie tax" that was imposed to prevent parents from shifting income to children to avoid paying taxes. But it also recognizes that teens themselves believe they are ready to invest, but need tools to help them.

The Wells Fargo survey found almost 9 out of 10 parents believed their teens were ready to take the plunge on investing, but only 17% had opened a custodial account and invested on their kids' behalf. Another 13% encouraged their teens to use "Monopoly money" and play stock-market simulation games, like Motley Fool CAPS, while only 7% actually bought a stock for the kids for educational purposes.

However, of those parents who took any of those actions, only 20% of teens said their parents actively engaged with them on those actions. It's a missed opportunity to keep interest growing.

Invest in the future

GameStop is arguably the perfect stock for teens to learn about investing. They know the company and the business even if they might not grasp the financials. Its rise to prominence is a teachable moment on what makes for a good investment and the value of having a long-term investment horizon.

It's never too soon to start investing, and parents would do well to use this period of heightened awareness to set their teens on the path to financial independence.

Even though the meteoric rise of GameStop means it will one day return to earth, it doesn't have to be a flameout, but could be a shining example for teens of both how -- and how not -- to invest in stocks.

Wells Fargo is an advertising partner of The Ascent, a Motley Fool company. Rich Duprey has no position in any of the stocks mentioned. The Motley Fool owns shares of and recommends Axon Enterprise. The Motley Fool has a disclosure policy.

GameStop Is Planning a Stock Split. Does That Mean It's Time to Buy?