Please ensure Javascript is enabled for purposes of website accessibility
Log In Help Join The Motley Fool
Free Article Join Over 1 Million Premium Members And Get More In-Depth Stock Guidance and Research
By Rekha Khandelwal - Jun 10, 2021 at 9:02AM

For all that hydrogen can potentially power, investors' enthusiasm for hydrogen fuel cells is plausible. It can be a real clean energy source with zero emissions. It can propel cars, aircraft, ships, buses, trucks, and forklifts, and can also be used in stationary power generation and backup power systems.

But hydrogen fuel cells face onerous challenges in their extensive adoption. Fuel cell companies, including Plug Power (PLUG -5.66%), believe that they can overcome these challenges over time. Let's see what may work in favor of these companies, where they face risks, and what it all means for Plug Power.

The market for hydrogen fuel cells

Plug Power has largely been focused on warehouse forklifts used by companies such as Amazon and Home Depot. Materials handling business accounted for 94% of Plug Power's 2020 revenue. The company is looking to expand its offerings, including in the green hydrogen market through its electrolyzers -- a process that converts electricity and water into hydrogen gas -- and in the rapidly growing electric vehicles market. This should significantly increase the company's total addressable market. Plug Power hopes to generate nearly 40% of its revenue from businesses other than materials handling by 2024. 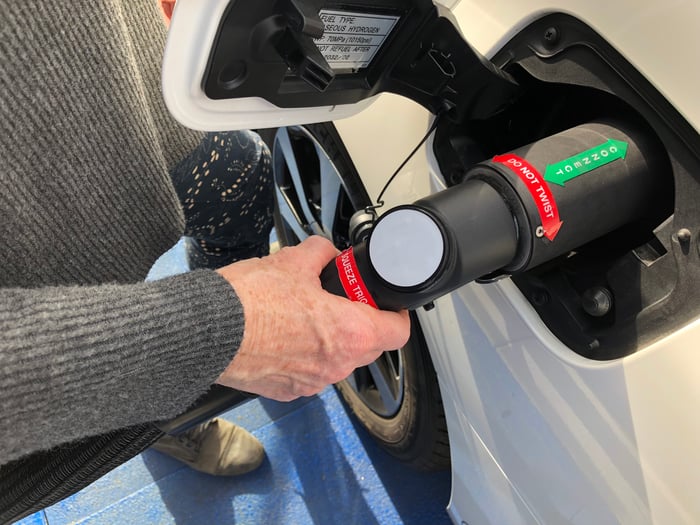 The International Energy Agency recently reported that the number of fuel cell electric vehicles (FCEVs) on roads globally increased 40% from 25,210 in 2019 to around 35,000 in 2020. Korea contributed half of this growth. At the same time, hydrogen refueling stations worldwide increased 15% in 2020.

So, FCEVs face a conundrum. Hydrogen-powered vehicles will not be widespread if there are not enough refueling stations. On the other hand, there won't be much of an incentive to develop charging infrastructure if there are not enough vehicles that need refueling. Fuel cell companies hope that governments can play a vital role here. Korea is leading in this direction, and it increased the number of hydrogen refueling stations in the country by 50% in 2020. Notably, that amounted to just 18 new stations in the country. 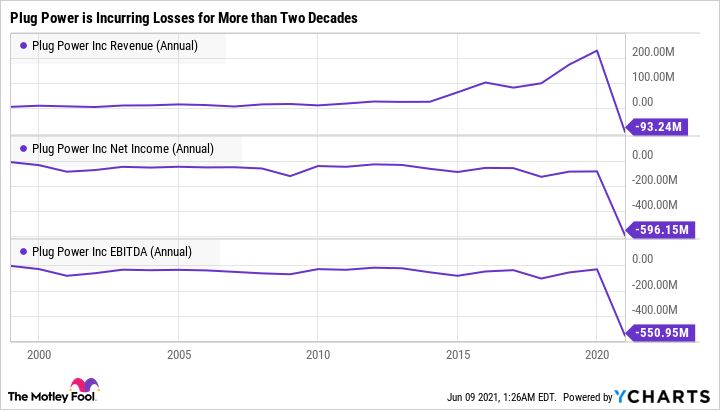 As battery electric vehicles become more mainstream, the incentive to invest in hydrogen infrastructure would likely reduce further. That could mean increased challenges for Plug Power. Falling battery costs and improved technology is driving the growth of BEVs.

Plug Power has not been able to generate profits so far in more than 20 years of its history. I don't see any immediate catalysts to make it profitable in the materials handling business. The company's foray in electrolyzers and the EV market provides it with newer growth avenues. However, as discussed above, the pace of growth of these markets remains uncertain.

One key factor affecting Plug Power's profitability is competing energy and storage sources available at lower costs. Thus, Plug Power's margins, even if it becomes profitable, will likely be thin. The company is overly dependent on a couple of top customers for its revenues. Its revenues could be significantly impacted if it loses any of these top customers. What's more, the company faces increasing competition from other fuel cell makers such FuelCell Energy and Bloom Energy.

Plug Power expects to generate $1.7 billion in gross billings by 2024. Additionally, it expects $250 million in earnings before interest, taxes, depreciation and amortization (EBITDA) by that year. That looks like a tall target, as the company hasn't generated annual positive EBITDA so far in its entire history. Due to the numerous challenges, Plug Power could still be struggling to become profitable five years from now. With Plug Power at a market capitalization of more than $18 billion, I would avoid this loss-making company's stock for now.