Please ensure Javascript is enabled for purposes of website accessibility
Log In Help Join The Motley Fool
Free Article Join Over 1 Million Premium Members And Get More In-Depth Stock Guidance and Research
By Ryan Downie - Jun 16, 2021 at 4:30AM

Biogen's newest FDA clearance sent shares soaring, but investors can still buy this stock for as little as $1.

Biogen (BIIB 1.27%) is the latest biotech stock to light up investment news after a bombshell announcement. One of the company's drugs received unexpected clearance from the FDA, opening the door to monstrous profits in the near future. Shares leaped more than 60% to $407 on the news. That's a hefty price tag that might be prohibitive for some investors, but there's a simple strategy that you can use that makes Biogen affordable for anyone.

A 61% year-to-date return is spectacular, but it might surprise you to see that these gains were achieved in a matter of days. 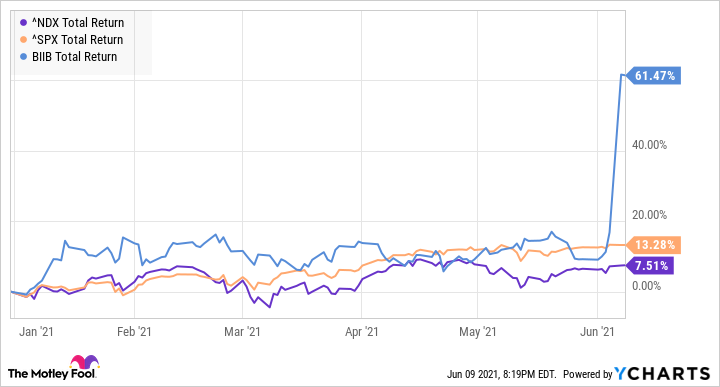 Prior to the recent jump, the stock was fairly flat for 18 months. It bounced around a good amount between $250 and $350 per share, but it never moved decisively in either direction.

On June 7, the company announced that it had received FDA clearance for accelerated approval of its drug ADUHELM. ADUHELM treats Alzheimer's disease by reducing plaque buildup in the brain, and it could be the first genuinely effective pharmaceutical treatment to combat the debilitating illness. 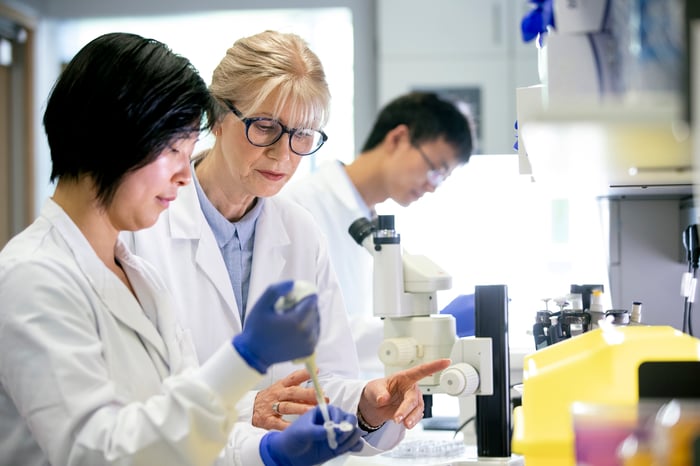 That was very bullish news for investors, and it was compounded by Biogen's eye-popping pricing for ADUHELM. The company indicated that it would charge $56,000 yearly per patient for treatment with the drug. Some politicians have already condemned the high price tag as exploitative, and there's a good chance that Medicare will be able to negotiate to reduce the cost. Still, it's an enormous revenue opportunity. Early forecasts range from $5 billion to $12 billion in peak annual sales.

Investors should recognize that Biogen's success isn't quite guaranteed. Some doctors on the FDA panel actually opposed the clearance, citing doubts about the efficacy of the drug. There's an ongoing post-approval study currently under way, so there will be more data collected that could jeopardize its viability. There are also potential competitors in clinical trials right now. Things are still subject to change, but the surprise announcement was a major step forward that reduced investment risk for Biogen shareholders.

Anyone can afford Biogen stock

Many investors, especially younger people who are just starting to build savings, might be dismayed by Biogen's $400 share price. That's definitely an issue if you're excited about the story and want to throw some money at it.

The average brokerage account balance is around $10,000 for people in their 20s, and $30,000 for people in their 30s.  A single share of Biogen would make up a big chunk of most younger investors' portfolios. You'd have to feel really bullish about the company to take on that much exposure. Even if you're optimistic about the pharmaceutical stock, it's risky to put so many eggs into one basket immediately following great news.

That's exactly why fractional shares were invented and have become so popular in recent years. Fractional shares allow investors to choose the dollar amount they want to purchase. You don't need to buy a whole share of Biogen. Instead, you can buy a portion of a share. If your broker allows $1 trades, then you could buy around 1/400th of a Biogen share. Many of the reputable and popular online stock brokerages provide fractional trading, and a good portion of them allow trades as low as $1.

This is great if you don't have enough cash to purchase a full share of Biogen, or if you just want to allocate your portfolio in a way that requires more flexibility. With other popular stocks such as Berkshire Hathaway, Alphabet, and Amazon boasting incredibly high individual share prices, this is an important feature to consider when choosing a brokerage service that's best for you.

Good News for Retirees: Lower Medicare Part B Premiums Could Be Coming

3 Earnings Reports That Surprised Us