Please ensure Javascript is enabled for purposes of website accessibility
Log In Help Join The Motley Fool
Free Article Join Over 1 Million Premium Members And Get More In-Depth Stock Guidance and Research
By Billy Duberstein - Jun 24, 2021 at 7:00AM

Talking heads like to point to "expensive" tech stocks, but analysts think these technology names are still materially undervalued.

Investors appear to have soured on tech stocks over the last few months. The prospect of higher inflation and a rotation to cheaper "reopening" plays have certainly hurt some of the very stocks that have powered the market's gains over the past few years.

But digital trends aren't going away with the reopening, so if the world goes back to a pre-pandemic "normal," it's reasonable to expect that technology stocks will eventually gain some market leadership and continue their strong relative performance. Today, Wall Street analysts see larger-than-average gains between 35% and 54% for the stocks of Alteryx (AYX -2.67%), Uber Technologies (UBER -5.13%), and Micron Technology (MU -3.51%). 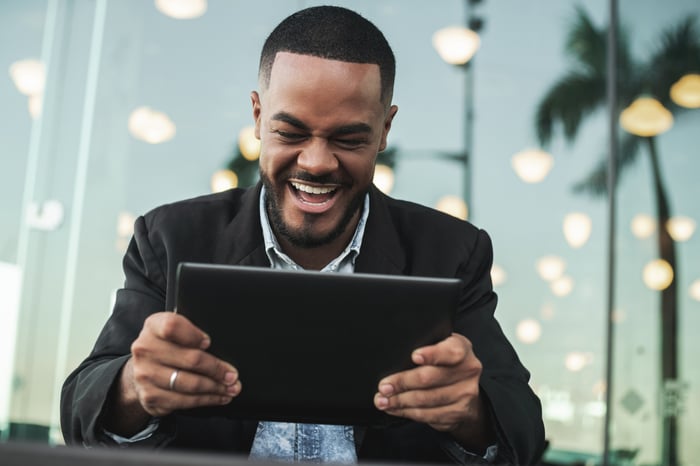 Data analytics software company Alteryx has not only seen its shares fall with its peer group in 2021, but it actually underperformed the sector in 2020 as well. Currently, the stock is down more than 50% from the all-time highs set back in July 2020, and it trades at just 11 times sales, a discount to most of its peers in the SaaS sector.

There are a couple of reasons for Alteryx's relative underperformance. First, it has to use a strange accounting convention, whereby it recognizes 35%-40% of its contract value upfront, with the rest recognized ratably over time. That can really distort things when new business slows down, or when contract terms compress. That happened with the onset of the pandemic, so it appeared that Alteryx's revenue had plunged. However, its customer growth and annual recurring revenue (ARR), which aren't affected by accounting conventions, showed much stronger growth this past year:

While there is some deceleration, it's somewhat inevitable that a company will decelerate as it grows. Moreover, new CEO Mark Anderson, who took over in late 2020, is fairly new to the job. He has taken a more focused approach to sales and marketing, concentrating Alteryx's efforts on the largest global companies with more capacity to spend. So that could be why the customer count is slowing -- Alteryx is implementing a strategy of getting its best customers to spend more. On the recent conference call with analysts, Anderson reiterated that he sees "new and significant expansion opportunities," just within the Global 2000 large-cap companies, where Alteryx only has 39% penetration.

Wall Street analysts appear to believe in Anderson, who has a track record of scaling software businesses, most recently at Palo Alto Networks (PANW -1.91%). The average target among 14 analysts who cover Alteryx stock is $117.71, about 35% upside from current levels.

With the economic reopening at hand, analysts are also warming up to the world's leading ride-hailing business, Uber Technologies. Obviously, Uber's core ride-hailing business took a big hit during the pandemic; however, the company was able to maintain some level of revenue stability thanks to its food delivery business, which skyrocketed with people stuck at home.

Uber has also been streamlining its business, selling off its autonomous vehicle and flying car divisions to start-ups, and management expects the streamlining of the business will lead to profitability in the near term -- at least on an adjusted EBITDA basis.

The ideal scenario would be for food delivery revenue to stick around due to new habits and work-from-anywhere cultures, with ride-sharing bouncing back strongly and the freight business scaling. Analysts appear to share the sunny outlook, with the average price target among 38 analysts at $68.64, about 40% above current stock levels.

Finally, memory chip maker Micron Technology also has lots of upside, according to Wall Street analysts. It may be surprising that Micron is down some 21% from all-time highs, given that memory prices have been rising amid a big chip shortage. Perhaps Micron's participation in the technology sector has contributed to the skepticism.

What's strange is that Micron, unlike a lot of high-growth software stocks, is really more like a cyclical stock, and appears set for higher profits throughout 2021 and into 2022. In fact, the stock only trades at a mere 7.5 times next year's earnings estimates. Micron has also committed to return at least 50% of free cash flow to shareholders via share repurchases, so the company will likely take advantage of the currently discounted stock price by buying back stock.

Of course, Micron's share price is quite volatile, so investors should be prepared. Some analysts appear to be looking for the next down cycle, as Micron tends to boom and bust based on memory prices. In fact, one analyst at Lynx Equity Strategies just downgraded Micron to a sell rating based on the anticipation of memory price slowdowns in the back half of the year; but strangely, that same analyst lowered his price target from $110 to $100, still about 30% higher than today's stock price!

Fears of a downturn seem a bit premature to me, since memory cycles tend to last a couple years, not just two good quarters. Micron remained profitable in the recent downturn, and could potentially make higher highs in this up cycle. Meanwhile, memory-intensive digitization trends around 5G, AI, and the Internet of Things accelerated during the pandemic, which I wouldn't expect to slow down any time soon.