Please ensure Javascript is enabled for purposes of website accessibility
Log In Help Join The Motley Fool
Free Article Join Over 1 Million Premium Members And Get More In-Depth Stock Guidance and Research
By Rich Smith - Jun 26, 2021 at 7:07AM

Not one of them is named "General Dynamics" or "Huntington Ingalls."

Late last year, the U.S. Navy posed a question to six of its favorite military shipbuilders: Would it be possible to build a warship, 200 to 400 feet long and displacing somewhere between 1,000 and 8,000 tons, armed with multiple .50 caliber machine guns, a 30 mm chain gun, and a helicopter, and capable of attacking a beachhead with a reinforced platoon of U.S. Marines -- all for under $130 million?

Oh, and the warship would also need to go from concept to delivery of 30 complete vessels by the end of 2026. 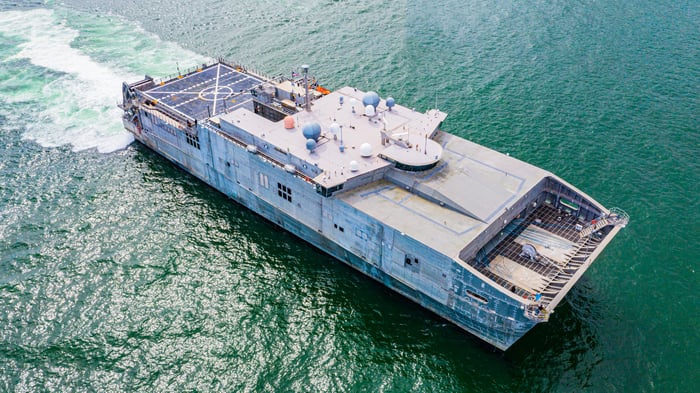 America's shipbuilders responded with enthusiasm: Yes, we can do that. But it turns out the companies responding to the Navy's invitation weren't "the usual suspects" -- defense contracting giants General Dynamics (GD 0.41%), Huntington Ingalls (HII 0.26%), and Lockheed Martin (LMT -0.51%).

Instead, as USNI News reported last week, the five companies interested in building budget-priced Light Amphibious Warships (LAWs) for the Navy were largely private and foreign companies aiming to take a larger role in Pentagon defense contracting. Intriguingly, these are exactly the kinds of companies that buyers might look forward to investing in, one day, through the IPO process.

But this was no fluke. In fact, a Congressional Research Report noted that the specs described for the LAW were such as to permit "any of several [smaller] U.S. shipyards" to build it, thus increasing competition for the contract, and helping to keep prices down. This appears to be exactly what happened.

What it means for investors in the short term

How far prices might fall remains to be seen, but just even the prospect of having the Navy buy 30 brand new warships for under $3.9 billion total is pretty astonishing. ($3.9 billion is roughly the cost of just one Zumwalt-class destroyer.)

On one hand, it's a bargain price for the Navy. On the other hand, $3.9 billion in Navy orders would be multiple times the annual revenue at a company like VT Halter, for example, which, according to data from S&P Global Market Intelligence, probably did less than $1 billion in business last year; or even an established military contractor like Austal, which did just $1.4 billion last year.

Granted, in the near term, the numbers we're talking about will be much smaller (but soon to grow). The five firms named above will share contract awards totaling less than $7.5 million for their concept work, reports USNI. The Navy will consider these concepts, and then award three additional contracts for "preliminary designs" in mid-2022. Toward late 2022, the Navy will pick one single winner for a "design and construction" contract.

What it means for investors in the long term

Winning $3 billion in Navy contracts would be a big deal for any of these companies. But there's an even bigger picture to consider here.

The enthusiasm with which smaller shipbuilders are bidding for the LAW work suggests that the Navy now has the ability to spread more of its shipbuilding work around among multiple "new" defense contractors. And this has the potential to reverse a decades-long trend of increasing consolidation in the defense industry, which has diminished competition and supported strong profit margins among the larger defense companies.

For investors in such larger companies, this is a risk that must be weighed. Will companies like General Dynamics and Huntington Ingalls be forced to cut profit margins to compete with their new rivals, or will they lose business, or will they simply buy out the competition?

In any scenario other than the last one, there's opportunity for investors here. Bollinger in particular has explored the possibility of conducting an IPO in years past. VT Halter actually did IPO back in the 1990s, before later being acquired and made a subsidiary of Singapore Technologies Engineering in 2002.

With billions in new contracts pouring in from the Navy, either of these companies could IPO again.

Will the U.S. Navy Turn Its Expeditionary Fast Transports Into Robots?

The Pentagon Doles Out Contracts to 5 Potential Warship Builders

How to Invest in Defense Stocks

Will Congress Put the Kibosh on the Navy's New Frigates?