Follow the leader. You probably played the game as a kid. However, the idea isn't just for children. Following the leader can work out pretty well with investing. Buying the stocks that the world's top investors are buying can frequently pay off nicely.

There's no question that Cathie Wood deserves a spot among the investing elite. Her ARK Invest exchange-traded funds (ETFs) have been phenomenally successful in recent years. And you can easily find out all of the stocks that Wood has bought or is buying for her ETFs.

However, the problem for some investors is that many of those stocks have share prices beyond their budgets. That's not always the case, though. Here are three Cathie Wood stocks you can buy for less than $50 each. 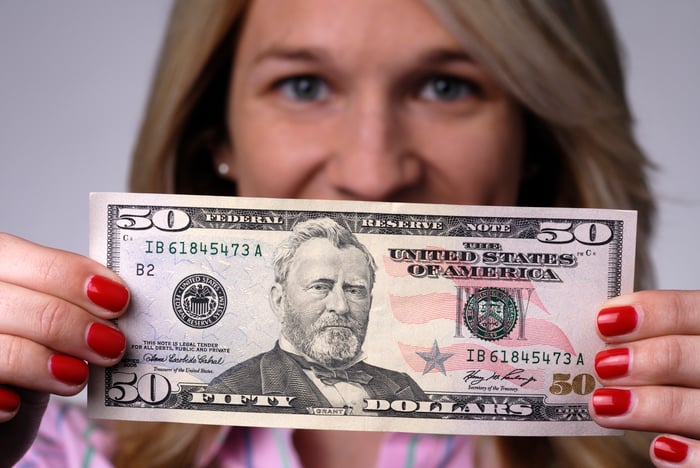 Ionis Pharmaceuticals (NASDAQ:IONS) admittedly hasn't been one of Wood's best-performing picks. The biotech stock is down 31% year to date. This dismal return is primarily due to a big setback for tominersen in a late-stage study targeting genetic disorder Huntington's disease. Ionis licensed the rare-disease drug to Roche in 2017.

However, Wood still believes in Ionis. The stock ranks as the eighth-largest holding in her ARK Genomic Revolution ETF. In June, the ETF bought additional shares of the biotech.

Wood isn't the only believer, though. Wall Street analysts remain bullish about Ionis as well. The consensus one-year price target for the stock reflects a premium of close to 50% above the current share price of a little under $39.

Ionis' key strength is its antisense platform that targets messenger RNA (mRNA) to limit the production of disease-causing proteins. The company's pipeline includes close to 40 experimental antisense therapies, including seven in late-stage studies.

There's a good case to be made that Wood likes Pacific Biosciences of California (NASDAQ:PACB), or PacBio, even more than she likes Ionis. PacBio currently stands as the third-biggest holding for the ARK Genomic Revolution ETF. It's also owned by Wood's ARK Innovation ETF, which bought additional PacBio shares last month.

You won't need much upfront cash to buy PacBio. Its share price is only around $32 right now. And that's up close 23% from the beginning of this year.

PacBio is a leader in long-read genomic sequencing. Its approach enables the sequencing of parts of the human genome that aren't easily sequenced by the more widely used short-read sequencing method.

Probably the most important thing to know about PacBio's sequencing technology is its massive opportunity. The total addressable market for genomic sequencing tops $20 billion annually. PacBio isn't the only company going after this big market, but it's in a solid position to capture a sizable chunk of it.

Two of Wood's ETFs own positions in Skillz (NYSE:SKLZ) -- the ARK Innovation ETF and the ARK Next Generation Internet ETF. Both ETFs scooped up more shares of the gaming stock just a couple of months ago.

Skillz has been a highly volatile stock so far in 2021. Its share price more than doubled in the first two months of the year but then plunged as investors began to rotate out of growth stocks. As a result, Skillz is now one of Wood's least-expensive stocks with a share price of around $18.

Analysts think that Skillz stock could soar more than 40% over the next 12 months. Even if that's overly optimistic, there are several reasons why Skillz should win over the long run.

Most importantly, the opportunity in mobile gaming is huge and growing. Skillz especially has room to expand in international markets. The company also has multiple partnerships that should boost business, including a key deal with the NFL.