Please ensure Javascript is enabled for purposes of website accessibility
Log In Help Join The Motley Fool
Free Article Join Over 1 Million Premium Members And Get More In-Depth Stock Guidance and Research
By Rich Duprey - Jul 18, 2021 at 10:19AM

The market is focusing on the wrong industry data.

Shares of AMMO (POWW 1.18%) tumbled hard this week, falling 14.5% compared to the market indexes, which were essentially flat, on no specific news to the company.

In fact, the ammunition manufacturer issued an earnings update for the second quarter stating it expected to report quarterly sales of $51 million, a 400% increase from the year ago period. 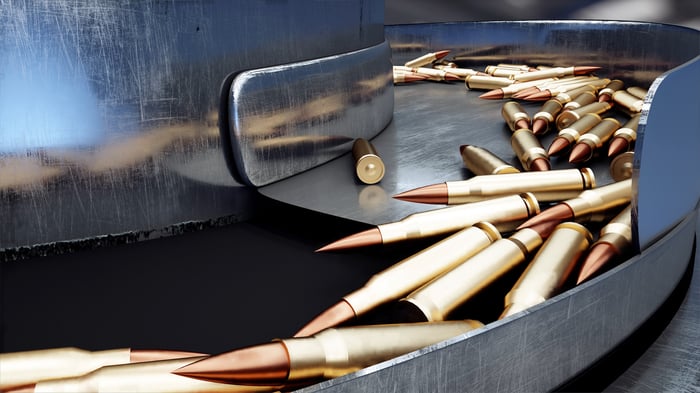 AMMO's decline continued one that began at the start of the month following its first-quarter earnings report and the FBI's report that criminal background checks on potential gun buyers through its National Instant Criminal Background Check System (NICS) plunged 15% from the year ago.

The National Shooting Sports Foundation says background checks adjusted to remove those performed on existing concealed-carry permit holders and other anomalies in the FBI's raw data indicate they are actually down 22% year over year and the so-called "Biden bump" is not over.

AMMO's first-quarter results, however, showed revenue was higher by more than 400%, suggesting this rate of growth is not necessarily a one-off event.

AMMO wasn't alone in seeing its stock fall as gunmakers Smith & Wesson Brands and Sturm, Ruger were down month to date 22% and 10%, respectively, while fellow ammo maker Vista Outdoor was off about 14% for the period.

The sell-off may be premature. While the year-over-year decline in background checks seems alarming, in fact gunmakers and ammo makers are still reporting outsized demand for their products. Last year was a massive year for sales, with millions of people choosing to buy their first-ever firearm, so the comparables the companies are going up against are difficult to surmount, but demand remains elevated and there is still a big shortage of ammunition that will persist for some time to come.

That indicates AMMO will be able to continue growing at a heightened rate and the decline in its stock may not be warranted.