Investing in a small biotech company can be maddening. The stock can rise and fall with no news, leaving shareholders wondering who knows something they don't. Over the long term, it's best to stick with the science and ignore the short-term gyrations. But that can be hard.

Trillium Therapeutics (NASDAQ:TRIL) rose 6,000% between December 2019 and November 2020. New leadership, clinical focus, and promising results whipped up investor interest. From a scientific perspective, nothing has really changed. Yet shares are down 66% from that 2020 peak. They've gotten too cheap to ignore. 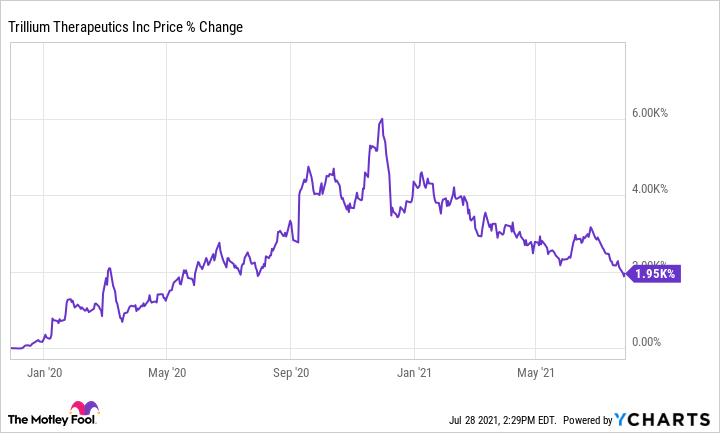 The company has two drug candidates with the same molecular structure. It's testing them in seven different indications and nine settings. Those drugs, TTI-621 and TTI-622, block the protein CD47, which is a "don't eat me" signal that cancer uses to hide from the immune system. The protein is overexpressed in many common cancers like non-Hodgkin's lymphoma, colorectal and ovarian cancers, as well as acute leukemia. 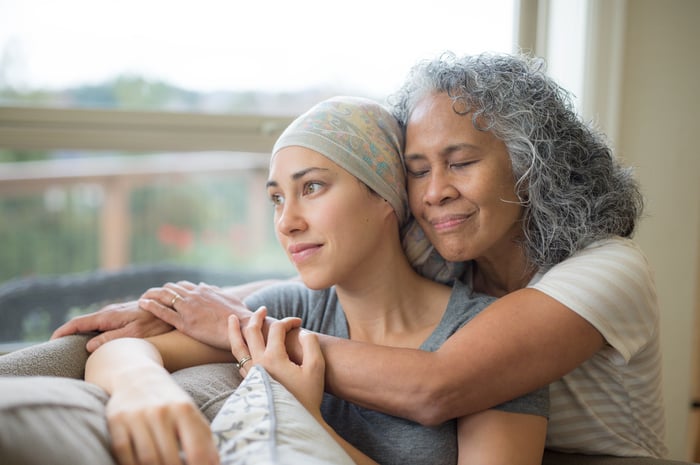 The drugs have a low molecular weight compared to most other CD47 inhibitors, allowing them to enter cells more easily. Another difference between Trillium's candidates and some others in the space is that they don't bind to red blood cells. Drugs that do this complicate treatment by raising the risk of anemia.

One important difference between the two drugs is the strength of the signal they give to the immune system. It's not enough to merely block cancer's cloaking mechanism. For a drug to kill the diseased cells, it also has to signal the immune system to attack.

TTI-622 delivers a more moderate signal. This allows it to stick around longer in the body and provide a more sustained blockage of the CD47 defense. TTI-621's stronger signal comes with a few more adverse reactions -- although none are severe.

For TTI-622, 42 patients had been dosed as of April in cohorts ranging from a dose of 0.05 mg/kg all the way up to 18.0 mg/kg. Roughly one-third of patients who had received several prior treatments ended up in complete or partial remission. Improvement in their condition was observable within eight weeks.

Over 200 patients have been treated with TTI-621. It's been delivered both intratumorally and intravenously in cutaneous T-cell lymphoma patients with nearly identical results. It has reduced skin lesions associated with the disease to the tune of 25% remission.

Remember, these are phase 1 trials designed to find safe doses -- not necessarily to treat the disease. The results hint at the molecule's ability to penetrate solid tumors, one of the most difficult forms of cancer to treat.

When Gilead Sciences bought apply named Forty Seven in March 2020 for $4.9 billion, it seemed like the floodgates might open for the CD47 drugs of smaller biotechs to get snapped up. Abbvie did follow-up in September by purchasing I-Mab's assets for $200 million. A few days later, Pfizer made a more modest investment of $25 million into Trillium. The field has been quiet since.

Perhaps Trillium's toughest competition will come from ALX Oncology (NASDAQ:ALXO). The drugmaker just dosed its first patient in a phase 2 study and announced positive phase 1 data earlier this month. Of course, investors have to pay up for the more advanced drug.

ALX sports a $2.3 billion market cap, compared to only $700 million for Trillium. Despite that gap, ALX hasn't demonstrated results as a monotherapy -- without combining it with other drugs -- like Trillium.

It might not matter. After all, Trillium is combining its own drugs with others in many of its studies.

Management projects a treatable patient population of only 30,000 per year. That could mean any financial windfall from an eventual approval would be split among partners. I wouldn't be surprised if that number grew dramatically with additional positive data.

Luckily, investors have time to let it play out. The company has said it has cash to fund itself into 2023. If its drugs can prove themselves in combating solid tumors, it could open up a market expected to grow to more than $400 billion by 2027.

Despite the patience required, the potential seems worth the risk. Like all small biotechs with no product on the market, a small position is likely to be all you need if it succeeds -- and all you want if it doesn't.