Want to dabble in the market for Alzheimer's therapies but avoid Biogen? Look no further.

After tripling in 2020, neuroscience-focused biotech BioXcel Therapeutics (BTAI -0.41%) has stumbled so far in 2021, losing almost half of its value. While the fall may partially be due to a secondary offering this June, it may also be due to underwhelming results in one of three potential indications for its lead compound, BXCL-501. Fortunately, its two other indications are showing promising results, and the company may be poised to rebound. 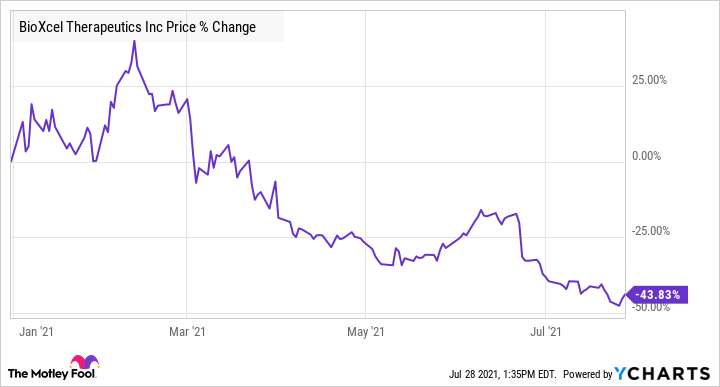 April's bad news shouldn't have been a surprise

BioXcel's lead compound is a dissolving oral film of dexmedetomidine, a drug that has been around for a while. This medication is currently only available through an intravenous (IV) infusion and usually requires a high level of medical care during administration. While there is a plethora of data suggesting that dexmedetomidine can be used in addition to other medications to reduce the amount of opioids utilized in a variety of settings -- including post-operative pain relief and as an adjunct to withdrawal -- there is little to no data suggesting dexmedetomidine is beneficial as a single agent for pain relief or opioid withdrawal. Thus, in April 2021, when the company produced lackluster results as a monotherapy for opioid withdrawal treatment, it probably was not much of a surprise to the medical community. But the news clearly struck a nerve with investors: The stock dropped 14% on the day of the announcement. While hearing bad trial news is never great for investors, this particular run of poor results could be viewed as a potential buying opportunity for biotech enthusiasts. Clinicians have gained a lot of experience with the IV formulation of dexmedetomidine, particularly by helping calm patients on certain forms of breathing machines like BiPAP. Emergency medicine, in particular, has become quite familiar with dexmedetomidine and its calming effects since the COVID-19 pandemic began, so taking the leap to an orally available format shouldn't be too much of a stretch in terms of clinical uptake given the oral formulation is effective.

Data for investors to lean on

Emergency medicine often sees patients at their breaking point. In the treatment of acute agitation associated with schizophrenia and bipolar disorders, BioXcel's orally dissolving dexmedetomidine film BXCL-501 demonstrated an efficacious calming effect in as little as 20 minutes, lasting four hours after treatment with a response rate of about 85% and no serious side effects.

With that sort of addressable market and a PDUFA action date (the date the U.S. Food and Drug Administration must complete its review process by) of Jan. 5, 2022, the company may be ready to bounce back for investors. But it gets even better if we turn to the company's third indication for dexmedetomidine, dementia-related agitation.

Approximately 70% of Alzheimer's patients have breakthrough episodes of agitation. And while Biogen's (BIIB -2.31%) drug, Aduhelm, has made headlines for slowing the progression of Alzheimer's Disease-related dementia, it does not necessarily reduce the number of agitation events experienced. With current treatments including heavily sedating patients with antipsychotics or the utilization of physical restraints, it is clear that better options are needed.

In a phase 1b/2 trial, BXCL-501 provided statistically significant reductions in dementia-related agitation at two hours after administration, with responses lasting for eight hours after treatment. With a 70% response rate and no serious or severe adverse events in this early clinical trial, BXCL-501 could mean fewer restraints and fewer adverse effects of oversedation.

With an estimated one-hundred million episodes of dementia-related agitation in the U.S. in 2020 alone, that's another potential $15 billion dollar market at $150 a dose; and the company expects the number of U.S. patients aged 65 or older with dementia to double from 5.8 million in 2020 to 11.8 million in 2040. BioXcel expects to initiate phase 3 studies in the second half of 2021 after meeting with the FDA later this year to discuss trial design. Given that the company has conducted seven trials in 2.5 years encompassing over 800 patients, look for BioXcel to continue to move efficiently. In phase 3 trials, investors will want to see BXCL-501 match its 70% response rate, with improved agitation scores and minimal to no unwanted side effects.

A better buy than Biogen?

Biogen investors looking for exposure to the Alzheimers Disease market may be in for a tumultuous ride after a 50% gain on the back of Aduhelm approval, followed by reports of slower-than-expected sales in its first few weeks, narrower labeling from the FDA, and major hospital systems taking a stance against administering the expensive intravenous therapy. BioXcel, on the other hand, has positive BXCL-501 data for its two lead indications and clinicians are already utilizing IV dexmedetomidine to help keep patients calm in the hospital. While these two companies are not directly competing with each other in the Alzheimer's Disease market -- Aduhelm slows the progression of disease whereas BXCL-501 treats the symptoms -- if they are competing for space in your portfolio, there seems to be more upside for the small-cap.

Healthcare investors who are looking for exposure to dementia therapies may want to add BioXcel to their watch list. Dexmedetomidine has already been shown to work as an IV therapy, and the neuroscience-focused biotech's oral formulation is promising for agitation for both the bipolar and schizophrenia indications, as well as for patients with dementia. Trading near 52-week lows with a market cap near $1.1 billion and an accompanying addressable market north of $10 billion in the U.S. alone, BioXcel seems like a good bounce-back bet to me.