Solar and wind energy stocks were some of the best-performing companies of 2020, handily outperforming the broader indexes. Yet this year has presented a number of challenges, namely that the renewable energy industry, as a whole, is growing slower than in years past. These challenges have rippled through to smaller companies like TPI Composites (NASDAQ:TPIC), the world's leading independent manufacturer of wind blades.

TPI depends on a healthy and growing global wind energy industry so that it can manufacture more blades to support new wind projects. Unfortunately, lower demand for wind blades, higher raw material costs, and supply chain constraints led TPI to lower its full-year guidance -- sending shares down over 10% on Friday. Should investors take advantage of the sell-off, or are TPI's problems just beginning? 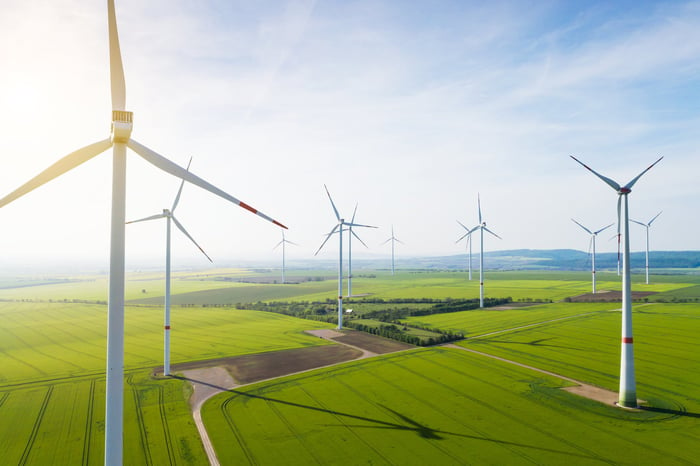 The COVID-19 pandemic followed by a general slowdown in the wind energy industry couldn't have come at a worse time for TPI. Over the last few years, the company ramped up spending and grew its manufacturing capacity in the U.S., Turkey, Mexico, China, and India. TPI's customers are major original equipment manufacturers (OEMs) like General Electric, Nordex, Siemens Gamesa Renewable Energy, and Vestas. The idea is that building blade manufacturing facilities where these OEMs need a supplier would naturally grow TPI's top and bottom line over time. The strategy makes sense given renewable energy costs have come down, there's a growing interest in clean energy, and government subsidies remain robust in many parts of the world.

At first, investors embraced the spending plan as TPI's stock price more than doubled between the end of 2018 and the end of 2020. But higher spending took a toll on TPI's bottom line as the company failed to turn a profit in 2019 or 2020 (and probably won't in 2021 either).

From in-favor to out-of-favor

Shares of TPI Composites crashed 40% in late February and early March when Wall Street didn't like the company's 2020 performance and guidance. The company's updated guidance is even worse, so it's unsurprising that shares of TPI have continued to sell off.

The long-term game plan to expand the business, tap into developing markets, and partner with existing and new OEMs under long-term supply agreements (LTSAs) sounds great, but it only works if the company is able to grow. The issue is that management doesn't think the business can return to growth until 2023 at the earliest, effectively hanging shareholders out to dry.

Aside from a lack of meaningful revenue growth and uncertain profitability, TPI's balance sheet is in worse shape than in years past. Higher spending and negative free cash flow (FCF) have transformed the renewable energy company's once-positive net cash position into a rather sizable net debt position of $98 million. 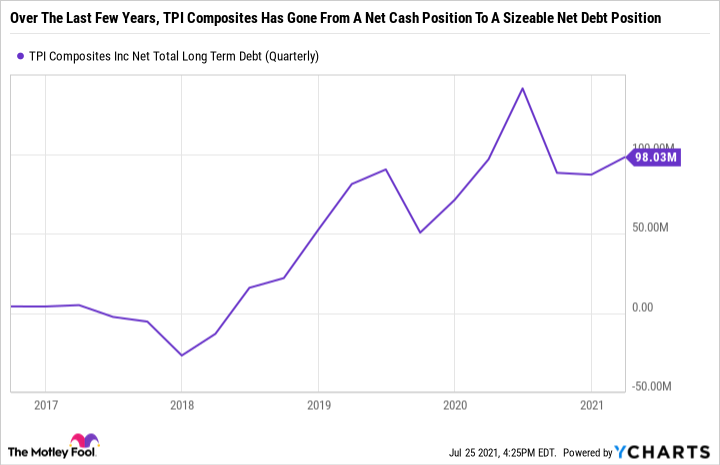 Rising interest rates shouldn't be too much of a problem for TPI, but the company will likely continue to rely on debt or deplete its existing cash position until its business turns around.

Investments have yet to pay off

Despite TPI's initial 2021 forecast of just 7.8% revenue growth, the company expected it would eke out a slight full-year profit of between $13 million and $22 million. It wasn't much, but it would have been a step in the right direction as TPI shifts its business from growth to capitalizing on its now much higher manufacturing capacity. However, the company's projected second-quarter loss of $42.6 million coming off a slight loss in the first quarter calls its profitability into question.

During its first-quarter conference call, management suggested TPI was seeing a revenue shift from the second quarter to the second half of the year, indicating that sales would come, just slightly later than expected. However, if we read between the lines of last week's business update, it's clear to see this optimistic guidance is now off the table. Simple math pegs the company's projected first half of 2021 revenue at $863.5 million, which is right around half of its updated full-year guidance of $1.75 billion to $1.8 billion. If it were true that sales would pick up in the second half of the year, we should have seen TPI's lower second-quarter guidance offset by higher full-year projections, but that didn't happen.

The bigger issue is that TPI has spent the money, but it has yet to see a sizable return on its investments. Therefore, it's unsurprising to see that TPI's return on invested capital (ROIC) has plummeted over the last five years, finishing negative in 2020. 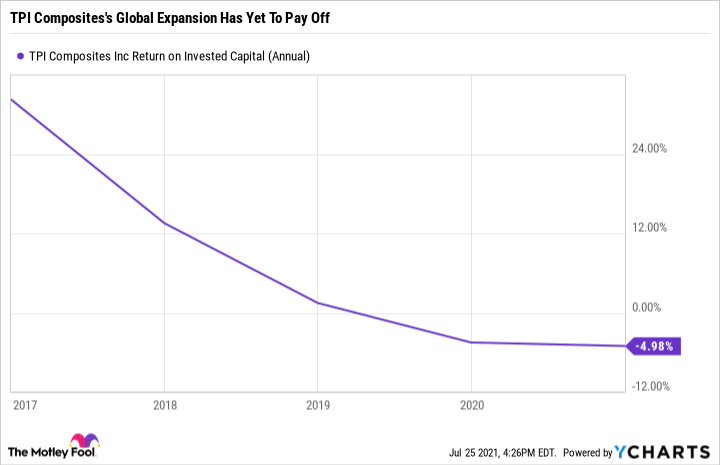 The company's decision to go on a multi-year spending spree looks bad in hindsight, but it made sense at the time. The long-term potential of renewable energy has never been better, but it's hard to ignore the challenges that smaller companies like TPI will face in the short to medium term. Given the updated guidance and lack of growth, it's looking like investors will have to wait even longer for the company to begin to see meaningful returns from its buildout. Therefore, it's likely prudent to only invest in TPI only if you're content with waiting a few years for the long-term thesis to play out. Aside from new deals, contract extensions/renewals, or unexpected guidance updates, there just isn't a lot to get excited about with TPI right now.