In April 2020, Satya Nadella, the CEO of Microsoft, said, "we've seen two years worth of digital transformation in two months." He has a point. The COVID-19 pandemic accelerated the development of video conferencing, remote communication, cybersecurity, e-commerce, and a slew of other trends. What is less talked about is how much the pandemic indirectly accelerated the energy transition from fossil fuels to renewables.

Wind energy and solar energy are estimated to have accounted for 90% of new capacity installations in 2020. Technological advancements and scale are lowering solar and wind energy costs. Onshore wind and solar PV are now expected to be cheaper than fossil fuel sources as early as 2025. 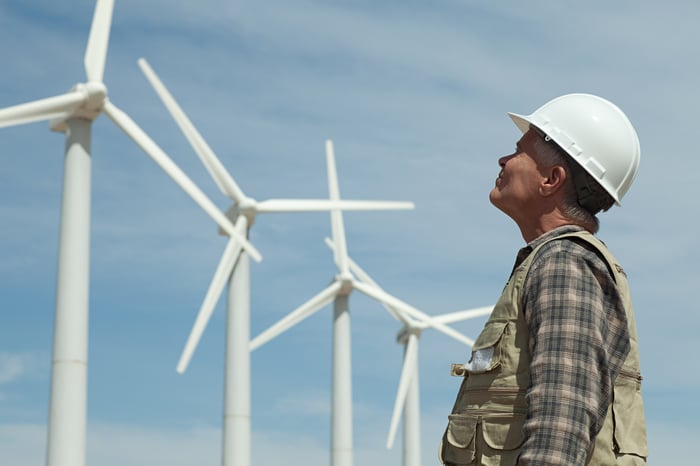 Like film production, wind projects have a director. That's the OEM. Leading OEMs include Vestas, GE (NYSE:GE), Nordex, Siemens Gamesa, and Enercon. When you think of wind energy the first thing that comes to mind is probably the massive clusters of wind turbines that paint the landscapes of West Texas, the Great Plains, and the Midwest. The majority of these turbines are supplied by the OEMs, but not all. In fact, blades, towers, and other components can come from a variety of suppliers as long as they fit the OEM's project specifications. One of the biggest misconceptions about wind projects is that the OEM supplies everything when in reality they are more so coordinating the logistics of the project and working with trusted suppliers that can manufacture components according to its specs.

From there, the OEM creates the package and sells it to the operator. Depending on the size of the OEM, they could handle construction management and installations as well. Like a director in a movie, the OEM calls the shots and manages the project, but it relies on a cast and crew to get the job done.

If the OEM is the director of the wind project, then the operator would be the producer. The operator is the one that finances the project. It buys and owns the equipment, manages the project once it's built, and sells the power to the electrical grid. Unlike the OEMs, which are paid to design and build the project, the operator is responsible for the power itself and ultimately has to figure out which public, private, commercial, and residential customers to sell the electricity to. Leading U.S. operators are utilities like NextEra Energy (NYSE:NEE), Xcel Energy, and MidAmerican Energy (part of Warren Buffett's Berkshire Hathaway). And more recently, oil and gas companies are operating wind projects, too.

Several traditional oil and gas majors are shifting gears into the renewable energy space as operators as well. Total and Shell are investing in renewables, but BP (NYSE:BP) and Equinor (NYSE:EQNR) -- in particular -- are the majors that are aggressively investing in wind energy. Between 2019 and 2030, BP plans to decrease oil production by 40% and increase renewable capacity 20-fold. Equinor has one of the largest offshore wind portfolios and recently partnered with BP to tag-team the development of two of its largest projects. Like the utilities, these oil and gas companies are financing and managing wind projects. BP's specialty is onshore wind, whereas Equnor is positioned to transform itself into the world's leading offshore wind energy operator. 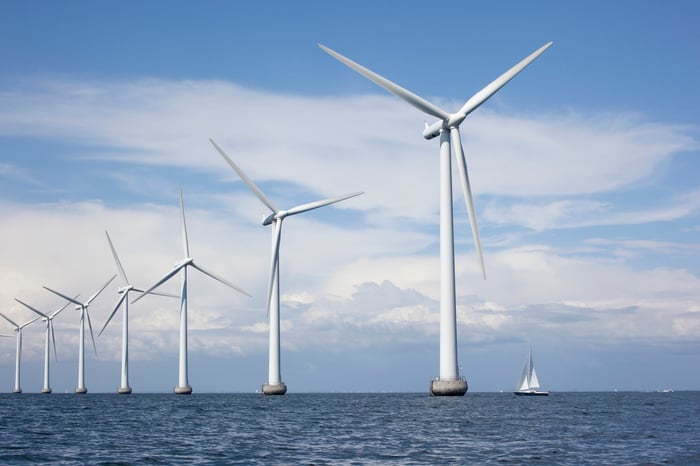 As mentioned, the OEM usually supplies wind turbine towers and blades. But it also outsources based on a variety of factors, namely cost and logistics. For example, if an OEM is managing a project in a location far away from its manufacturing facilities, it's likely cheaper to go with an external supplier. And that happens more than you may realize. In fact, TPI Composites supplied 18% of the world's onshore wind blades in 2019. Its largest customers are the world's leading OEMs, which contract TPI under long-term service agreements. Strategically located blade facilities are crucial to cost savings -- so much so that GE acquired TPI's largest competitor, LM Wind Power, in 2017 in an effort to expand its production capability.

Similar to the blade market, OEMs make the majority of towers. Independent manufacturers such as Broadwind Energy supply a substantial amount of wind towers in North America.

Aside from the blades and the towers, there are several other components that go into a wind package. The OEM will work with suppliers that manufacture drive systems, turbine controls, grid integration technology, generators, gearboxes, power electronics, parts, and other components according to the OEMs spec. They'll also work with software and electronic companies that supply control systems. Depending on the OEM, some of these functions can be provided and supplied in-house.

EPCs are hired for engineering expertise, logistics functions, and to construct the project. OEMs large and small will often contract local EPCs to help develop the project. As mentioned, a misconception is that the OEMs are doing everything themselves when in reality they are designing and executing the project and managing several other smaller teams. However, larger OEMs like Vestas will often win several of the EPC contracts themselves since they have the scale to do so. For what the OEM can't provide, it relies on the EPC. Tasks include electrical and mechanical work, infrastructure, logistics, construction, etc.

Most leading U.S. EPCs are privately held firms, many of which bid for a variety of projects (including wind). There are small local EPCs that focus strictly on wind and/or solar energy. But there are no publicly traded EPCs that focus solely on wind energy. 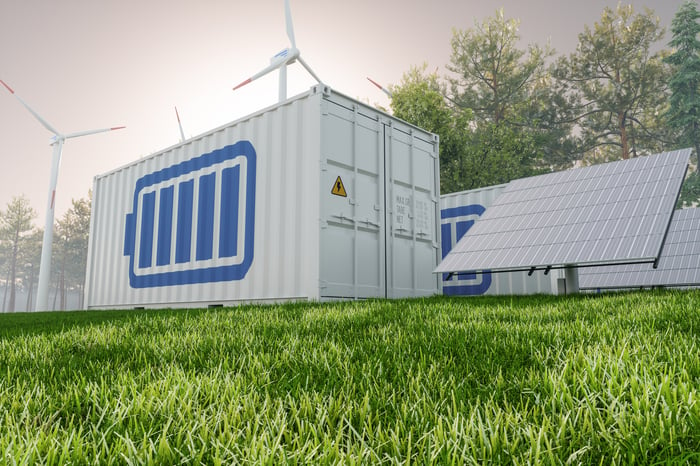 At their core, wind projects are like other industrial megaprojects. There's someone in charge, someone with money, and a bunch of other companies that do everything in between. A trend worth following is the push for large OEMs to expand across the wind energy supply chain. GE's acquisition of LM Power and Siemens' partnership with AES are two recent examples of this. It will be interesting to see if this spending reduces costs over the long term and allows the OEM to bid for more contracts.

Determining which segment to invest in will depend on your risk tolerance and interest in other energy and industrial functions (GE and Siemens do a whole lot more than just wind). For investors new to wind, NextEra Energy is probably the best introductory stock to buy. The company has steady earnings, a stable and growing dividend, and loads of new wind projects in the works.