The automaker's margin was eye-popping. Was it a fluke?

Ferrari (NYSE: RACE) said on Monday that its second-quarter operating profit rose nearly 15% from its result in the second quarter of 2019, before the COVID-19 pandemic, as it began shipments of a higher-priced new super sports car to eager buyers.

On a per-share basis, Ferrari earned 1.11 euros ($1.32) in the second quarter, trouncing its 0.04 euro year-ago result and coming in ahead of the consensus Wall Street estimate of $1.20 as reported by Thomson Reuters. But revenue of 1.04 billion euros ($1.23 billion) fell a bit short of Wall Street's $1.25 billion expectation.

You might have noted that Ferrari's operating profit beat estimates, but its revenue fell a bit short of analysts' expectations. That suggests that its profitability was greater than expected, and it was: EBIT margin (earnings before interest and tax, divided by revenue) was a stout 26.5% in the second quarter, up from just 4% a year ago and 24.3% in the second quarter of 2019.

That's a very impressive result even by Ferrari's lofty profitability standards. But as acting CEO John Elkann said during the company's earnings call, it's likely to be somewhat temporary.

What happened is that the company began deliveries of a new model, the SF90 Stradale sports car, during the quarter. The SF90 Stradale, a gasoline-electric hybrid, is one of the fastest Ferraris ever built and has a starting price to match: $625,000 before options. (Note that the company's options list is lavish, and it has been making it even more lavish in recent quarters in a bid to improve its margins. It's now common for buyers to add more than $100,000 worth of options.)

The Ferrari SF90 Stradale is a hybrid sports car with about 1,000 horsepower. Early demand has been strong despite the stiff $625,000 starting price. Image source: Ferrari.

Analysts tend to watch the mix of V-8-powered and V-12 models in Ferrari's quarterly sales results. As a general rule, Ferrari's V-12 models have higher prices and are more profitable than its (still very expensive and very profitable) V-8 powered models -- though the SF90, which incorporates a V-8 engine in its hybrid drivetrain but is priced and positioned like a V-12 model, breaks that rule somewhat.

The burst of SF90 deliveries, along with continued good demand for an open-top variant of the company's flagship V-12-powered 812 Superfast (called the 812 GTS), made Ferrari's mix somewhat richer than usual during the quarter, Elkann said. He expects the company's product mix to "normalize" during the second half of 2021, as it will include a greater percentage of the V-8 Roma and Portofino M models.

Last but not least, Elkann will soon relinquish the acting CEO title he has held since December, when former CEO Louis Camilleri, who was reportedly ill with COVID, retired on short notice. New CEO Benedetto Vigna will take over as of Sept. 1. Elkann will continue as chairman. 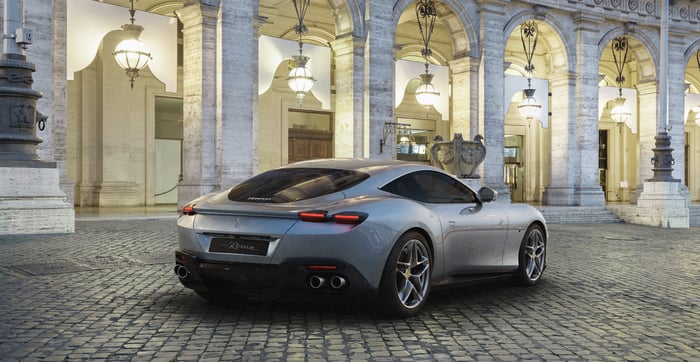 Ferrari hoped that the elegant V-8-powered Roma would draw new, younger buyers to the brand, particularly in China. So far, it seems to be working. Image source: Ferrari.

Ferrari had no one-time items in the second quarter of 2021.

Ferrari raised its full-year expectation for free cash flow attributable to its automaking business to about 450 million euros from the roughly 350 million euros it expected earlier in the year. For the full year, auto investors should now expect:

CFO Antonio Picca Piccon noted that Ferrari currently expects its full-year results to be at or near the high end of those ranges, assuming that the pandemic doesn't materially interfere with its business between now and the end of 2021.

John Rosevear has no position in any of the stocks mentioned. The Motley Fool recommends the following options: long December 2021 $130 calls on Ferrari. The Motley Fool has a disclosure policy.

Why Shares of SolarEdge Technologies Climbed 29.9% in November
363%