Apple's share of the global smartphone market is just one aspect of a much, much bigger picture.

While some of this share loss can be chalked up to the unpredictable disruptions prompted by the pandemic, some of it can't. COVID-19 made matters equally tricky for all smartphone manufacturers, after all. A handful of those manufacturers found a way to poach other brands' prospective buyers anyway.

The thing is, it doesn't really matter when you examine the rest of the relevant data. 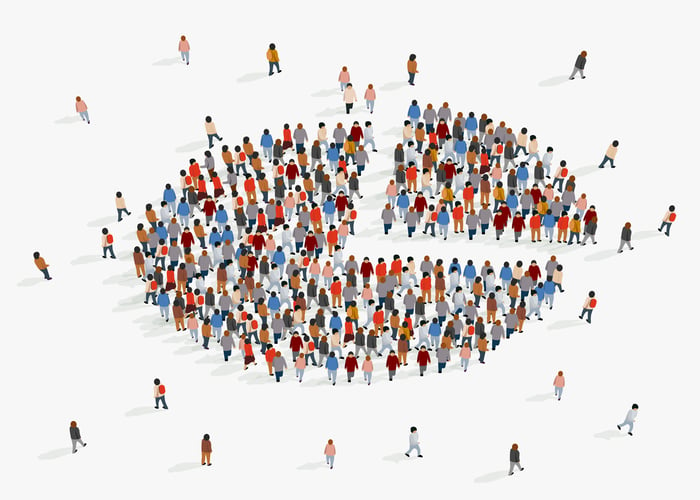 Is the iPhone fading?

Technology market research outfit IDC is the data supplier, publishing the estimated number of smartphones each major manufacturer has delivered in any given quarter. For the three-month stretch ending in June, IDC reports Apple shipped 44.2 million iPhones, up 17.8% from the coronavirus-crimped second quarter a year earlier. That's not bad, even if the numbers come with a footnote about the pandemic. That growth certainly outpaces Samsung's year-over-year unit delivery growth of 9.3%, even if Samsung shipped a much bigger count of 59 million devices.

It's curious, however. Lesser-known smartphone names like OPPO and Vivo upped their deliveries by 37% and 33.7% (respectively) last quarter, while Xiaomi upped its deliveries by 86.6% year over year to assume the No. 2 slot with its 53.1 million shipments.

A one-off? Maybe, or maybe not.

Apple's share last quarter of 14.1% share is actually better than the year-ago Q2 share of 13.5%, and much better than the 10.2% share from the second quarter of 2019. Indeed, the average market share of 16.3% for the past four quarters is above Apple's typical 14% share, skewed higher by an incredibly successful fourth quarter, when the company's share of the smartphone market surged to 23%. It's been unable to hold onto most of the success spurred by the circumstances of the pandemic, though, like Q4's incredible 23.3% share and Q1's 16%. 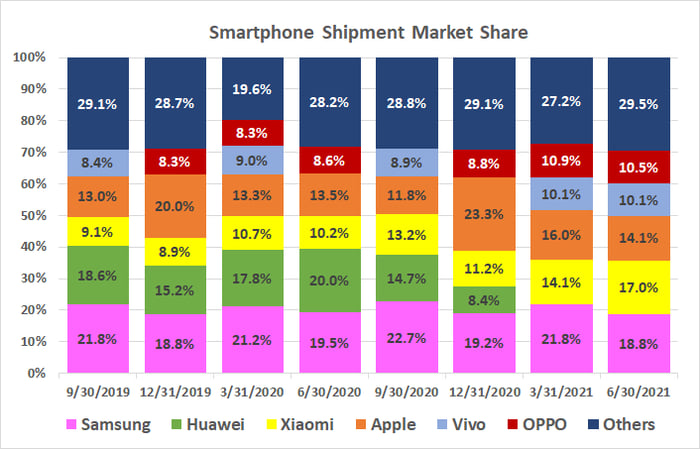 It would also be short-sighted to ignore that much of the iPhone's market share prowess of late is as much a reflection of Huawei's absence and Samsung's inability to connect with consumers as it is about Apple's marketing firepower. These two names are typically Apple's top threats within the higher-end phone market but are mostly impotent right now.

And even then, Apple isn't exactly knocking it out of the park. GlobalStats' statcounter says that after peaking at a 28.8% share in April 2020, the worldwide number of actively used iPhones in the world has peeled back to a share of 26.9%. The iPhone was being used by 56.8% of North American smartphone owners as of late 2018, but after slipping again during the first half of this year now accounts for 53.6% of the market's actively used smartphone base. Clearly, consumers are finding other smartphone options rather than gravitating to the most recognizable name in the business.

Apple shareholders need not panic just yet, however.

The dynamic underscores the risk of looking at anything one-dimensionally; there's always more to the story.

Part of the additional story is that, while Apple may be losing market share, it doesn't mean it's selling fewer smartphones. The company is simply winning less share of the market's current overall growth after holding on to a great deal of its share when the market itself began to contract in 2018. Apple has still sold an average of 57.8 million iPhones in each of past four quarters, logging its highest annualized pace of unit sales since 2015 when the iPhone 6 redefined what a smart mobile device could be. The overall smartphone market is still much smaller than its 2017 peak. 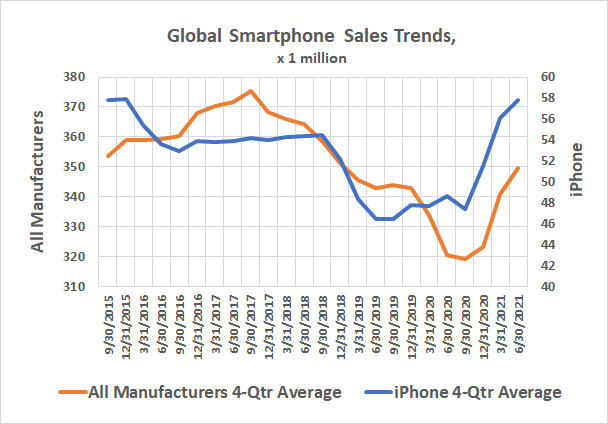 The other reason waning market share isn't an existential threat to Apple is that the company does an incredible job of extracting revenue from iPhone owners once they're in the iOS ecosystem.

Data from Sensor Tower puts things in perspective. The app-market research outfit estimates the average iPhone owner in the United States spent $138 on apps and other digital content via their device in 2020. That figure marks five straight years of spending growth from 2015's annualized average tally of only $33. That's even more impressive given Apple's App Store generated roughly twice as much worldwide revenue as Alphabet's Google Play did in 2020, according to Sensor Tower, even though there are nearly three times as many users of Alphabet's Android operating system as there are iOS users.

And look for more divergence on this front. The iPhone 12 Pro may start out at $1,000 apiece and quickly move upward, but a new iPhone SE brings new consumers into the iOS fold starting at a more affordable $400 a pop.

Should Apple investors keep tabs on the iPhone's market share trend? Sure. It may mean little now, but things change. There will come a time when an alternative to the iPhone excites enough consumers to start making a dent not just in Apple's smartphone share, but also in its total revenue.

If you're looking for a reason not to own a piece of the world's biggest and most profitable company right now, however, shrinking smartphone market share isn't one.