Please ensure Javascript is enabled for purposes of website accessibility
Log In Help Join The Motley Fool
Free Article Join Over 1 Million Premium Members And Get More In-Depth Stock Guidance and Research
By Jason Hall – Aug 8, 2021 at 6:08AM

There are lower-risk energy stocks near the top of the list, but this risk/reward opportunity should not be ignored.

So far this year, the energy sector has crushed it for investors. The Energy Select SPDR ETF (XLE -2.74%) is up 32% in total returns, the best sector in the S&P 500 index, which is up 19% this year. And as the global economy continues to recover from the coronavirus pandemic, the prospects for the energy industry to continue delivering the best returns for investors remains good. 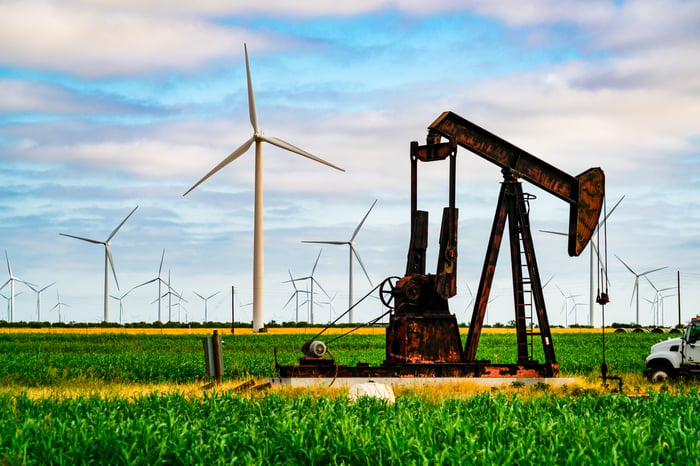 The energy sector is going through massive upheaval at the same time that demand for fossil fuels continues to rise. As a result, there is opportunity for investors both in the transition to renewables, and in companies involved in hydrocarbons. Here are my top three contenders.

Businesses like Brookfield Renewable (BEP -0.99%) (BEPC -1.33%) are doing most of the disruption to oil and gas. Brookfield Renewable owns, develops, and operates utility-scale renewable energy facilities. Its plants produce electricity from hydroelectric, wind, and solar energy, and it sells that clean power on long-term contracts.

In other words, it's more like a utility. But Brookfield Renewable isn't disrupting utilities; it's the fossil fuel industry that it's cutting out of the mix, with the power it produces meaning less coal, gas, or crude oil needed to supply the world's growing energy needs.

As CEO Connor Teskey put it on the Brookfield Renewable second quarter earnings call, "The tailwinds for renewables continue to accelerate... It should come as no surprise that there is both a growing investment opportunity as well as increasing amounts of capital being allocated toward the sector."

That's not just lip service on some future opportunity. The company reported a 23% increase in funds from operations in Q2, and signed 28 new contracts to provide 800 gigawatt hours of renewable energy to customers. With a dividend yield above 3% at recent prices for the MLP units, and a very long record of growing the payout, Brookfield Renewable is a winner I think will continue winning for years to come.

Closest to being a traditional energy company, Tellurian's (TELL -3.82%) business -- or the one it plans to build -- is suppling natural gas from cheap, plentiful North American gas fields to global markets. The company's plan is to build a $27 billion LNG export facility on the U.S. gulf coast. During much of 2020, the company's prospects of survival were very much in question: 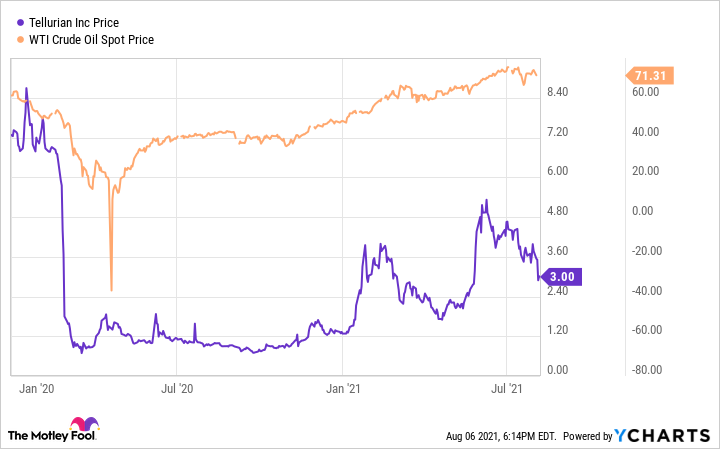 The collapse in global energy demand and oil prices played havoc with Tellurian's schedule. The company's business model is heavily reliant on global energy giants -- companies which count on oil for a substantial part of their profits -- to sign on as partners with Tellurian. These are the companies that would be buying and shipping the LNG Tellurian was producing, but these potential partners had bigger issues on their priority list last year -- simply surviving the worst oil downturn in history -- than signing multibillion-dollar LNG supply agreements with Tellurian.

Fast-forward to 2021, and the company has finally started making progress. On July 29, Tellurian announced a 10-year contract with Royal Dutch Shell that would essentially fill up capacity on the first two planned LNG plants it wants to build, making the entire project economically feasible.

This was a massive step forward that makes it far more likely the company will be able to get the financing to move forward with building its Driftwood facility and unlocking massive financial potential -- and shareholder returns.

The least "energy" of the stocks featured here, TPI Composites manufactures blades for the largest wind turbine companies in the world. Over the years, TPI has expanded the list of wind turbine giants who it counts as customers, investing tens of millions of dollars to expand its manufacturing capacity. As a result, revenue is up almost 200% since 2016, approaching $2 billion annually: 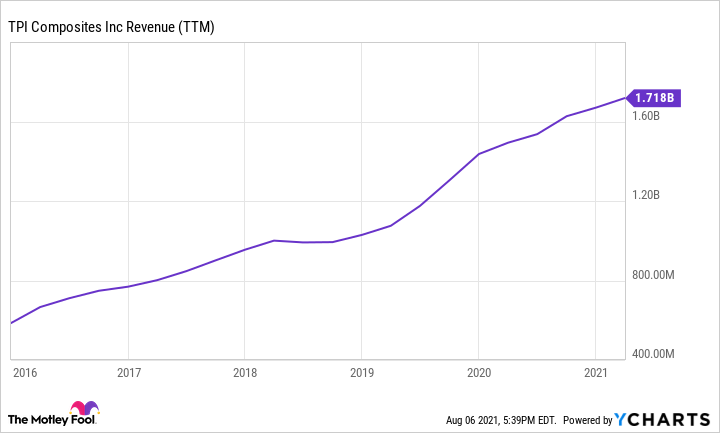 Good so far, right? Well, growth hit a speedbump, with management backing off its guidance for the rest of 2021, and also warning that revenue growth might be stagnant through 2022. As a result, shares are now down almost 50% from the high reached early in 2021.

I think that gives investors looking at TPI Composites as a likely long-term winner in the years ahead, a wonderful opportunity to buy. Wind will play a massive role in the future of energy, and TPI Composites is central to how many turbine makers will meet future demand.

If you're looking for a lower-risk investment, the Tellurian probably shouldn't be your top energy stock to buy, with Brookfield Renewable the better choice. But if you're willing to take on the risk that Tellurian can't raise the money to build Driftwood, an outcome that would probably kill the company, then keep reading.

Here's the core argument: Tellurian's deal with Shell essentially pushes Driftwood across the threshold of economic viability. Barring this agreement (or a similar deal with another buyer) it was unlikely even Charif Souki, Tellurian's co-founder who also founded Cheniere Energy (LNG -1.53%), would be able to talk lenders and investors into providing the billions in capital it will take to get this project off the ground. The calculus has now changed, and I think the risk-reward profile has shifted much farther into investor's favor.

Five years from now, investors who buy Tellurian now could be sitting on an enormous multi-bagger. Just be ready for a volatile ride, and acknowledge that the risks are not insignificant, and could result in very big losses.

Why Oil and Gas Stocks Were Rallying Today
356%