The company is using artificial intelligence to flip lending on its head, and its growth suggests the banks are loving it.

The fintech company uses artificial intelligence to originate loans for banks. It assesses borrowers using alternative metrics like where they attended school, or their job history, and it claims this unique model can approve 175% more loans for the same level of risk. After starting in unsecured finance like personal loans, it recently expanded into car loans. Here are three key takeaways from the recent quarter that suggest its moves are paying off in a big way.

Upstart became a public company in December, and investors are clearly liking the business model, with shares up some 600% since their first day of trading. Rapidly growing revenue is one of the main drivers, as the company continues to leverage its technology to build scale. 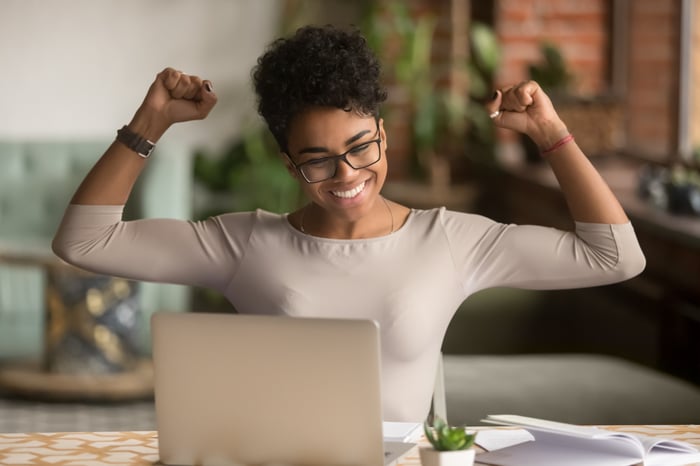 Over 97% of the company's revenue is fee-based; it gets paid when its platform is used to originate a loan for a bank. It means Upstart has no exposure to credit risk, because it's not lending the money itself; therefore it's an attractive way to play an increasing consumer appetite for finance.

Guidance issued by Upstart earlier this year estimated second-quarter revenue would come in between $150 million and $160 million, so the company is growing more quickly than even it expects.

In fact, it just raised its full-year revenue projection from $600 million to $750 million -- the second upward revision this year.

The company's growth trajectory appears to have accelerated this year following its pivot into auto lending. Its car refinancing platform is now accessible by over 95% of the U.S. population, with five new bank partners signing on to lend using Upstart's technology.

Additionally, it has doubled its auto dealership footprint since the beginning of 2021. In the second quarter, it sold $1 billion worth of vehicles through Prodigy, a sales software technology specifically designed for dealerships that Upstart acquired to assist with its transition into car lending.

Dealerships will be a key source of loan originations for the company, and eventually Upstart will be integrated into the Prodigy platform to allow an all-in-one sales and financing solution for car dealers.

In the second quarter, the company claimed its artificial intelligence-based platform instantly approved 71% of all loans completely autonomously. This is part of its pitch to banks, as most would be unable to develop similar tools in-house, so white-labeling Upstart's platform makes a lot of sense.

The third way Upstart crushed earnings was through its profitability. Analysts were expecting the company to generate $0.25 per share in earnings in Q2, but it beat those estimates by 56% to deliver $0.39. Many young tech companies make losses for years while they grow their businesses, but investors are witnessing Upstart's potential scale as it delivers on the bottom line, and not just the top.

At Friday's close, Upstart had a market capitalization of $15.8 billion, meaning it trades at 21 times 2021 forecasted revenue -- that's not cheap, and it's reasonable to question the company's valuation. However, as sales and profitability continue to surge, today's prices could turn out to be surprisingly reasonable for long-term investors with at least a five-year time horizon.

It's not often you find a relatively young technology company leveraging artificial intelligence that also happens to be profitable. The test is how it executes now in much larger lending markets -- but so far, so good.