A second attempt at a test launch ends with the mission scraped and the capsule headed back to the factory for repairs.

Boeing (BA 1.78%) has scuttled the planned launch of its CST-100 Starliner space capsule, a fresh setback for the long-troubled program that has fallen significantly behind a rival offering from Elon Musk's SpaceX.

The decision is unlikely to be fatal for the Starliner program, in part because NASA desperately wants multiple domestic options to transport astronauts into space. But it is a fresh blow to a company that has dealt with a long and growing list of engineering woes in recent years.

And the longer it takes for Boeing to iron out its issues and get the Starliner operating, the more likely it is this program and its issues will be used against the aerospace and defense giant as it is considered for future awards.

This "space race" was a rout

In 2016, NASA awarded Boeing and SpaceX a combined $6.8 billion to develop and fly space capsules capable of taking astronauts to the International Space Station (ISS). The awards were controversial from the start, as Boeing received nearly twice as much funding as SpaceX for essentially the same task order.

NASA hasn't had a domestic option to fly humans into space since the end of the Space Shuttle program in 2011, and the agency was eager to bake redundancy into this new effort to make sure it did not become overly reliant on one contractor. But it has gotten decidedly different results from its two vendors. 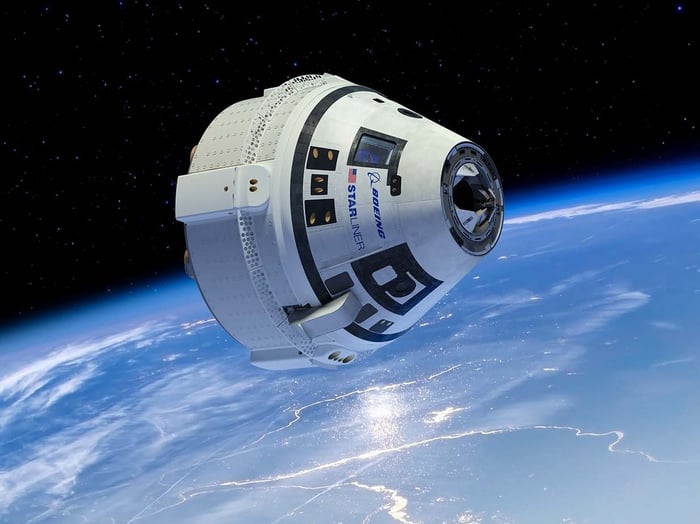 SpaceX's Crew Dragon faced some initial setbacks but has been a huge success for NASA, culminating with a successful first crewed flight in May 2020 and a series of follow-ups in the months since. There is likely to be at least one SpaceX Dragon capsule parked at the ISS for the foreseeable future as NASA ferries astronauts and supplies through the company.

Boeing, meanwhile, has largely been stuck on the launching pad. A December 2019 attempt to send an uncrewed Starliner to the station was marred by a failed engine sequence that caused the capsule to miss its rendezvous. Boeing has mostly been in repair-mode with the capsule ever since, but had returned to Cape Canaveral in Florida last month to finally try again at this key development milestone.

Second time was not the charm

On Aug. 3, with Starliner already mounted on an Atlas V rocket in preparation for launch, Boeing engineers discovered that a dozen valves used in the capsule's propulsion system were stuck in the closed position. Workers spent the last ten days trying to fix the problem, holding out hope of launching the capsule.

On Friday, Boeing conceded the launch would not go off as planned, announcing it would "destack" the capsule from the rocket and return it to its factory for a "deeper-level troubleshooting." The company said it would have to work with NASA and United Launch Alliance, the rocket maker co-owned by Boeing and Lockheed Martin, to work out a new launch date once the valve issue is resolved.

"Mission success in human spaceflight depends on thousands of factors coming together at the right time," John Vollmer, a vice president at Boeing and program manager for the commercial crew program, said in a statement. "We'll continue to work the issue from the Starliner factory and have decided to stand down for this launch window to make way for other national priority missions."

Boeing shareholders are no strangers to engineering setbacks. On the commercial side, the company's 737 MAX was grounded for nearly 18 months after a pair of fatal crashes and both the 787 Dreamliner and 777X models have faced issues in recent months. Boeing's KC-46 military tanker was beset by cost overruns and missed deadlines, and its space unit is facing challenges both with the Starliner and the separate Space Launch System it is building for NASA.

It's dangerous for an investor to read too much into any one mishap, especially considering Boeing still has a backlog of more than 4,000 commercial aircraft orders and billions in defense orders. Boeing is an important supplier to both defense and commercial aerospace markets, and is well-positioned to soak up significant revenue in those areas for years to come.

That said, this latest issue if nothing else is likely to raise fresh questions about Boeing's engineering prowess and make the company's effort to rebuild its reputation following the 737 MAX debacle more difficult.

And while NASA today remains committed to the Starliner, SpaceX now has a longer window to demonstrate the effectiveness of the Dragon capsule and argue to NASA that another option is not necessary. Boeing investors shouldn't assume that NASA will support Starliner indefinitely if issues continue to mount.

For investors these issues are no reason to hit the panic button, but they do make the bull case for Boeing harder to justify. Boeing is very much a company in transition, and it isn't having a lot of luck avoiding flying through turbulence.