Norwegian integrated oil and gas major Equinor (NYSE:EQNR) is firing on all cylinders. Its low-cost, high-profit-margin oil and gas business is benefiting from increased end-user demand and higher prices. However, Equinor intends to gradually wean itself off of fossil fuels. In fact, the company could become the world's leading offshore wind energy operator as it aims to achieve carbon neutrality by 2050.

Here's a breakdown of how Equinor's business is performing now and where it's headed over the coming years. 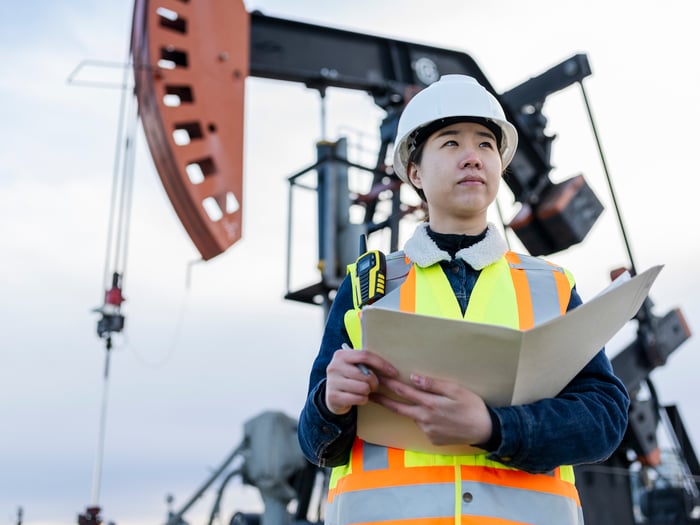 Equinor expects its oil and gas production to be the same in 2030 as it was in 2020. Put another way, growth is expected to come not from producing more fossil fuels, but by making its business more efficient and investing in renewable energy. But because production from existing oil and gas assets declines overtime, Equinor still has to invest in a few projects to make up for the shortfall. It's doing a good job of selecting investments that have low costs of production. For example, it expects projects that are coming online by 2030 will have an average breakeven below $35 per barrel.

In the fourth quarter of 2020, Equinor predicted it would deploy between $9 billion and $10 billion in capital expenditures in 2021. Based on that spending plan, it forecasted $6 billion in FCF assuming an average Brent crude oil price of $50 per barrel. Equinor has maintained this spending plan, but its FCF is directly benefiting from higher oil and gas prices. Brent crude oil is currently above $70 per barrel and has been over $60 per barrel since mid-February.

Equinor has been doing everything it can to capitalize on the higher price market, including running its flexible gas fields at full capacity and limiting the loss of income due to scheduled maintenance. The strategy has worked. In just the first half of 2021, Equinor generated a staggering $9.7 billion in FCF -- which is more than any other full year of FCF generation in company history. For context, consider that its highest annual FCF of $8.33 billion came in 2018, during which Brent crude oil prices averaged $71 per barrel. What's more, Equinor generated around $4 billion in adjusted second-quarter earnings from its Norwegian exploration and production segment, the highest earnings from that segment since Q2 2014 when Brent crude oil was over $100 a barrel.

Equinor's strong FCF supports its growing dividend, share buybacks, and is being used to pay down debt. This is all good news in the short and medium term. But look 10 years out, and it's clear that Equinor's future depends on its ability to profit from wind energy.

If all goes according to plan, the next five years should see a slight increase in oil and gas production followed by flat or gradually declining production. What could follow is a period of declining earnings, FCF, and maybe even a flat dividend before earnings from renewable energy offset these losses. Investors should approach this investment opportunity in a way that suits them, knowing full well that Equinor's intention is to shift away from something it does really well toward something it thinks it can do really well.