These fundamentally strong stocks have been solid performers in the past, and secular tailwinds can drive them even higher.

Last year, U.S. equities witnessed the shortest bear market ever. It was just 33 days and ended March 23, 2020. Subsequently, U.S. equities started rallying and entered the bull phase, which has now extended for over 16 months. The benchmark S&P 500 has almost doubled since then. With U.S. stocks setting new record highs driven by solid second-quarter corporate results, there seems to be no immediate end to the hot streak.

Understandably, some analysts and investors now fear that the market is in a bubble phase and may soon crash. However, in the stock market, it is not "when to invest " but the duration of investment that results in solid returns. Historically, long-term investing in high-quality stocks with competitive advantages has proved to be a successful investment strategy.

If you have some additional cash not required to pay bills, then I believe that investing in these stocks can almost triple your initial investment by 2030. 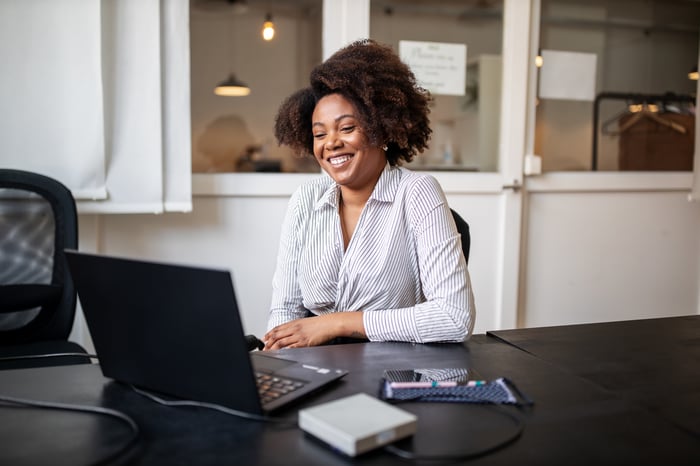 The COVID-19 pandemic forced many consumers to replace cash with various modes of digital payment. This trend will persist even beyond the pandemic, considering that digital payments are safer and more convenient for users as compared to cash transactions. One obvious beneficiary of this secular change has been PayPal (PYPL -1.39%), a leading fintech player with 403 million users and operations across 200 countries.

PayPal's strong two-sided network (32 million merchants and 371 million consumers) has proven to be a major competitive advantage. As more buyers opt for PayPal's digital payment services, more merchants feel the need to adopt these payment methods. This, in turn, attracts even more consumers to PayPal. Competitors find it difficult to replicate this network effect and brand awareness. PayPal is also leveraging data generated by this two-sided network to develop new products, increase conversion for merchants, and reduce the probability of fraud. Thanks to its huge scale, PayPal also enjoys significant pricing power.

Besides PayPal's namesake digital payment platform, Venmo is another big potential growth driver in the company's toolkit. Started as a P2P money sharing platform, the company has significantly expanded Venmo's scope by introducing Venmo credit and business cards, and by enabling merchants to accept payments on this platform. The company has also introduced cryptocurrency trading on Venmo and recently launched a feature allowing credit card customers to buy crypto with cashback. While Venmo's second-quarter total payment volume (TPV) of $58 billion is still a small part of PayPal's $300 billion overall global TPV, the many new features are bound to increase user engagement and revenue potential of this app. PayPal expects Venmo's revenue to be $900 million in fiscal 2021.

PayPal's second-quarter results have missed the consensus estimates, and the company's third-quarter guidance has not been impressive. While these results were impacted by eBay's migration from PayPal, the company has yet not changed its full-year guidance. This is reflective of the company's confidence in bouncing back in the fourth quarter. Against this backdrop, post-earnings pullback in PayPal's share prices offer a good entry opportunity for retail investors in this multi-year growth story.

Another leading fintech player, Square (SQ -7.39%) has become the talk of the town, mainly due to its plans to buy leading Australian buy now, pay later (BNPL) platform Afterpay (AFTP.F) in an all-stock transaction worth around $29 billion. Afterpay's BNPL offers customers the option to pay for their purchases in four interest-free installments. Afterpay collects a small percentage of each transaction as a fee from the merchant as well as late fees from customers missing their payments. This payment option is lucrative for merchants, as it results in higher checkout conversions and longer-term relationships with customers. Hence, if this deal is completed, it will open a new sticky revenue source for Square.

This deal is the latest move in Square's ambitions to disrupt traditional banking. The company launched its industrial bank, Square Financial, in March 2021. This was followed by the launch of small business banking products such as savings and checking accounts as well as lending services in July 2021.

Currently, the seller ecosystem (point-of-sale devices, analytics, capital, and other solutions for merchants) and Cash App (consumer-focused payment system) are the key growth drivers for Square. Although affected negatively during the pandemic, the company's seller ecosystem business, which is focused on physical retail stores, is now improving thanks to the gradual recovery of small businesses and the increasing penetration in the large enterprise segment. The seller ecosystem and Cash App will become even more lucrative after integration with Afterpay, a move that will extend the BNPL facility to the smallest of merchants while giving Afterpay access to the 70 million annually-transacting customers of Cash App. Cash App is on its way to becoming a financial super app.

Square reported an almost doubling of deposits per monthly transacting active customer for Cash App, which is a key revenue driver for this platform. Increasing deposits, coupled with almost four times growth in monthly active users (MAUs) in June 2021 to over 40 million compared to two years ago, has opened several cross-selling opportunities for Square's financial ecosystem. Against this backdrop, although the stock has gained over 70% in the last year, it still seems poised for robust growth in this decade.

Shares of leading cloud and edge-based (content and applications are placed on the localized machines instead of on a centralized server) content delivery network (CDN) and cybersecurity player Cloudflare (NET -10.59%) have gained 18.58% in the past month -- and for several good reasons. The company stands to benefit from the delta-variant-driven spike in coronavirus infection rates, as this would mean increased online activity. The company also posted stellar second-quarter results (ended June 30, 2021) and is inching closer to breakeven.

While the company's short-term growth story is undoubtedly impressive, it is the strength of the company's highly scalable, resilient, and flexible software-defined networking (SDN) model (using software-based network services to replace all network hardware) that will continue to drive its growth in the long run. Competitors such as Akamai Technologies and Limelight Networks have opted for a hardware-based network model, which is difficult to scale and costly to replace.

Cloudflare currently has operations in 200 cities across 100 countries, and it services around 25 million HTTP requests per second. The company's CDN services are currently used by 80.5% of all websites using reverse proxy service, which amounts to 17.5% of all websites on the internet. Already a dominant player in the CDN space, the company is also a force to be reckoned with in the enterprise and network security space. The company is rapidly expanding its presence in the relatively new cloud-native edge security market called Secure Access Service Edge (SASE). In the long run, Cloudflare aims to position itself as a prominent zero-trust security player, a market estimated to be worth $59.43 billion by 2028. Zero-trust security architecture does not trust any user and continuously checks for everyone's credentials and authorizations before providing access to enterprise resources.

Trading near a price-to-sales (P/S) multiple of 72, Cloudflare is undeniably an expensive stock. However, considering its broad presence and strong moat in the networking and cybersecurity space where the company estimates the target addressable market to be $100 billion by 2024, I believe this hyper-growth company has the power to soar even higher in coming years.