All it will take is an FDA approval and a partial repeat of history.

Obtaining U.S. Food and Drug Administration approval for a drug, even after multiple trials in various phases, is not the easiest thing for a pharma company to do. BioMarin (BMRN 2.47%) knows this as well as any company that has been rejected for approval in the past. And so do its investors, who have witnessed two share-price spikes five years apart as excitement built around drug trials; in both cases, the stock receded to less heady levels after the trials were unsuccessful.

From May 2014 through July 2015, growing excitement around a potential treatment for muscular dystrophy drove the stock up by more than 150%, but it gave up almost all of those gains during the following six months as part of a sell-off across the sector, the result of news that the FDA was reviewing a strong competitor for treatment of MD. The FDA ultimately rejected BioMarin's treatment.

Between October 2019 and July 2020, the stock experienced another climb of 86% , but it again gave up nearly all of those gains over the course of the next 12 months. This second spike was on the back of three consecutive quarters of strong revenue growth and positive GAAP income, followed by a string of positive news releases, including positive final results of phase 3 trials for a treatment of children with achondroplasia (a genetic condition that results in disproportionately short arms and legs) and an FDA-accepted priority review application for a gene therapy treatment for hemophilia A.

Now, the company is anticipating FDA approval of a new treatment and preparing for its launch, and one of its most promising candidates is getting a second go at a positive outcome. The hype these around potential approvals could spell a repeat of history for investors, but this time might be a bit different if the end result goes as the company hopes. 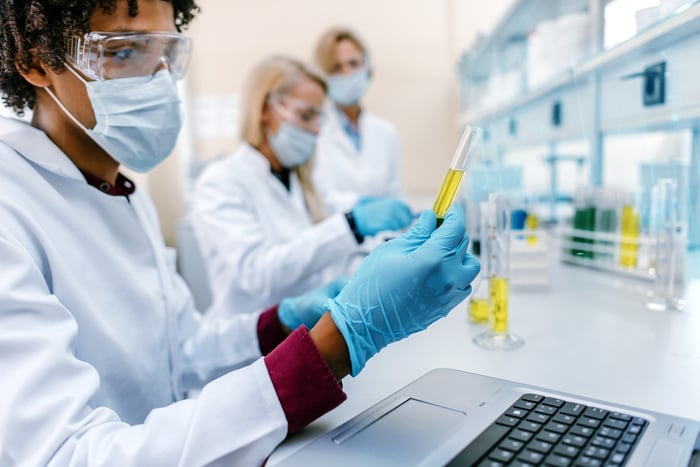 In late June, BioMarin received the European Medicines Agency recommendation for its leading drug candidate, Voxzogo, to treat achondroplasia in patients under 18 years of age. This action by the EMA supports a European CE Mark approval, which is equivalent to an FDA approval in the U.S., and it also signifies that FDA approval is likely.   The disease affects an average of 1 in 27,500 newborns each year, and currently there is no approved treatment.

BioMarin is hoping the EMA's recommendation will be just the beginning of the journey for this treatment, which has massive potential to transform the company. "Teams are currently in place and well-prepared for what could be BioMarin's largest brand yet," chief commercial officer Jeff Ajer said on a conference call.

The company is putting plans in place for a U.S.  launch within four to eight weeks of FDA approval, based on a November decision date. In the meantime, France has approved an early access program that allows BioMarin to provide Voxzogo treatments to patients who have enrolled.

Analysts think this time around could be different for BioMarin, with Christopher Raymond of Piper Sandler predicting that Voxzogo could bring in upward of $600 million in sales by 2025.That would equate to 31% of BioMarin's total 2020 sales of $1.9 billion. Spread across three years, from 2022 through 2025, that represents an average revenue boost of 10% from just one product. The only downside is that competition could come from rival drug candidate Transcon CNP from Ascendis Pharma, which received orphan designation in Europe in 2019 and recently had its FDA decision date -- originally scheduled for this past June -- backed up until Sept. 25.

A little further out on the docket for BioMarin, expected in the second half of 2022, is a second FDA date for its previously rejected hemophilia A gene therapy drug, Roctavian.

After a rejection from the FDA  based on questions around longevity of treatment effects,  the company is now working on gathering data for a two-year follow-up.  After those numbers are in, the company will seek an EMA recommendation upon which it can base a new FDA submission, ideally with that approval occurring in late 2022.

If Roctavian can find its way through to approvals this time, there's a lot of opportunity in the hemophilia market, which stands at $11.8 billion and is growing at a projected 5.5% compound rate through 2027. And thanks to the drug's $2 million-per-dose proposed price, this could mean a lot of revenue, too. But that price may also be its own obstacle given growing political pressure to lower drug costs.

Management is focusing on what it can control, including reductions in research and development expenses, which were $20 million less in the second quarter than in the same time period last year. The company has also guided that selling, general, and administrative expenses could be trimmed by as much as $10 million for the full year, though that would be on the upper end of the guidance range.

Shares of BioMarin are down 10.2% for the year, a worse showing than the 2.8% decline for the biomedical/genetics industry overall . But with excitement building around the potential for transformational products coming to market, the latest drop might be an excellent time for investors to buy low. If you're willing to take on a bit of risk in return for a lot of potential, BioMarin might be just what you're looking for, and I think a double is possible in a year. If these approvals do go through, a $75 share price may look like a bargain in six months.