Please ensure Javascript is enabled for purposes of website accessibility
Log In Help Join The Motley Fool
Free Article Join Over 1 Million Premium Members And Get More In-Depth Stock Guidance and Research
By Jim Halley – Aug 21, 2021 at 11:36AM

These pharmaceutical giants offer strong, dependable dividends and the size to weather the market's ups and downs.

Johnson & Johnson (JNJ -0.70%), Pfizer (PFE -0.16%) and AbbVie (ABBV -0.14%) are never going to be "under-the-radar" stocks, because they're too well known. No company with a market cap of $200 billion or more is going to come out of nowhere to take investors by surprise. Chances are that your uncle, the one who wears socks with his sandals, knows all about these three pharmaceutical giants and might already own stock in them.

In other words, these stocks may be boring. But they're boring for all the right reasons: consistent but sometimes surprising growth, solid and safe dividends, and little volatility.

Johnson & Johnson hit a 52-week high on Tuesday ... but that was only 25.5% above its 52-week low. At a market cap of $466 billion, It's just too big a stock to have the kind of price volatility you will see with a smaller company.

It was founded in 1886, when "Tesla" meant the Tesla Electric Light and Manufacturing Company, not an electric vehicle. The company is a Dividend King that has raised its quarterly payout for 58 consecutive years. The quarterly dividend of $1.06 per share works out to a yield of 2.28%, well above the S&P 500 average of 1.32%. And it is well covered with a 47.72% cash dividend payout ratio.

The company has more than 136,000 employees and offers a range of diverse products, including baby wipes, bandages, medical devices, and drugs. It has 53 late-stage trials in its pipeline, more than most pharmaceutical companies have across every stage of development. Its cash flow is not dependent on a blockbuster drug or any one product, which allowed the company to spend $12.16 billion last year on research and development.

That R&D spending has paid off with surprising growth for such a mature company. In the second quarter, it reported sales of $23.3 billion, up 23% year over year, and earnings per share increased 72.8% to $2.35. The company's research and development also paid off with one of the COVID-19 vaccines, one that seems to be more effective against the delta variant. The company has said it will provide the vaccine on a not-for-profit basis as long as the pandemic rages, but it does stand to profit from the need for it that will likely still exist after the pandemic ebbs.

Pfizer: strong growth, thanks to a vaccine

Pfizer's stock is up 36.54% this year, much of that thanks to the company's successful COVID-19 vaccine. Through six months, revenue of $33.5 billion is up 68% year over year -- and that's after the spinoff last November of its Upjohn generic therapies to Viatris.

Pfizer, which was founded in 1849, 37 years before Johnson & Johnson, didn't just luck into the vaccine opportunity. It is a huge company with roughly 78,500 employees that was prepared for the moment. It spent $9.4 billion in research and development last year and has increased R&D spending by 52.5% over the past five years. The company has a market cap of $275 billion.

Its quarterly dividend of $0.39 represents a yield of 3.09%, and the company has raised it for 11 consecutive years. Pfizer had said earlier this year it would likely cut its dividend to make up for the loss of the Upjohn revenue once Viatris started offering a dividend of its own. Instead of doing that, however, its board decided to keep the dividend at its current rate (the cash dividend payout ratio is only 41.7%). That means that investors who obtained Viatris stock after the spinoff got a dividend raise, because Viatris' initial dividend is $0.11 a share.

The company focuses strictly on pharmaceuticals, so it is not as diverse as Johnson & Johnson, but it also has a huge pipeline with 98 drug candidates as of February. 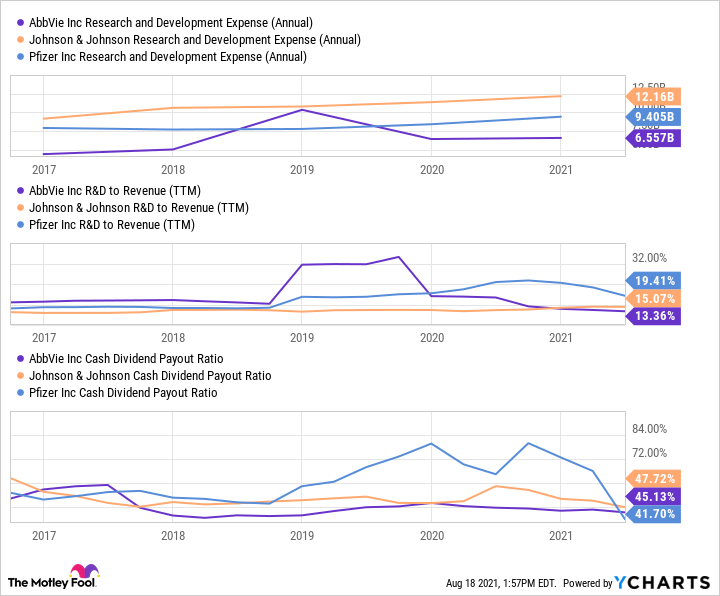 AbbVie: rolling in revenue after the Allergan deal

AbbVie's shares are up just 11.74% this year. Though the pharmaceutical company continues to knock out great quarters, the looming patent cliff for top-selling rheumatoid arthritis drug Humira concerns many investors.

In the meantime, this $210 billion company has the best dividend of these three stocks at $1.35 a share each quarter, offering a yield of 4.35%. AbbVie was part of Abbott Laboratories until being spun off in 2013, and its association with the 133-year-old company makes it a Dividend Aristocrat. Since the spinoff, Abbott has increased its dividend 225%, including a 10% raise this year, but the cash dividend payout ratio is only 45.13%.

Biosimilar competition has already begun to eat into Humira's revenue overseas, but there are plenty of reasons for AbbVie investors to relax, even though the drug will face biosimilars in the United States in two years.

In the second quarter, the company reported revenue of $13.9 billion, an increase of 33.9%. While Humira was still responsible for 30.4% of that revenue, the company has several up-and-coming drugs that already are bringing in $400 million or more per quarter. Blood cancer therapy Imbruvica posted revenue of $1.381 billion, up 7.2% year over year. Venclexta, another blood cancer drug, brought in $435 million, up 43.2% from the prior-year period. Plaque psoriasis therapy Skyrizi brought in $674 million, up more than 100% year over year.

The company's $63 billion purchase of Botox maker Allergan in 2020 is already paying off. Botox Therapeutic brought in $603 million in the quarter, and Botox Cosmetic delivered $584 million in revenue. Antipsychotic medication Vraylar brought in $432 million.

My only concern with AbbVie is that it spends less on R&D than the other two companies, both in total and as a percentage of revenue. It spent $6.5 billion last year on R&D, about 13.36% what it made in revenue.

OK, so you don't really have to choose

I like all three pharmaceutical stocks, but if I had to choose one, I'd pick AbbVie because it has the best dividend and has grown revenue 78.66% over the past five years. I think the concerns about Humira are overblown, but that has helped keep the stock from being overvalued.

Pfizer is a solid choice as well; it also has a strong dividend, and I believe its willingness to spend on R&D will help set it up for the future.

Johnson & Johnson has the least attractive dividend, but the company's diverse revenue streams make it the safest choice of the three.