Please ensure Javascript is enabled for purposes of website accessibility
Log In Help Join The Motley Fool
Free Article Join Over 1 Million Premium Members And Get More In-Depth Stock Guidance and Research
By Rich Smith – Aug 22, 2021 at 6:53AM

In 2023, Varda Space and Rocket Lab will put the first space manufacturing plant in orbit.

It began with a 3D printer. It may end with factories in space.

In 2013, NASA announced it was collaborating with specialized 3D printing company Made in Space on a "Printing in Zero G Experiment" to see if 3D printers could print replacement machine parts, tools, and other equipment for use aboard the International Space Station (ISS).

One of the first items printed in space, says Made in Space, was a simple wrench -- needed to replace an astronaut's misplaced wrench. As it turned out, this was an ideal experiment for two reasons: First, because it demonstrated the advantages of being able to print a necessary item immediately and on-site, rather than being required to "phone home" to Houston and have a new wrench sent up by rocket.

And second, because of the potential cost savings. You see, getting anything physical from Earth to orbit -- be it a satellite or a computer or just a simple wrench -- costs a minimum of $5,000 per kilogram (2.2 pounds). But once it's possible to take raw materials collected "in space," and print them into new, finished items, the cost to orbit will shrink to the cost of emailing a set of instructions to the printer.

And there's a third advantage to manufacturing in space, too -- and it's a big one for investors. 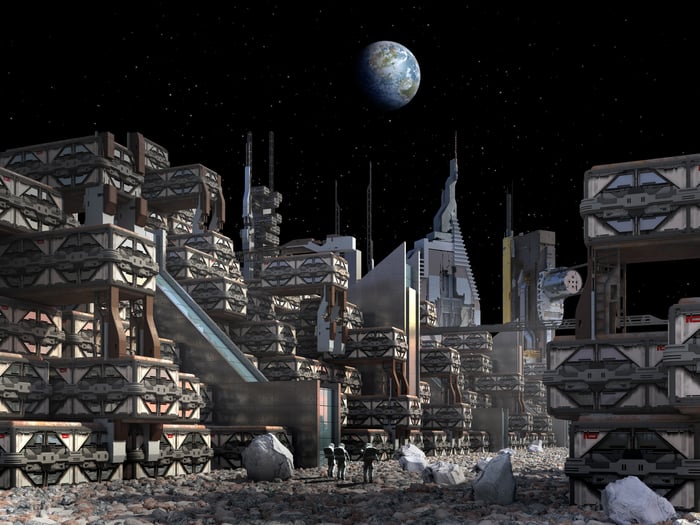 You can't do that here

Turns out that one of the best reasons to manufacture things in space, is the fact that some things can only be manufactured in a zero-gravity environment -- which brings us to Varda Space Industries and Rocket Lab.

S&P Global Market Intelligence shows that Varda Space, which operates out of a Los Angeles suburb just a few miles south of SpaceX, has already attracted $51 million in start-up money from venture capital firms. The company says its mission is to build "the world's first commercial zero-gravity industrial park" in orbit. Only there, says the company, are the conditions right for manufacturing "more powerful fiber optic cables" and "new, life-saving pharmaceuticals" that can't be produced on Earth.

First, though, Varda needs to prove the concept. And for that, it turned to small rocket launcher and soon-to-be IPO Rocket Lab, currently known by its SPAC (special purpose acquisition company) name, Vector Acquisition Corp (VACQ).

As the companies announced last week, Varda has hired Rocket Lab to produce for it three, or possibly four, Photon spacecraft to carry its Varda "space factories" into orbit. Weighing in at just 120 kilograms (265 pounds) each, "factory" is probably a generous term, but Varda says that's big enough to permit each factory to crank out 40 kilograms (88 pounds) to 60 kilograms (132 pounds) of finished goods over the course of three months in orbit. Crucially, these factories will also include "re-entry modules" to return the products manufactured in space to Earth -- which is the ultimate goal of putting factories in space, after all.

"But wait!" you object. Even if Varda's space factories are able to successfully turn raw materials into finished products in space, won't they need to bring the raw materials along with them in the first place?

And the answer to that question is "yes." Similar to how things work with 3D printing on the ISS, Varda is going to have to pay to launch both the space factories themselves, and also the raw materials they will work with. So in this first attempt, at least, we won't see any immediate solution to the high cost of moving mass from Earth to orbit.

That being said, Varda and Rocket Lab are still breaking new ground here, and blazing a trail toward the concept of putting factories in orbit. If they succeed, then the next logical step will be to begin hunting for raw materials already present in space (the moon being the most likely place to prospect). And with access to raw materials secured, Varda envisions a day when it might be building space factories as large as the ISS itself and manufacturing goods in zero gravity at scale.

At that point, it should be possible to cheaply manufacture unique products that can only be manufactured in space, and then deliver them down to Earth.

We're probably years, if not decades, away from seeing this become a reality. But once it happens, an entirely new space economy will be born, offering all sorts of new possibilities for investment. Varda's and Rocket Lab's mission will be one of the first baby steps toward making that happen -- and it will happen in Q1 2023.