Please ensure Javascript is enabled for purposes of website accessibility
Log In Help Join The Motley Fool
Free Article Join Over 1 Million Premium Members And Get More In-Depth Stock Guidance and Research
By Bram Berkowitz – Sep 2, 2021 at 7:01AM

The bank has been ignored by investors for many years now, but it has made significant progress in improving its business.

Large British banks have not seen much love from investors since the Great Recession. Brexit and very low interest rates have not helped. The largest banks headquartered in the United Kingdom all currently trade well below tangible book value (essentially, what a bank would be worth if it were to be immediately liquidated).

One British bank stock that I am starting to view as a value stock is Barclays (BCS 1.43%), a predominantly consumer and investment bank that also has operations in North America, Europe, and other parts of the world. While it has been a long slog for the bank over the past decade, I believe the bank is now much better positioned as a value play as opposed to a value trap.

Barclays is a very large bank with the equivalent of nearly $1.9 trillion in assets, which puts it in line with large U.S. banks such as Citigroup and Wells Fargo in terms of size. it has three primary divisions:

Barclays has been trailing its U.K. bank peers in price to tangible book value (more formally, TBV is a bank's equity minus its intangible assets and goodwill). 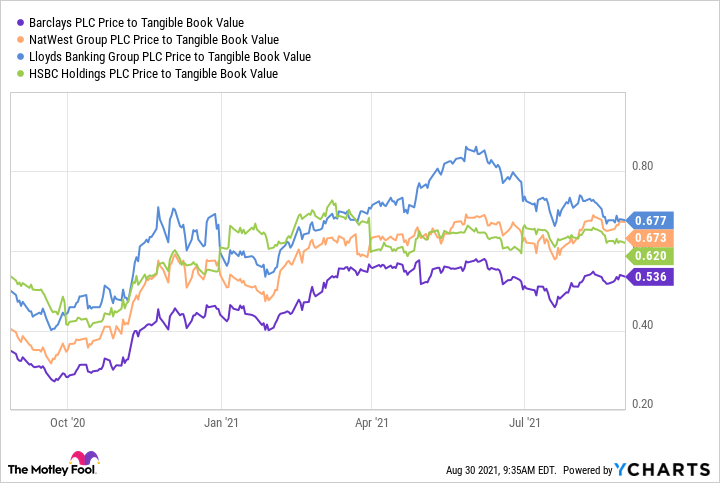 But the bank has been putting up stronger returns in its business lines in recent years. In the second quarter, Barclays generated a profit of 2.3 billion pounds sterling, which is equivalent to an 18.1% return on average tangible shareholders' equity, the technical rate of return a bank makes on its physical capital. The second quarter included a nearly 800 million pound release of reserve capital previously set aside for loan losses that did not materialize, but the cards and consumer business are showing signs of recovery and the corporate and investment bank continued to perform strongly, albeit not as strongly as some past quarters during the pandemic when investment banking and capital markets in the sector flourished.

While an 18.1% return on average tangible shareholders' equity is not sustainable given the big release, management said it believes it can deliver a return on tangible equity above 10% for 2021, a number it believes is also sustainable going forward. Large banks in the U.S. like JPMorgan Chase and Bank of America typically do much better than that, but most banks that can do 10% consistently do not trade below TBV. 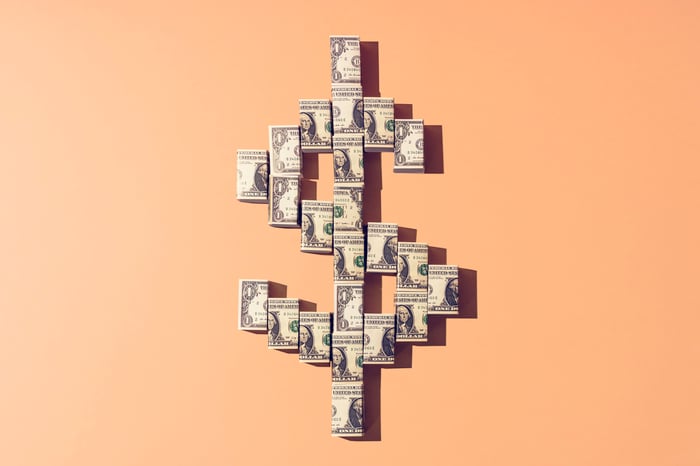 Although investors may have concerns about the persistent low interest rate environment in the U.K., and how long volatile corporate and investment banking revenue will last, there are reasons to believe a consistent 10% return on tangible equity is achievable.

For one, Barclays CEO Jes Staley is bullish on the investment banking division in the near and long terms. On the company's recent second-quarter earnings call, he said the pipeline for M&A and equity and debt capital markets is quite strong right now. Staley also said the capital markets sector is growing at an extremely fast clip right now, largely because regulation in the financial sector is pushing more financing in the capital markets and less from traditional lending funded by bank balance sheets.

The bank also hasn't seen as strong of a rebound in consumer spending and its merchant acquiring payments business as U.S. banks. That might be a little concerning because, as one analyst on the bank's recent earnings call pointed out, recent data suggests Barclays has lost some market share in its cards business. But management said the ceded market share is more a result of taking a cautious approach last year during the pandemic, and that it is committed to growing the cards business. Additionally, recent data shows that most consumer spending trends were going in the right direction in Q2.

Barclays also recently announced that it intends to acquire a $3.8 billion card portfolio associated with the clothing retailer Gap from Synchrony Financial. Barclays will become the exclusive credit card issuer for Gap in May 2022. Growing the credit card business and its associated revenue will help offset some of the volatility from investment banking and other commission-based businesses, which currently make up 66% of Barclay's revenue. More consistent income streams could also lead to a higher valuation.

Last, and arguably most important as a near-term catalyst, Barclays has begun repurchasing shares for the first time in a while. The bank completed a 700 million pound repurchase in April and then announced another 500 million pound repurchase plan not too long ago. That's a solid start, and not only does the bank have the necessary capital to carry out this plan, but Staley gave every indication that share repurchases could start to happen more frequently. As he said on the company's latest earnings call:

Barclays hasn't engaged in the buyback program in many, many years. So this is a new thing. And I don't think it's a one-off. And with the level of profitability that we're now generating and the capital levels that we have, if we have shareholders that are -- that remain willing to sell stock at a discount to book value, we're happy to buy it.

Barclays has traded below TBV for a while, so I can understand investors' wariness of a value trap. But management has indicated it thinks it can consistently generate a 10% return on tangible equity. The corporate and investment bank performance will be key to this, but hopefully management can continue to grow its consumer payments and cards business to add more stability to earnings.

The share repurchase plans are also huge, specifically because Barclays trades below TBV. Whenever banks repurchase shares below TBV, the math works out so that the repurchases not only grow earnings per share, but also TBV, which is important because banks tend to trade relative to their TBV, so a growing TBV can boost the stock price. Ultimately, while the struggle has been real for many years, Barclays has momentum that makes it look undervalued while trading around 55% of TBV.