The notorious meme stock's quarterly report includes some positives, but the company needs a plan.

The world's foremost meme stock, video game seller GameStop (GME 3.46%) reported its second-quarter results on Sept. 8 after market close. The stock plunged over 7% shortly after the opening bell the next morning, though its price movements remain mostly unpredictable thanks to the army of retail traders who periodically send the stock's value skyrocketing. While some facets of GameStop's report look upbeat, the company likely needs a fundamental strategic refocus before becoming fully viable as a serious investment again.

What the report says

Despite the stock market drop, which mirrors Wall Street's reaction to 11 out of 12 recent GameStop quarterly reports, the company beat analyst consensus expectations on revenue. However, it missed on both GAAP and adjusted earnings per share. Revenue rose 25.6% year over year to $1.18 billion. The company still registered a loss at the bottom line, but the shortfall was smaller -- a net loss of $61.6 million versus Q2 2020's $111.3 million net loss, and a $0.85 loss per share rather than $1.71. 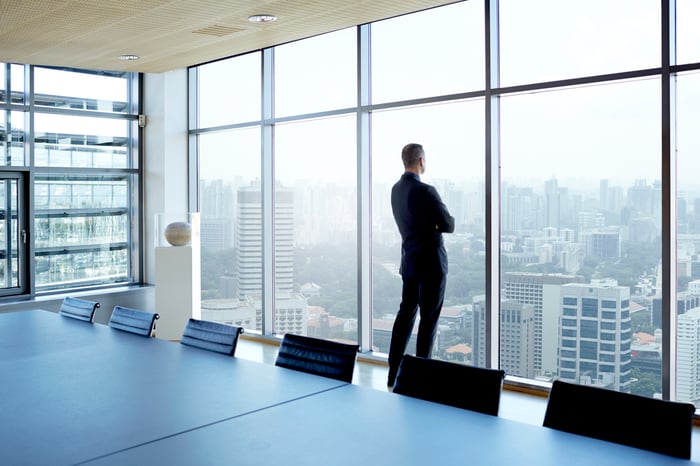 One thing that emerges clearly from the report is that GameStop has plenty of cash. It ended Q2 with $1.78 billion in cash equivalents, a trove theoretically big enough to fund game-changing internal investments, acquisitions, or a complete business model makeover if it chooses to pursue any of these strategies. The cash gains, of course, came at the cost of issuing more stock during the short squeeze and thus diluting the value of each share for investors. As a result, shares outstanding rose 11.7% year over year to 72.6 million shares.

GameStop improved its balance sheet health dramatically by using its cash windfall to deleverage almost completely. The company erased its long-term debt, paying off everything "other than a $47.5 million low-interest loan associated with the French government's pandemic response." While not enough on its own to reverse GameStop's loss of sales over time, freedom from debt will likely be a meaningful benefit to the company going forward, enabling the full use of any resources it obtains for investing in taking its operations in a new direction.

With a balance sheet free of debt and a huge war chest of cash, GameStop is positioned to make a comeback -- provided it comes up with a new strategy and focus, enabling a return to long-term profitability. Moreover, it has the means in its possession for a rebirth. What is needed now is the executive boldness and outside-the-box thinking to turn those means into a concrete and effective plan to reforge itself.

Manufacturing and selling top-end gaming hardware, rather than the games themselves, is one potentially winning approach. The success and vigorous growth of Corsair Gaming (CRSR 1.22%) shows a bullish outcome is possible by following this strategy. Other approaches might result in a turnaround, too.

During the brief Q2 2021 earnings call, CEO Matt Furlong did not mention any massive changes of direction or daring new initiatives taking the company in a fresh direction. Instead, he appeared to focus on saying GameStop would work at doing what it is already doing, just a bit better. For example, he mentioned how the company's new fulfillment centers "will position us to further expand selection and expedite shipping." He also remarked how GameStop "grew our catalog by adding new products and leading brands across consumer electronics, collectibles, toys, and more."

Nothing in these statements appears to indicate GameStop is doing anything to get itself out of the rut that caused its slow decline in the years leading up to 2021's short squeeze. Of course, it is quite possible GameStop's leaders have a plan or are in the process of developing one. But if so, the conference call didn't reveal or even hint at it. Significantly, the eight-minute earnings call did not include a question and answer session, nor did the company provide any guidance.

At this point, those investing in retail stocks or video game stocks should probably avoid investing heavily in GameStop, given the uncertainty of its future and the extreme volatility of its share price. Nor should investors entirely write it off. There is likely to be a significant downward correction in price at some point when enough retail investors lose interest, and those remaining can no longer hold the share price up. Watch for this drop; if it's accompanied by the development of a transformational strategic plan rather than half-measures, it could represent a buy-in point for optimistic investors willing to accept the risk.