The airline's alliance with American is getting a skeptical look from regulators.

Shares of JetBlue Airways (JBLU 0.91%) traded down as much as 5% on Tuesday afternoon on reports that regulators are preparing to challenge an alliance between JetBlue and American Airlines Group (AAL 2.24%). That would be unwanted turbulence for the airline, and the threat has investors heading for the exits.

JetBlue is a well-regarded airline, but it offers a niche product from a limited number of focus airports. The company throughout its history has attempted to broaden its reach via partnerships, and last year announced a wide-ranging alliance with American designed to improve both airlines' competitive positions in Boston and New York. 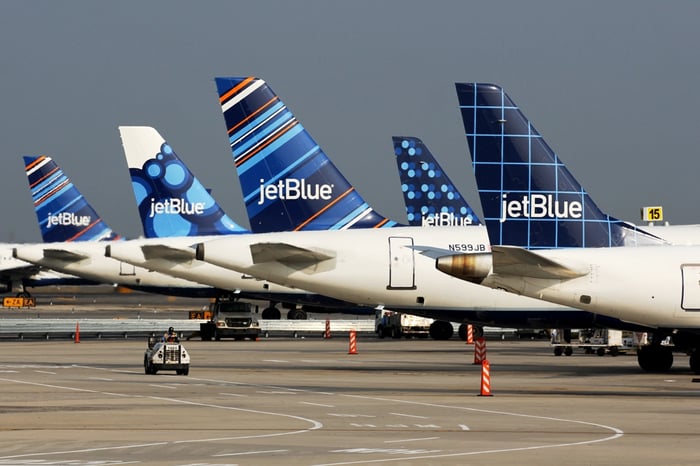 The two airlines won Department of Transportation approval for the alliance, and in recent months have rolled out plans to share loyalty benefits and coordinate on certain routes. But there were indications the Department of Transportation had a skeptical view of the partnership, and according to a Tuesday report in The Wall Street Journal a formal challenge on antitrust grounds is imminent.

The DOJ is concerned that by coordinating, the two airlines will limit competition on certain routes and drive up fares. The carriers agreed to give up some takeoff and landing slots in Washington and New York and agree to certain restrictions to win Transportation Department approval, but apparently that was not enough to put Justice at ease.

The airlines have countered that by working together, they can better mount a competitive challenge to Delta Air Lines and United Airlines Holdings in what are crowded airports where neither JetBlue nor American have unfettered ability to grow on their own.

A DOJ challenge is not necessarily a death knell to the alliance, but it would certainly complicate the airlines' plans. It is possible that added conditions could address any government concerns and allow the alliance to proceed, but if nothing else a challenge would mean the airlines would be unable to act as fast as they had hoped.

JetBlue doesn't need the partnership to survive, but it represents the airline's best chance to grow and gain more of a loyal following in markets where it already has a loyal following and a strong customer base. The DOJ's involvement is clearly an unwanted headwind, and it appears some investors aren't interested in hanging around to find out how it is eventually resolved.

Why Airline Stocks Are Down Today
351%