For investors who are sitting on cash, watching the S&P 500 index move higher this year with only minor corrections has been a frustrating experience. Missing out on big returns can be stressful, especially when money earns next to nothing in the bank.

But it's important to remember this golden rule of investing: Time in the market is more important than timing the market. The precise moment that an investment is made becomes less important with a long-term time horizon.

You can start your journey with these two stocks that could grow fivefold by 2030, and they can be bought right now. 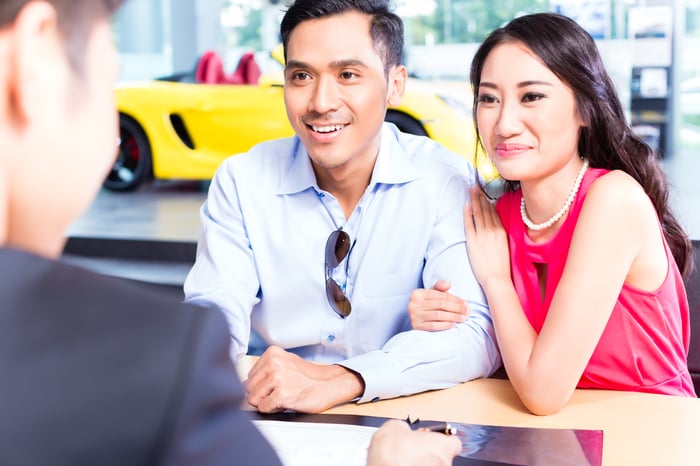 The case for Upstart

Artificial intelligence (AI) is a technology that will play a pivotal role in the future of business. It can help to complete complex tasks that weren't previously possible with human input, and fintech company Upstart Holdings (NASDAQ:UPST) is applying it to the lending process.

Where most banks assess a borrower's income and assets to determine creditworthiness, Upstart's AI platform reviews thousands of data points, including where the borrower went to school, their level of education, and their job history.

The company originates loans for banks in exchange for a fee, and it also licenses its platform to banks so they can integrate it into their existing application processes. The alternative metrics measured by Upstart's AI result in 173% more money loaned out for the same level of risk, and that's an attractive proposition for financiers.

The company would have to grow revenues at a compound rate of 19% per year until 2030 for its stock price to rise fivefold, assuming its current price-to-sales ratio remained exactly the same. But as evidenced by the table above, it has plenty of room for multiple contraction with a much-faster 90% compound annual growth rate ovr the past four years.

There's even significant upside potential to Upstart's financial performance. It just entered the automotive lending market, which is worth over $1.1 trillion, so considering that the company only originated $2.79 billion worth of loans in the most recent quarter, there is an enormous growth opportunity ahead.

To speed up its expansion in this new market, it acquired software company Prodigy. It develops sales tools for car dealerships, and Upstart is integrating with that platform for the opportunity to finance some of its $1 billion in quarterly vehicle sales.

Trillion-dollar social media giant Facebook (NASDAQ:FB) is embarking on a new mission to own the next generation of social technology. CEO Mark Zuckerberg wants to build a digital world dubbed the metaverse, with user-controlled avatars, virtual experiences, and even its own economy.

But back to present reality: Even in its current form, Facebook is growing enough to turn $200,000 into $1 million by 2030. The company has bucked the trend of past technology behemoths, in that it has remained nimble enough to drive innovation and stave off the irrelevance that befell them -- few people under the age of 30 remember MySpace, after all.

It has achieved this through landmark acquisitions of platforms like Instagram and WhatsApp, and also by consistently freshening up its flagship social network, Facebook. Over 2.9 billion people engage with the company's ecosystem each month, and that's not easy for any new player to disrupt.

It's in the driver's seat to introduce new initiatives like the metaverse, which might one day have the potential to truly dwarf the company's present financial performance.

Facebook's stock has delivered returns exceeding 800% since its debut as a publicly traded company in 2012, and there's a legitimate argument that it's still cheap right now. At 25 times projected 2021 earnings, it trades at a steep discount to the Nasdaq 100 index, which Facebook is a part of, at 36 times.

With a decade-long track record of growing revenue and earnings by over 40% compounded annually, Facebook remains a safe bet to pull off fivefold growth over the next 10 years. Even if its earnings growth were cut in half, and its price-to-earnings ratio of 25 remained the same, it would still get there.

But additional upside for Facebook could come from new projects like the metaverse, and investors are in great hands with this company when it comes to innovation.