It's much easier to remain a market leader than it is to become one, making these three names must-have holdings for nearly any investor.

When most investors are looking for new stocks to buy, they consider things like their risk tolerance, preferred holding periods, and the ultimate timeframe for reaching their goals. Since every investor is different, so too are the mixes of their holdings. Different stocks check off different boxes.

There's a small handful of solid names, however, that could be at home in any investor's portfolio. Here's a rundown of three of the best of these all-purpose prospects.

It's not a company that needs much of an introduction. Alphabet (GOOGL -0.55%) (GOOG -0.44%) is of course parent to the world's most-used search engine, Google.

What may not be fully appreciated by investors, however, is just how dominant Alphabet is within the search engine arena. GlobalStats' statcounter indicates Google is the go-to means of searching the web for almost 86% of the world's computers.

It's not just on the search engine front where Alphabet dominates its respective market, either. It's the heavy hitter of mobile operating systems too, with Android installed on nearly 73% of the world's actively used smartphones and tablets.

As was the case with search engines, that's a lead Alphabet has enjoyed for a while as well, positioning it perfectly to not only serve as a search engine on mobile devices (95% of them, again according to GlobalStats), but as the easiest platform for downloading apps and other revenue-bearing digital content. All told, Google alone accounts for almost 60% of Alphabet's total revenue.

This is no small matter. While most industries change over time in a way that opens the door to new and better competition, the search business as we know it is likely here to stay. Ditto for mobility. Now that we've grown accustomed to remaining constantly connected, we're not apt to regress. Since we're already in the habit of "Googling" whatever we want to know and already familiar with the Android operating system, Google's dominance is well shielded for the indefinite future.

Walmart (WMT -0.10%) won't be winning any growth awards anytime soon. In fact, at the same time e-commerce giant Amazon is working to keep its growth in check, brick-and-mortar retailer Target is nipping at its heels. Many other companies would eventually crumble under such pressure. 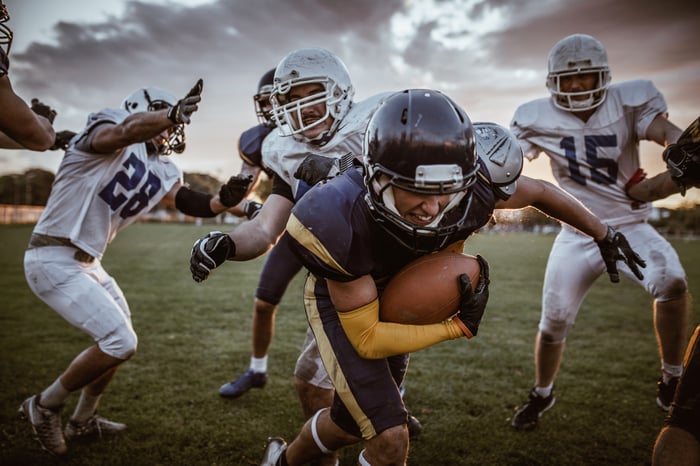 What's largely underappreciated here, however, is the sheer strength of the grip Walmart has on the piece of the retail market that's just not going to move online.

As of the most recent count, there are 10,524 Walmart stores peppered across the planet, with 4,740 conventional stores in the United States alone; that doesn't count the country's nearly 600 Sam's Club stores either. The company estimates that 90% of America's residents live within 10 miles of a Walmart, making it the most accessible physical retailer for roughly 300 million people.

Walmart isn't resting on the laurels of its geographical reach, though. It's also evolving into a lifestyle company that consumers feel more personally connected to. Locally brewed beers, health clinics, subscription-based delivery service for online orders, curated third-party sellers at Walmart.com, high(er) fashion private label apparel, and technology-installation services are now part of the retailer's repertoire. None are game-changers in and of themselves, but all of them together make Walmart a very easy name to keep shopping with.

These initiatives won't always translate into firm sales and profit growth, mind you. But they will more often than not, extending its streak of annual revenue growth that goes all the way back to the 1980s.

Lastly, add PayPal (PYPL -4.93%) to your list of unstoppable stocks any investor could use to drive reliable long-term growth in their portfolio.

Sure, other payment processing players have tiptoed onto PayPal's turf. Square has brilliantly penetrated the small merchant market that most payment middlemen were ignoring. Netherlands-based Adyen is carving out a respectable business outside of North America, although it's now making waves within the U.S. as well.

At the end of the day, though, the first big name in online payments is still the best way for investors to plug into the growing disinterest in cash. PayPal still controls anywhere from 50% to more than 90% of the digital payment market, depending on how you count share and who's doing the counting.

One thing's for sure. though. That is, regardless of how you tally it, PayPal isn't being dethroned. Indeed, in 2020 -- a year in which rivals had a prime opportunity to attract new users -- PayPal's total volume payment grew 31%, and the company added nearly another 73 million actively used accounts to bring the total to 377 million. Guidance suggests this full year's growth will be almost as impressive.

Much like Walmart, however, PayPal is no longer limiting itself to its core payments business. The company is now reportedly eyeing ancillary businesses like stock trading after recently adding online savings accounts and cryptocurrency checkout to its app. The sky's the limit with these and other ventures that leverage the established brand name and its nearly 400 million active users.

3 Reasons I Plan to Avoid Selling My Stocks Until Retirement