Please ensure Javascript is enabled for purposes of website accessibility
Free Article Join Over 1 Million Premium Members And Get More In-Depth Stock Guidance and Research
By Bram Berkowitz, Keith Noonan, and Nicholas Rossolillo - Sep 26, 2021 at 7:30AM

The market's recent volatility may have you feeling skittish, but it has turned some good investing opportunities into even better deals.

The stock market has been on a bumpy ride in September. At one point on Monday, the Dow Jones Industrial Index dropped by more than 900 points, but on Friday morning, it was trading more than 300 points higher than where it started the week. This volatility is making many traders nervous, but it does offer opportunistic investors a chance to open new positions at better valuations.

We asked three Motley Fool contributors to tell us about stocks they've bought during this turbulent month that they think could be big winners. Their picks: Zynga ( ZNGA 1.45% ), UiPath ( PATH 4.03% ), and OppFi ( OPFI 5.00% ).

Keith Noonan (Zynga): When turmoil hit the market earlier this month, there was only one stock that I pounced on: mobile gaming leader Zynga. For investors who are interested in gaining exposure to the fast-growing video game industry, now could be a great time to buy the stock -- especially considering that its share price recovery has been weaker than many other leaders in the technology and entertainment industries.

With the company trading at roughly 21 times this year's expected earnings and 3 times expected sales, Zynga is a promising growth stock that's sitting in value territory. And the long-term outlook is solid despite its recent share-price slide. 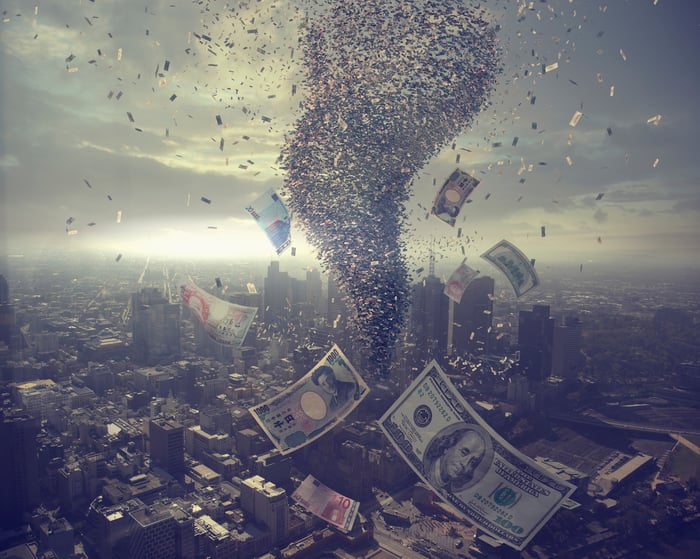 The video game publisher's stock price is now down roughly 38% from its 52-week high. The pullback stemmed from management's downward revision for this year's estimated bookings, as well as concerns that advertising-related changes Apple is making to its mobile ecosystem will close off some growth opportunities for Zynga. While diminished potential in the nascent in-game advertising market could be a significant setback for the company, the likely reason it lowered its bookings target for this year by 3% was its decision to slightly delay the release of an upcoming game, and shouldn't be viewed as signaling any material weakness in the business. This is still a company that's built to win the future.

Through internal development initiatives and a massive acquisitions push over the last decade, Zynga has built an impressive stable of development studios. It became the U.S.'s top mobile gaming publisher by revenue last year, and it has shown that it can sustain the life cycles of popular franchises and boost profits through regular content updates.

In the video game industry, it often only takes one hit new game to supercharge a company's performance and send shares soaring. Zynga sports powerful development and marketing resources, and its stock is trading at depressed levels, which is why it's currently my top gaming pick and one of my top picks overall.

This top software business falls hard after its IPO

Nicholas Rossolillo (UiPath): I've been holding off on scooping up shares of UiPath since it IPOed this spring, in part because of its sky-high valuation, but mostly because I like to see a quarterly report or two before buying a newly public stock. The automation software specialist has now delivered those financial reports, and with the stock down 23% from where it debuted, I've started picking up a few shares.

Just so we're clear, this is no value stock even after that tumble. Shares are currently trading for over 40 times expected full-year ARR (annualized recurring revenue). UiPath also isn't profitable yet -- although that's by design, since it's plowing all of its excess cash and then some into sales and the development of new software. But this is a fast-growing company with $1.9 billion in cash and equivalents on its balance sheet. Its guidance for full-year ARR implies 47% growth over last year.

So why did the stock slump? Though UiPath's management upgraded its growth outlook during each of its first two quarterly reports, full-year ARR growth of 47% would require a slowdown from the 60% growth it notched in the second quarter. While that's still nothing to sneeze at, UiPath's valuation was sky-high out the gate earlier this year. Now, a more pragmatic view is taking hold as investors adjust to the idea that as the pandemic's impacts on businesses ease, UiPath's rate of expansion will settle down to a slightly more pedestrian pace.

Nevertheless, UiPath has tons of potential as it helps businesses in an array of sectors get more efficient -- from banking and finance to healthcare to energy and utility companies. Its software bots, powered with machine learning, help automate processes, freeing up the time of human talent. Given the ongoing labor shortages, the appeal of UiPath's software technology to a growing list of businesses is understandable. Moreover, UiPath's customers tend to quickly ramp up their spending with it once they get started. Its dollar-based net retention rate was 144% last quarter, so its average client is spending 44% more with the company now than it did a year ago.

With this incredible momentum in mind, I made my first small purchase of UiPath stock this month, and I'll plan to add to my position over time if the growth story continues to play out favorably.

A fintech at a reasonable valuation?

Bram Berkowitz (OppFi): It's hard to find a promising fintech these days at a reasonable valuation, but OppFi ( OPFI 5.00% ), which went public through a SPAC merger toward the end of 2020, is one of the few.

OppFi is attempting to revolutionize the subprime lending space, which caters to riskier borrowers (typically with FICO scores below 600) who lack access to more traditional sources of credit. Its main product, the OppLoan, is an installment loan. On average, its customers borrow about $1,500 for an average term of 11 months -- funds they use to deal with an array of financial emergencies.

But this isn't your ordinary subprime lender. The OppLoan is just the beginning of what OppFi would like to offer to its underserved clientele. It's preparing to roll out many other products such as OppU, an educational program that reinforces good credit behavior and teaches financial literacy. It also seeks to enable successful OppLoan customers to access other products, such as a credit card with a $1,500 monthly spending limit. It's also exploring a more securitized lending product called SalaryTap, which would allow customers to pay off their loans by setting up direct payments from their paychecks, in return for which they would get those loans at lower interest rates.

OppFi is not just looking to serve each customer once. It aims to establish relationships with them and perhaps help its subprime borrowers become near-prime borrowers. Those longer-term relationships would also provide OppFi with more repayment data, which it could use to improve its credit underwriting models. Repeat customers are also much easier to underwrite, and OppFi has already demonstrated its ability to retain customers. It has a net promoter score of 85, which shows its customers are highly likely to recommend doing business with the company.

While the fact that OppFi operates in the subprime lending space may turn off  some investors -- and it does present some regulatory risks -- I like the company's story a lot, and believe it can differentiate itself  from its predatory peers. And it has been profitable for the last six years, which is rare for a young fintech. In the second quarter, it generated roughly $18 million in profits on adjusted revenue of more than $78 million. Management is projecting annual revenues in 2023 of $875 million, and the September sell-off has lowered OppFi's market cap to a paltry $867 million.