Please ensure Javascript is enabled for purposes of website accessibility
Log In Help Join The Motley Fool
Free Article Join Over 1 Million Premium Members And Get More In-Depth Stock Guidance and Research
By Jeremy Bowman – Sep 29, 2021 at 10:36AM

Here's what the newest cloud stock has to offer investors.

The tech boom during the pandemic has led to a hit parade of cloud stocks joining the public markets, including Snowflake, Palantir Technologies, and AppLovin.

To that list you can now add Amplitude (AMPL -1.90%), a cloud company that helps businesses improve their products with data. Amplitude debuted Tuesday in a direct listing, and the stock soared from its $35 reference price, opening at $50 a share and closing at $54.80.

What is Amplitude? Let's look at what the latest cloud debutante has to offer investors. 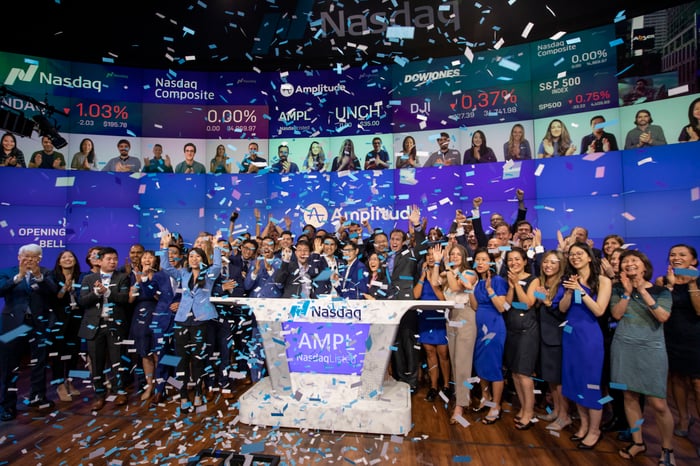 It's all about digital optimization

Amplitude is pioneering a new category of software it calls digital optimization, or helping companies maximize the return on their investments in marketing and products. Amplitude's software helps companies learn things like why a subscriber stops subscribing or what causes a user to be more engaged.

For example, Peloton Interactive used Amplitude to discover that social interaction was the key to increasing user engagement, so it introduced functions like high-fives and made its workouts more community-oriented. Amplitude helped guide Restaurant Brands International's Burger King in its Whopper Detour campaign, which offered anyone who downloaded its app a Whopper for just a penny if they were within 600 feet of a McDonald's.

In an interview with The Motley Fool, Amplitude CEO Spenser Skates explained that digital optimization is what comes after digital transformation. Companies must first build the tech infrastructure so they are able to operate seamlessly in a digital world. Once that is in place, they turn to digital optimization tools like Amplitude's to refine their marketing approach and improve their products.

Skates also noted that the company's customer base was initially mostly tech companies, but has now expanded to a wide range of consumer-facing businesses including Walmart, Ford, Comcast's NBC, Anheuser-Busch, and Burger King. In fact, the pandemic has pulled that transition, and sales growth has accelerated after a brief lull during the lockdown last year. Amplitude saw its biggest quarter of customer growth in the third quarter of 2020 as businesses realized they had to adapt to the realities of the pandemic.

The company has generated $129 million in revenue over the past four quarters, and revenue is up 57% in the first half of 2021, though that was aided by easy comparisons in the second quarter. In 2020, revenue increased 50% to $102.5 million. Amplitude finished the second quarter with 1,280 customers, and counts 26% of the Fortune 100 among its customers, showing it's gaining traction with the largest businesses in the country. It has 311 customers with annual recurring revenue above $100,000, and 22 above $1 million in ARR.

Like other cloud software companies, Amplitude aims to grow through a land-and-expand model, adding new customers and then expanding that relationship to new products and increased use. In the second quarter, Amplitude's net revenue retention was 119%, showing that existing customers on the platform increased their spending by 19%. On a generally accepted accounting principles (GAAP) basis, the company lost $24 million over the last four quarters.

Though the company faces competition from tech giants like Adobe (ADBE -1.01%) and Alphabet's (GOOG -0.77%) (GOOGL -0.85%) Google, it's the only pure-play stock in digital optimization, giving it a competitive advantage as this is the only thing it does and it's platform-neutral. Skates sees the challenge for the company as persuading chief product officers that Amplitude will improve their business. Beating out the competition is not the problem, as digital optimization is still in its early stages, with companies outside of tech just beginning to embrace it.

Amplitude closed its opening day with a market cap of $5.5 billion, meaning the stock is expensive at a price-to-sales ratio of more than 40. Given that price tag and the broader fallout in the market, investors might want to wait and see how the next couple of quarters play out for Amplitude. But considering the wide-open market in front of it and its upside potential, it's definitely worth adding the stock to your watch list.

How Amplitude Is Building Out Its Product Lineup
351%