Acadia Pharmaceuticals and Clovis Oncology may be turnaround stories in the making.

Biotech investing is a tumultuous process. Equities can stagnate for years while the multi-phase clinical process unfolds. And then, seemingly out of the blue, their share prices can explode higher following a positive trial result, regulatory outcome, or lucrative partnership. To come full circle, the once-high-flying equity tends to slowly but surely revert back to the mean due to the harsh reality of selling, marketing, and managing the lifecycle of a novel medication.

All that being said, biotech stocks in the middle of an important commercial launch or long-winded clinical trial can be powerful growth vehicles. Kadmon Holdings, for example, was essentially lost at sea until French pharma giant Sanofi swooped in to buy the company for a tidy $1.9 billion on a fully diluted basis. Biotech is chock-full of similar stories of early commercial stage companies floundering until a partner or suitor enters the picture. The lesson, if you will, is that investors shouldn't necessarily write off biopharma companies whose share prices have stagnated due to a commercial, clinical, or regulatory setback.

Acadia Pharmaceuticals (ACAD -0.96%) and Clovis Oncology (CLVS -9.94%) have both lagged behind the broader markets in a big way in 2021, even though they were super-charged growth stocks in the not-so-distant past. While there's no guarantee that either of these names will regain its prior form as a top growth stock, these two biotech companies do sport the type of key assets to spark a comeback. Here's a brief overview on the core value proposition of each of these stocks. 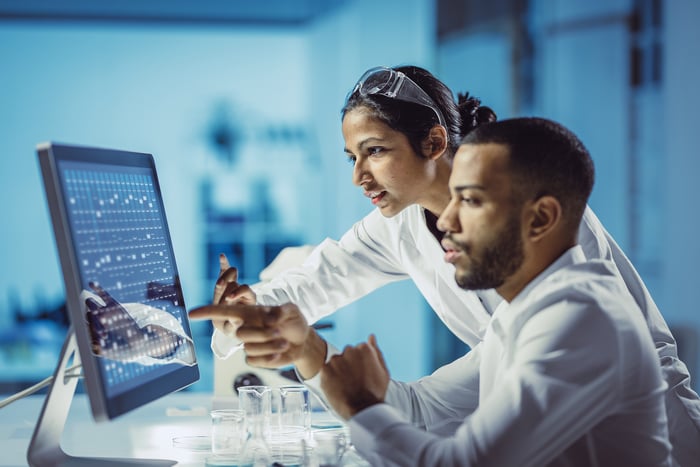 Acadia: Patience will be key

Acadia's shares are down by a jaw-dropping 68% so far this year, which is in stark contrast to its nearly 1,000% gain from Jan., 1, 2013 to March 1, 2021. The drugmaker's shares cratered back in March in response to a regulatory setback for its flagship compound, pimavanserin, as a potential treatment for dementia-related psychosis. The drug is already approved by the Food and Drug Administration as a treatment for Parkinson's disease psychosis under the brand name Nuplazid. And although Acadia's management expects the drug to possibly achieve sales in excess of $500 million for Parkinson's disease psychosis in 2021, this second indication was widely believed to be the key to push it into blockbuster territory (sales topping $1 billion per year).

The real problem with Acadia's plunge was that shareholders were apparently banking on this label expansion to trigger a buyout offer (based on its enormous premium prior to this drop). Blockbuster psych meds, after all, are a rare commodity. That value proposition, unfortunately, appears to be on hold while Acadia figures out how to advance pimavanserin's dementia-related psychosis indication. A new trial may be required -- which would take years to complete -- or the FDA might allow the drug on the market in some kind of limited capacity (certain patient subgroups with dementia-related psychosis).

What's the verdict? If you are willing to hold this stock for a minimum of three years, my hunch (and it's only a hunch) is that you will be richly rewarded. Nuplazid's sales should continue to inch higher for Parkinson's disease psychosis, and the company does have several other assets in the clinic, after all. The bad news is that Acadia is unlikely to change the narrative around its stock anytime soon. Patience, in turn, will be required with this name.

Clovis Oncology isn't the first cancer company to have a rough time following an FDA approval. But the fact of the matter is the bulk of these companies tend to either find a partner or land a sizable buyout offer. Clovis, on the other hand, has failed on both of these fronts. As a result, its shares have lost a whopping 84% of their value over the past 36 months. The biotech's stock, in fact, has now given back all of its 445% gain (and then some) over the seven-year span from its initial public offering in 2011 to 2018. What's noteworthy about this story is that the company has actually earned three high-value indications for its Poly ADP-ribose Polymerase (PARP) inhibitor Rubraca during this period. 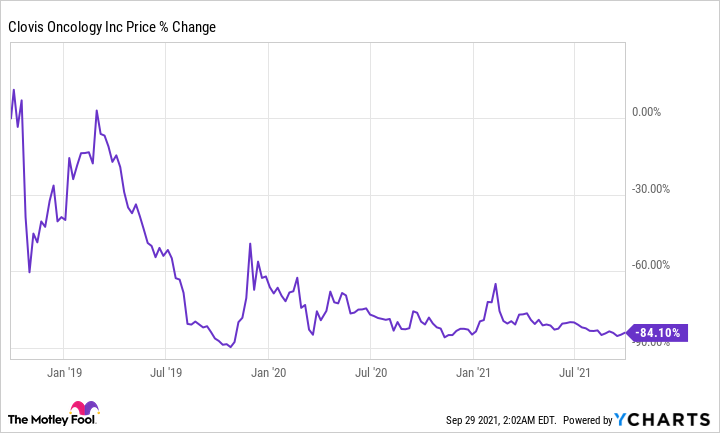 Despite these regulatory wins, however, the drug's sales are on track to dip by approximately 4% this year relative to 2020. The core reason is that bigger pharmas like AstraZeneca are absolutely dominating the PARP market with their own drugs. Clovis is hoping to flip the script with multiple label expansions within the next six to 12 months, but that scenario is wholly dependent on the upcoming trial data.

Can Clovis recapture its mojo as a once-high-flying growth stock? The answer is obviously yes, but with a big caveat. The company needs Rubraca to hit on at least some of its other solid tumor indications. Ovarian and prostate cancer alone do not appear to be the drug's sweet spot based on how it's performing relative to other drugs on the market.

What's the upside potential? Rubraca could still become a blockbuster drug over the next three years. What this means is that Clovis' market cap of $552 million at present would look like a bargain in hindsight. On the flip side of the coin, Clovis doesn't have a whole lot of room for error. Any major clinical setbacks could spoil the biotech's potentially juicy comeback story.

Why Clovis Oncology Stock Is Crushing It Today
363%